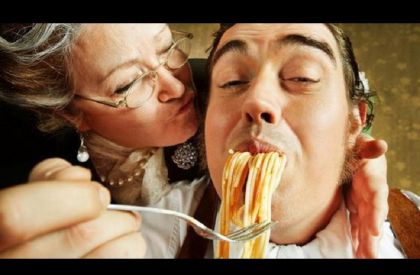 Let’s introduce our ten types of Italian men speaking a bit about cinema:

A few years ago, Italian cinema developed a trend: that of representing on screen stereotypical figures, characteristic of our country: the average Italian, with all his idiosyncrasies and peculiarities, comes in several forms and the silver screen exploited this creative line to the full. Take directors and actors such as Carlo Verdone: they brought stereotypical Italians to their extreme in a humorous way and created some of the most popular and well rounded characters of recent cinema. Although these films have left place to different formats in the industry, it is still possible to identify some of these stereotypical Italians: and be assured that each of us know at least one from every category!

Here our first among the ten types of Italian men of this article.

All four terms in the title express just one simple concept: being coarse and classless. This is the type of person wearing expensive clothes without having style, mixing colors or wearing shirts without buttoning them up, sporting heavy gold chains on a shaved chest. Tamarri are frequently noisy, love talking loud and are often associated to scarce culture. Regardless to their geographical origin, they always have a thick accent and often speak in dialect, rather than Italian. Their vulgarity is well known.  No matter the region, every burino has a common denominator: being rowdy and wanting to be noticed. Examples of burini and tamarri  are, for instance, Mario Balotelli, or the entire cast of The Jersey Shore!

A relatively new-entry in the realm of stereotypical Italians, but one that certainly deserves a place in our  ten types of Italian men list, is the  radical-chic. This is the type who wants to be different at all costs. Radical-chic Italians are slave to their own personal style and want to dress in a less ordinary manner, often displaying small details that make a difference. They want to follow a healthier  and eco-friendly lifestyle, usually eat organic and ride a bike. They like to see themselves as being working class, but in truth they, more often than not, come from wealthy families and live on daddy’s money. Radical-chic in Italy is what  hipsters are in the rest of the world.

Snobbish Italians are immediately recognized by the way they talk: they choose their words and intonation carefully, as they use both as a sign of distinction. Often wearing expensive clothes, which sometimes they cannot even afford, they only go out with their ‘peers’ and exclusively go to specific places, because they belong to upper social classes.

This is the best-known category of Italian men abroad, so it  had to be one of our ten types  of Italian men.  Northern European women often complain about this attitude when they meet Italians, apparently forgetting their own are not too different! It is in part true, though: plenty of Italian men (men in general, in fact!) are mama’s boys. Cuddled and spoilt by their mothers, they often have a visceral relationship with them and keep on considering la mamma the most important woman in their lives. The mammone is usually not a fan of houseworks and cooking, becuase his mother would have never let him do such things.

This is the man always looking for women to seduce. He is never content with one partner, but wants to date many, often all at the same time. And he manages, because the don Giovanni is usually good with his words and charming, to the point he does not always need to be good looking.  If a man is a don Giovanni, it is very unlikely that he will change so it is better to distrust this category, if one wants to have a love story.

The Italian imbranato is a bit of a dolt: he is awkward, often forgets things and is clueless when it comes to women and dates. In fact, he may often make a mess of a first encounter with a potential love interest. He seems to have a magnet for bad luck. Although he is frequently seen as a sfigato, a loser, he could actually turn out to be very funny and amusing thanks to his way of being.

This is the type of man who manages to create a two hour speech out of how a fork looks like. He usually wears glasses and it is better to study if you are meeting him, because you may feel as you were back in school. Bring a dictionary, or download one on your mobile to understand him when he talks!

The Forever Young no Matter I am 40 or Over

This is the type of person that, no matter his actual age, always feels young. Considering themselves not much different from 20 year-olds, they believe that age is a mere matter of anagraphics and registries, and that what truly counts is the age they feel inside. They go clubbing every weekend, they often get drunk and they are never old enough to have a steady relationship.  Truth is this type of people tend to escape responsibilities and this is why they live this way: this is the reason why this particular category has been getting more and more numerous by the day.

This person is a maniac of precision. He always does things the right way and following specific criteria, often obliging people to conform. From very little issues like how to store things, or how to plan a day and how to organize stuff, to more serious matters like how to live and plan my life, the Preciso never bears lack of programs. This desire of being precise often turns into a real obsession.

Another spot on portrayal by Carlo Verdone: this time, “Il Preciso”

This type of man is usually broke, but thinks it is important to pretend to have money to make friends or find a girlfriend, so he acts consequently. Unlikely the snob, he does not feel the need to have a high social status and to show it around: it is all about money and showing off material things. Showing to have money, often by driving expensive cars of dressing and behaving flashingly is the only way to be accepted or show self-confidence. One day, he will sell his entire family to buy a Ferrari. Therefore, do not be deceived by those who pretend to have money, because often there is nothing interesting behind their façade, not even cash!

As explained above, these categories are stereotypes and not all people in Italy fall into one. As in any country, we have normal and ordinary people, too, who do not live through their excesses, but rather just enjoy the way they are. Of course, any of us may find a tiny bit of one of the above characters within himself or herself: look out for which one!

An OBVIOUS man hater…
Sounds like your PERSONAL experience was with one each of these stereotypes. My dear, that’s your problem. Perhaps you chose these ‘men’ so, perhaps Anna, it’s you with some personal ‘issues’?
Shame on your bolstering age old false images from the 50’s 60’s and 70’s on a site that has such positive articles and upbeat comment on what is great in Italy. Wake up.
Russell Turco
A 100% Italian/American and proud resident of both countries

The “ten types of Italian men” are all negative and exaggerated characters. Way to perpetuate racist stereotypes against your own people.

When can we expect the article about women, featuring the buonista, the traditrice and the self-hater who demeans her own people for the amusement of an English audience? You could cite yourself as examples for all three.

P.S. Mario Balotelli is a nigger, not an Italian, and half the cast of Jersey Shore is of non-Italian ancestry.