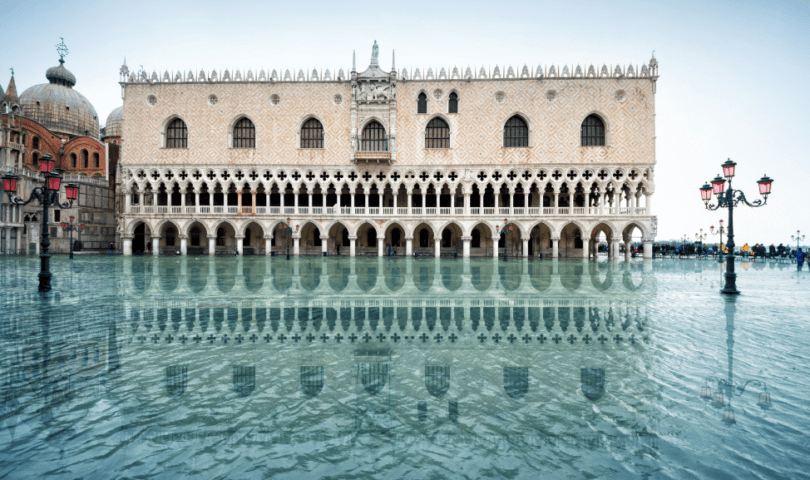 One of the main reasons behind the charm of Venice is the fact that it seems to be floating upon the water of the lagoon. However, the sad truth is that the city is actually sinking. How much is Venice sinking per year? The city sinks, on average, 1-2 millimeters per year! Venice has always lived on borrowed time, it is a city that should not exist – a whimsical maze of heavy marble palazzi and churches built upon ancient wooden piling sunk into a salt marsh. It is a miracle that Venice survived to the present day to face a threat that may end the life of this unique city: rising sea levels due to global climate change.

A major threat to the city of Venice is the extreme high tides known as “acqua alta“. This phenomenon happens when the water level at high tide is over 90mm (3.54 inches) above normal. In Piazza San Marco even a normal high tide can cause flooding in front of the Basilica. Severe “acqua alta” can cover nearly the entire city, with homes and businesses throughout Venice having to be evacuated.

Living at sea level is bound to bring in the sea from time to time. Venice was no exception throughout its long history, however, these abnormal high tides are becoming more and more commonplace. Venice now experiences more than 60 days a year of extremely high tides. Acqua alta is the most serious threat to the survival of Venice. The main cause behind the acqua alta is a more global concern: rising sea levels. With the warming of the earth, comes the melting of the polar ice caps. Former boat houses and even dwellings across Venice are now half-flooded with seawater due to rising sea levels. When the average sea level in the Venice lagoon rises, the city suffers.

The last bad flood was on November 12, 2019. The tide reached 187 cm, the highest since the historic flooding of 1966 when it went up to 194 cm. Water completely covered the crypt in the Basilica of St. Mark. Shops and restaurants suffered severe damages. Three vaporetti sunk, many others went adrift.

The flooding in November 2019.

The previous bad high tide was on October 29, 2018. Back then the water covered 75% of the town surface. This event was the worst in the last 10 years. Saint Mark’s Square was under 80 cm of water and people could not access it for security reasons.

The acqua alta is not the only threat La Serenissima has to face. For most of Venice’s history, earth subsidence was the greatest threat to the city. The very ground that Venice was built upon – low-lying salt marsh islands – was dissolving. Even before the rising sea became a concern, the foundations of Venice were crumbling underneath her. Every century would see Venice sink a few centimeters into the lagoon.

During the 1950s, mainland industries began extracting fresh water from nearby artesian wells. They did not understand that much of this freshwater actually lay below the city of Venice. When this water extraction became on large scale, Venice began to sink considerably. The city of marble would eventually crumble into the empty space below it. People stopped this practice and with it, they alleviated a very serious threat to Venice’s survival.

Today, there is still a problem due to the heavy and often reckless boat traffic speeding through Venice canals. Motorboats and large cruise ships create small but powerful waves that lap the stones lining the canals. However, underneath the stone and brick of Venice, the waves and salt are eroding away earth holding the city in place.

Sinking Venice: What is Being Done

The most popular as well as the most controversial solution to the sinking of Venice is a plan called the MOSE Project (Modulo Sperimentale Elettromeccanico). The idea is to create adjustable barriers existed since the 1980s and the project is still under completion.

The design permits the barriers to stay on the seafloor until there is a threat of acqua alta event. In case of necessity, the barriers can spring into action by rising to form a dam across the three entrances to the Venice Lagoon. Thereby they can keep the high water away from the city.

The controversy on MOSE project

The MOSE Project is not without controversy for both environmental and budgetary concerns that have delayed the final completion of the project, which should be complete by the end of 2021. The project has a budget of about 5 billion euros and is rotting even before its completion.

Environmental groups have voiced their concern about the overall health of the Venice lagoon in the wake of having the tidal ecosystem closed off from the sea for long periods of time. Venice relies on the tides to flush out its canals, severe acqua alta events could seriously damage the health of the local marshlands – essential as a fish hatchery as well home for the game and waterfowl that are traditional parts of the Venetian diet. Furthermore, in 2014 scandal of corruption and bribes concerning the project, brought to the arrest of 35 people and 100 politicians and functionaries investigated.

How can Venice be saved from sinking? Besides the MOSE Project, canal restoration, installation of more modern sewage systems and enforcement of boat traffic laws are all in their own way helping Venice to survive into the modern era. However the threats to her survival are still there and others, like increased rainfall from global climate change are rearing their ugly heads.