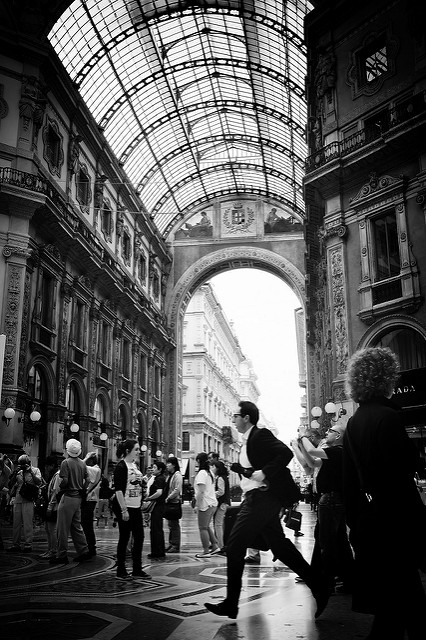 It only took me a week to realize the trackies belonged back in the suitcase, and I shouldn’t have even brought the sandals. The hoody could be kept at a pinch, but only for around home.

It’s an unwritten dress code, but one that I felt obliged to adhere to if I had any hope of fitting in.

In Milan, ‘fashion capital of the world’, the locals set the standard… and it’s high. Very high. Add to that, the high prices, high pollution levels, and relatively unfriendly Milanese, and it’s not such an enticing destination. Furthermore, the city has one of the lowest per capita quantities of park and green space in Europe. And yet, despite it all, Milan has an eminent reputation.

Before my impending move to Milan one year ago, I discussed it with a few people. They all had the same response, “Wow, Milan!”. Milan boasts highly thought of associates, and naturally the name fuels enthusiasm. It’s a city often talked about in the same breath as London and New York, however, at the same time, it comes off as their inferior urban cousin.

Name-dropping has resulted in Milan carrying an air of class, wealth, and style, but once living in Milan, you get the impression the hype surrounding the city is self-created by its own kind – a product of the self-confident Milanese themselves and maybe debatably deserved. But no matter how you cut it, the city and its inhabitants, warrant admiration.

Even after a year of living in the centre (of the centre) of Milan, I am still mystified by the city and its aura. I’ve fallen in love with all there is to love, and hate, about Milan, and I’m in no hurry to leave, nor am I alone. The origin of Milan’s magnetic strength is ambiguous, but its existence is undeniable.

During the war, Milan fell victim to heavy bombing from both the British and the Americans, destroying what was once spectacular architecture. The city was slow to rebuild in the post-war years leaving Milan in a state of chaos, and severely lagging behind other Italian cities in the beauty poles. Albeit the 15th Century gothic-style duomo in the city centre, Milan lacks impressive building design, making it arguably ‘un-Italian’, and increasingly more westernized. But beneath the modernity, the classic way of life still seeps through – the Italian male charm produces cafe served with heart-shaped froth on top, and water-cooler conversations revolve around friendly banter between supporters of Milan and Inter, the city’s two rival calcio teams.

Today Milan is a bustling commercial centre, home to about 1.4 million people. The city is, at the same time, trying to integrate with the rest of Europe by featuring prominently on the ‘serious’ world financial stage, and retain its own reputation for ‘chic culture’ of fashion and freedom. And it’s hard to say which is more dominant. A stroll through the famed ‘Quadrilatero’, of window to window top-name shops denotes fashion winning out, but a rough tally of banks in the city centre would convey the opposite impression.

Milan owes its commercial success largely to location. As the capital of Lombardia, Italy’s richest region, the city lies close to the country’s European neighbors and in the heart of an industrial province. As the financial hub of Italy, the stock market is situated here, and business motives are at the forefront of the minds of most Milanese. With the commercial sector dominating the city, it’s little surprise the western world has infiltrated Milan more than other Italian cities. It’s here that work opportunities are rife, especially for foreigners.

Christiaan Guthrie (33) knows all about it. He is a fellow New Zealander, who made the transition to Milan at the end of 1999 to take up a rugby contract with ASR Milano, and he’s still here. He continues to play rugby, but says it’s no longer a dominant part of his life. Instead, Guthrie has adopted the Milanese work ethic, as a business entrepreneur.

He started the company ‘Corporate English’ from scratch three years ago to fulfil the growing demand for English language schools, primarily serving employees of Italian companies. Since then, he’s become absorbed in Italian life, including wedlock to an Italian girl two years ago.

“I miss the relaxed way of life and ease of living in New Zealand. Over here, everything is a little bit more complicated, it’s all a little bit harder.
“I guess (it’s difficult) because of the beaurocracy, but once you get inside the minds of the Italians, and have learnt the language, you’re on a level playing field,” says Guthrie. He continues to play rugby, but says it’s no longer a dominant part of his life. Instead, Guthrie has adopted the Milanese work ethic, as a business entrepreneur.

But he’s quick to point out, the playing field isn’t always level, especially in the fashion stakes.
“There’s no way you can wear bare feet in the supermarket over here, and if you wear sandals in the city people look at you like you’re an alien.”

So has he made sacrifices to mix and mingle with the locals?

“Yeah, I’ve changed a little bit, I suppose. I’ve become conditioned to things I used to think were weird. “

Guthrie says these day-to-day oddities he used to be shocked by, have now become second-nature.

“You know, the Milanese have totally winter clothes, and totally summer clothes. And if it’s summer stuff, you definitely wouldn’t keep it in your wardrobe in winter, so you have to take it all out. In New Zealand, I’d never have thought to do that.

“This year I did it, and then I sat down on the couch and thought, ‘What am I doing? What have I become?'”

“But I don’t think I’ve changed my fundamental beliefs. It’s all just material.”

But then, materiality is what Milan’s all about.

As with the city, Milanese people are renowned primarily for their lifestyle and their looks. Beyond the pretentious image of mobile-toting fashion victims, the Milanese are self-assured, hard-working business moguls. Add to this, their innate passion for self-indulgence, and the resultant ‘sense of style’ is a given.

But while business and pleasure may be of equal importance in Milan, the two remain distinctly separate. The Milanese go about their day purposefully, and no one wanders aimlessly, regardless of the hours they must spend in shops. It’s a city obsessed with hurrying. One of my first conversations with an Italian man illustrated the mentality of the Milanese.

He said: “When you walk down the street in Milan, no one will dawdle, everyone will move with purpose. You will not catch anyone’s eye. Nor will you smile at them. But if you were to attempt a conversation with the man on the street, and asked him where he was going in such a hurry, he wouldn’t know. But he’d have to go immediately.”

Guthrie says it’s this attitude that identifies the Milanese from the rest of Italy.
“And they’re ‘beautiful’ people! say that in quotations, of course,” he adds.

It seems the classic ‘chicken-and-the-egg’ argument. Are the Milanese ‘chic’ because they live here, or is the city ‘chic’ because of its inhabitants?

As a city of synthetic beauty, Milan is a grave contrast to ‘100 per cent natural’ New Zealand. From the buildings to the streets, to those who walk them, Milan is distinguishable. Beneath the unbearable squalor of filth, it’s an influential city of style and sophistication.

One year on, I can’t define the origin of Milan’s reputation or even argue that it is a well-deserved reputation, but as a city, it has something powerful. With a year of living in ‘fashion capital of the world’ Milan under my belt, I’m a ‘modified’ girl. Not changed, just modified. When the situation calls for it, I have the wardrobe to suffice. And when the pressure’s on, I have the attitude to cope.

In fact, I could nearly pass for ‘Milanese’ citizenship, I’m just not sure that’s such a good thing.