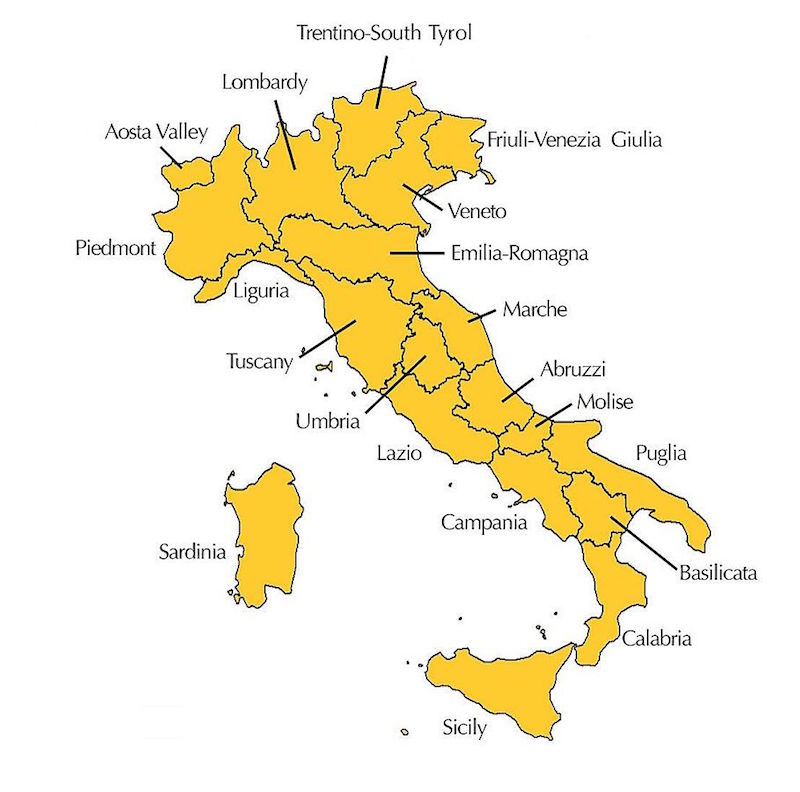 This is the smallest region of the country, a little gem right on the French border. Home of the Mont Blanc, the highest mountain in Europe, and the tunnel that connects Italy to France, Valle d’Aosta also has one of the most beautiful natural parks in the world, the Gran Paradiso. Famous not only for its mountains, but also for its castles, this region, with a population of approximately 127.585 is a true paradise and it was the favorite vacation spot of Pope John Paul II.

The Riviera of Liguria is the Italian version of the Côte d’ Azure. With approximately 1,615,000 inhabitants, Liguria is the region of Genoa, hometown of Christopher Columbus, and the city that gave its name to blue jeans. The cloth for jeans originally came from Genoa, and the word morphed: Genoa’s, genoas, jeans.  Every year the city of Sanremo, the capital of flowers, hosts a festival of Italian songs, and it is also the home of one of the four Italian casinos. The beautiful Cinque Terre is also a spot not to be missed in this enchanting and elegant land.

Piemonte (or Piedmont in English) has approximately 4,424,800 residents and is one of the most important Italian regions. It is the original home of the former Italian royal family, who initiated the unification of the country, and is culturally and traditionally the true cradle of modern Italy. Turin was the first official capital of unified Italy, as well as being the city of the headquarters of auto giant FIAT. Piedmont is also where the river Po (the longest in Italy) begins.

Lombardia is the economical engine of the country, very powerful and rich, home of approximately 9,859,625 people. It hosts the city of Milan, the Italian capital of finance and fashion. Famous for Bellagio and Lake Como, Lombardia is also known for the most important opera house in the world, “La Scala,” in Milan.

The region of Venice and Lake Garda is also one of the richest and most industrialized areas in the world. Famous for Verona and Padua, but also for the magnificent villas of Palladio. It has approximately 4,912,430 inhabitants, including the Benetton family, who started its Benetton empire in the region.

This area is a border region, and has suffered wars and natural disasters, but it is always proud and productive. It is famous for Trieste and its port, and is the home of approximately 1,229,992 people.

Approximately 1,017,240 inhabitants every day enjoy one of the most important mountain ranges in the world, the Dolomiti. Often the German language is actually preferred to Italian here.

Emilia Romagna is the land of good food, especially good pasta, and where the motor powers Ferrari, Maserati, Lamborghini, and Ducati were born and still have their world’s headquarters. Parma is the capital of food and Bologna is a true  beauty of art and culture. It is a very important agricultural center, especially for the presence of the Po that crosses the region. Approximately 4,322,830 people live there.

Toscana: the home of much Italian culture and where the Italian language was born, as was Dante Alighieri. Florence, Pisa, Siena, Arezzo, Pienza, and Lucca make up a unique series of art cities, difficult to equal anywhere else. Approximately 3,734,355 live in this region,  famous also for its countryside and its vineyards, where Chianti and Brunello are made.

Approximately 903,679 people live in Umbria, a smaller version of Tuscany. The Marmore waterfalls refresh its countryside, while cities like Orvieto and Perugia attract millions. One musn’t forget the beauty of Assisi, the world capital of peace and the hometown of St. Francis and St. Claire, where Giotto left some of his best work.

Check out the second part of our excursus on the Regions of Italy in Summarizing 20 Regions II: the Central and Southern Regions.