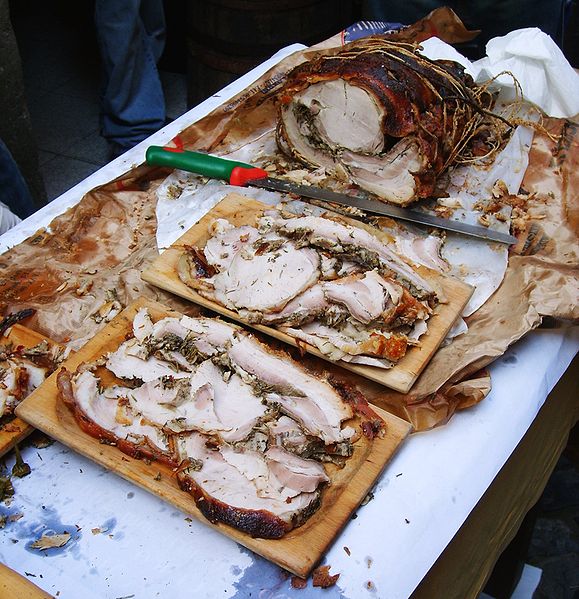 What is a sagra

The sagra is an Italian festival, organized in some towns, or regions, and is always linked to a local tradition or food celebrated in the course of the event.

The term sagra derives from Latin. It is the evolution of the adjective sacrum, meaning holy, which explains the original purpose that gave birth to this type of event: the religious factor. In fact, in the past the sagre were mainly moments of union between Man and spiritual and holy life.

The ancient sagre were, for their religious connotations, celebrated in front of temples or churches during the Christian Age. Moreover, animals were sacrificed and products offered in the course of the celebration.

Nowadays, the sagre are still part of the Italian tradition, but they have acquired a new meaning and function. In fact, they are local festivals often born from local and historical traditions or sport events. The real protagonist of the sagra is certainly food and sometimes particular sagra are born from the enhancement of some local food, acquiring the name of that particular food.

Many sagre are deeply rooted in old fairs but they now have tried to adapt to modern times. In fact, in the past these festivals were confined to the local inhabitants but they are now an important tourist attraction, both nationally and internationally.

Sagre are organized all over Italy, in several towns. Most of them are dedicated to some common ingredients such as mushrooms, local cheeses, pork, or truffle.

The best Sagre in Italy

There are some important sagre that take place each year in every region of the country. Here is a short list of some of the most famous sagre, listed per month.

This event takes place in Naples on January the 17th. The town is lit up with bonfires called “cippi.” People celebrate Sant’Antonio, Saint Anthony, around the fire. The typical food served is soffritto, a soup based on pork meat.

This festival is based on a traditional food: the panicelle, a typical bread of the area of Chieti that presents the shape of a hand; the bread is distributed to the population after having been blessed.

This sagra is based on a funny tradition, according to which people go up to the hills and say aloud: “Trato Marzo.” The sagra lasts three days during which funny events and tricks take place.

This is celebrated on Easter Day and it is based on a theatrical performance of Good fighting Evil in the main square. The stage is divided into two parts: on one side is heaven and on the other, hell. The performance focuses on the characters, representing the two opposite and contrasting worlds.

This festa finds its origins in the Renaissance and it was celebrated in honor of spring. It is accompanied by a local representation with characters symbolizing episodes of the Middle Age.

This event is based on a local folk tale. The town is full of colors and the inhabitants of Brindisi parade with a white horse, il cavallo parato, that carries the tabernacle on its back along roads full of flowers.

This fish and potatoes festival takes place from July 22nd to August 16th at the Barga Football Stadium “Moscardini.” Starting from 19:30 people can taste fried fish and chips. However, other dishes are served such as grilled meat, cold dishes, and home-made cakes and desserts.

This sagra is accompanied by music entertainment and dancing. Moreover, there is a special area for children where they can play.

This is a typical sagra celebrating wine and it includes a visit to several wine cellars where many different types of local wines can be tasted. The event is also linked to a historical tradition, according to which the abbot Defuk made his servant select several taverne, taverns, having the best selection of good wines. It is in Montefiascone that he found a wine, Moscatello, which was judged as the most delicious of all. In honor of this wine sagra, the inhabitants of Montefiascone stage a parade reminiscent of the event.

This sagra is based on a one-week celebration in honor of the Madonna dei campi, the Virgin Mary of the fields. In this festival is an opening bonfire, and it closes with a lottery where a veal is put up as a prize. Local biscuits, mostaccioli, and “nzudi” are served during the festival.

A little church is dedicated to the Madonna in a little town near Palagiano. On the first Sunday of October the inhabitants of Palagiano gather to go to mass celebrated by the local priest.

Later, the pagan festival takes place: tagliatelle with tomato sauce are served on tractors and given to the participants.

The festival was established in 1631 when the town was freed from the plague. Starting from that moment the Virgin, Madonna della Salute, has been celebrated. Every year a procession is held and local cakes are served.

A traditional winter market is held with the festival of Lenna. It gives people a chance to buy presents for Christmas. Moreover, there are several local stands that attract many people, infusing the event with a wonderful Christmas atmosphere and enthusiasm.

This is only a short list of some festivals held in the country – many others are organized all over Italy, more than a hundred events. Therefore, check our articles on what to do on each month of the year to get more suggestions; but the best way to know about local sagre is to ask someone at the place where you are staying. Surely there will be a sagra not far from where you are.