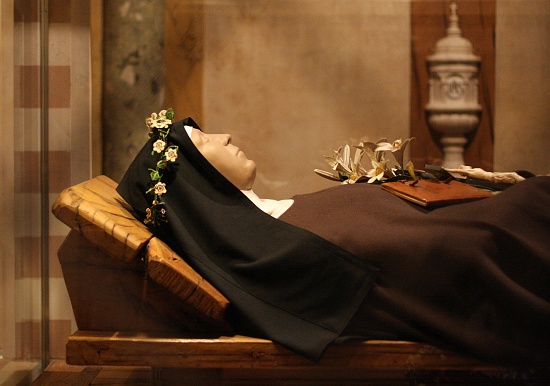 Visitors to certain Italian churches are often shocked by the display of a corpse, dressed in religious vestments and encased in a glass coffin at the high altar or in the crypt. What is most shocking is that many of these bodies are hundreds of years old and yet are still in excellent condition. These are the bodies of the mysterious incorruptibles, pious individuals whose remains do not decompose after death. The phenomenon of Incorruptibility is taken as a powerful sign of saintliness in the Catholic Church and most of these individuals have already been canonized. In the past when bodies have been exhumed, people were amazed to discover that the deceased looked as if not a day had past. While most relics of saints are reduced to bones or dust, the bodies of the Incorrupt are in excellent if not a perfect state of preservation.

The Catholic Church states that the body cannot be embalmed or mummified at death to be considered Incorrupt, which makes the phenomenon even more mysterious. However, the property of Incorruptibility is not permanent as some relics have now been reduced to only portions of the body or to a skeleton. The exact nature of Incorruptibility is yet unknown even with scientific examination, drawing the attention of both the skeptical and religious communities. Below is just a sample of the Incorrupt saints found in Italy, however there are many more to be found in churches and monasteries around the world.

Saint Clare (Santa Chiara di Assisi) was an early follower of Saint Francis of Assisi and is best known as the founder of the Poor Clares, the female order of the Franciscans. After a life of piety and labor, including miraculously saving Assisi from attack on two occasions, Clare died in 1253. Seven years after her death, the incorrupt body of the newly canonized saint was interred in the Church of Santa Chiara in Assisi. By the 19th century when a new crypt was built for the Saint’s remains, it was discovered that Claire was no longer officially Incorrupt, yet her skeleton was in perfect condition. Today Saint Clare’s remains lie in a state of repose, covered in a wax figure dressed in the habit of her Order.

Both the Franciscans and the Augustinians revere Saint Clare “of the Cross”. An extremely pious person, Clare dedicated herself to the passion of Jesus and was so devout in life that followers constantly worried about her health. After her death, it was discovered that she had the mark of the Cross above her heart, which was removed and placed in a reliquary. The rest of Saint Clare of Montefalco remains Incorrupt and is on display at the Augustinian church of Santa Chiara in the Umbrian town of Montefalco.

One of the most famous and unique of the Incorrupt Saints of Italy is Saint Catherine of Bologna, a member of the Poor Clares and Mother Superior of her convent. After her death in 1463 Catherine was buried without a casket, however she was exhumed only weeks later after a string of miracles and visions. Her Incorrupt body was venerated for over two centuries before being canonized. Instead of lying in a glass casket Saint Catherine of Bologna’s eerie remains are seated, her skin darkened by the constant lighting of candles. Besides the darkened skin, the Patron Saint of Artists is in a remarkable state of preservation.

Saint Rita, popular with Christian Pilgrims, is a patron saint of lost causes (along with Saint Jude). It is said that Saint Rita bore a Stigmata wound on her forehead, miraculously caused by the Crown of Thorns during one her of deep contemplations on the Passion. After several years of being bedridden from sickness and self-inflicted penance, Saint Rita died in 1456. Immediately after death her body is said to have performed miracles and had signs of Incorruptibility. After centuries of veneration of her Incorrupt body and numerous documented miracles, Rita of Cascia was canonized in 1900. The Saint’s body is still partially incorrupt and housed in the Basilica of Saint Rita in the Umbrian town of Cascia.

The town of Cingoli in Le Marche is home to the relatively obscure Saint Sperandia, a Benedictine nun who was known for her visions. Since her death in 1276, the Saint has been exhumed from her grave eight times, and currently rests in the Monastero di Santa Sperandia. Her still Incorrupt remains are one of several holy bodies that exude a sweet fragrance known as the “odor of sanctity”.

Although the Vatican has no official policy on embalming, many popes have chosen to forgo the process, most recently John Paul II. In the fairly recent past there have been two popes that have not been embalmed and are showing signs of Incorruptibility. Pius IX, known as Pio Nono to Romans and one of the longest lived Popes was buried in the crypt of San Lorenzo fuori le mura. In 2000, one hundred and twenty-two years after his death, Pius IX was exhumed and found to be in excellent condition and supposedly, still smiling. Pope and Saint, Pius X explicitly forbade any preservation of his body and when he was exhumed in 1944, thirty years after his death, the future saint was in such good shape that his limbs were still flexible. Today Pope Saint Pius X rests under the Chapel of the Presentation in St. Peter’s Basilica. Another popular Pope, John XXIII is also on display in St. Peter’s but he is not Incorrupt, his excellent state of preservation is due to embalming.