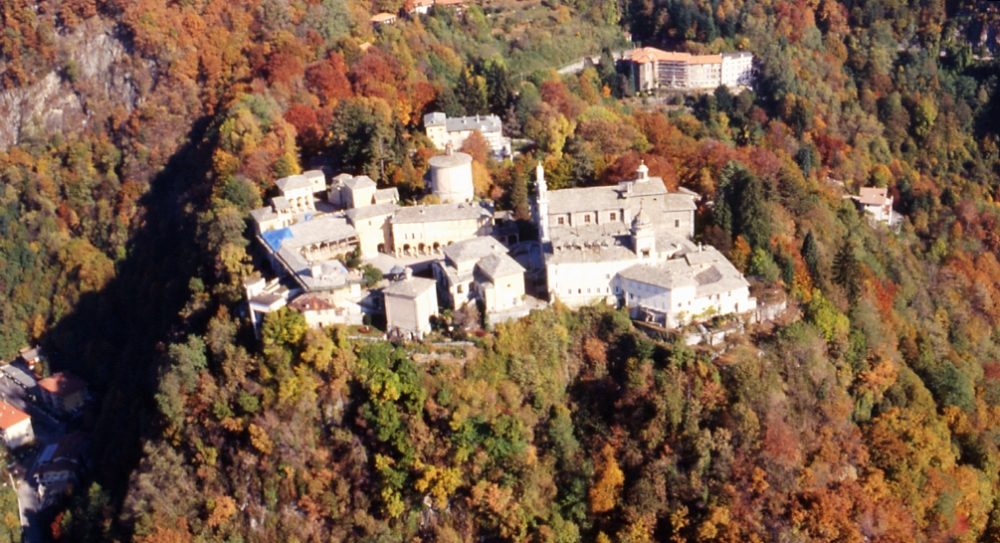 Shrines, Chapels and other Secrets in the Mountains of Italy

Be sure to read part two of this article!

One of the most important pilgrimage sites in Italy are the Sacri Monti, or Sacred Mountains, that are located in the northern part of the country. These mountains are actually nine groups of churches and chapels created in the 16th and 17th centuries. Along with their religious significance these structures are also noteworthy for their architectural features and wealth of amazing art. For these reasons the Sacri Monti were named as a World Heritage Site by UNESCO in 2003.

Among the wooded foothills and rocky promontories of Italy’s rugged landscape lie numerous mountain shrines and chapels. Founded by local saints, hermits or more often by the discovery of a miraculous icon or statue, these sacred mountains and their shrines are still popular destinations for the faithful. Most of these mountain shrines are dedicated to the Virgin Mary and the Mysteries of the Rosary, however others venerate popular patron saints like Francis of Assisi.

These shrines are usually in locations surrounded by majestic dense woods and sparkling lakes, and the structures are filled with beautiful frescoes and statues. The chapels built among the sacred mountains depict various important episodes in Catholic religious life and are filled with religious imagery. The idea of the Sacred Mountain devotional complex built on the slope of a mountain dates back to the late 15thcentury when it was popular throughout Europe and eventually spread to the New World.

Most of the Sacred Mountains listed here date to the times of the Catholic Counter-Reformation while others have a much older history, being worshipped even in pagan times.

Located in Varallo Sesia, this sacred mountain is the oldest of the nine and acts as a symbolic pilgrimage to Jerusalem. Since an actual pilgrimage to the Holy Land became increasingly dangerous, churchmen from Milan decided to create this New Jerusalem for pilgrims to visit. This and the other Sacri Monti were used as tools of the Catholic Church to combat the growing Protestant movements of Northern Europe. The complex consists of a Baroque basilica and over forty chapels containing life-size figures that are grouped according to the sacred sites of Jerusalem.

The work on Mount Varallo began in the 15th century and the chapels here have been richly decorated with frescoes, paintings and images that depict various scenes from the life of Christ. There are 45 frescoe-laden chapels in all that hold more than eight hundred statues.

Begun in 1589 on a peaceful wooded hill, this series of twenty three chapels (built in the 16th, 17th and 19th centuries) is dedicated to Santa Maria Assunta. The older chapels are decorated with marvellous frescoes and terracotta sculptures by famous artists while the newer chapels have much simpler adornments. The sanctuary lies behind the devotional path of the Sacro Monte and houses a venerated statue of the Virgin Mary. Local tradition states that this statue was placed there by Saint Eusebius of Vercelli, a 4th century Bishop.

Dedicated to the veneration of San Francesco, this sacred mountain is located in the province of Novara. The complex contains twenty chapels depicting the life of Italy’s Patron Saint. Among the wooded lanes and chapels lies the Basilica di San Nicolò, where the picture of the Madonna of the Pity is still the object of an ancient religious cult.

The 12 chapels depict various scenes from the life of the saint. Construction began in the 16th century and took over a century to be completed. The chapels have been decorated with beautiful frescoes, statues and other beautiful works of art.

Dedicated to the Mysteries of the Rosary, the Sacro Monte is comprised of fourteen peaceful chapels built along a mountain path. The Sacred Mount has been a site of worship for centuries, with legends attributing its origins to Saint Ambrose of Milan. The Sacro Monte di Varese is the site of a yearly a pilgrimage commemorating the origin of the Via delle Cappelle in 1604. The wealthy families and nobles of the area contributed heavily and supported the cause allowing the chapels to be built quite quickly.

The Mount of Oropa is located close to the city of Biella and its complex was built in 1617 and consists of 12 chapels dedicated to the life of the Virgin. The chapels were built in parallel rows and have varying interior designs.

The twelve chapels lie along a path winding its way up the mount and depict the life of the Virgin in fresco and with brilliantly painted terracotta figurines. The Sanctuary of La Madonna di Orta, a house of worship that pre-dates the mountain chapels, houses an ancient Black Madonna.

This complex is located on the Western shore of Lago di Como and is comprised of fourteen chapels dedicated to the Blessed Virgin of Succor (Madonna del Soccorso). The legend of this sacred mount is the familiar tale of a statue of the Madonna being discovered and moved, only to return to its original location. However according to the ancient writer Pliny the Younger, this location was once dedicated to Ceres, the Roman goddess of agriculture.

The construction on this mountain started in 1635 and 15 different chapels were built, dedicated to the Mysteries of the Rosary. The architecture is mostly Baroque in style and has been decorated with beautiful terracotta and stucco works. The frescoes on the interior walls were painted by several famous artists.

The Sacro Monte della SS.Trinità di Ghiffa is located in a peaceful nature reserve overlooking Lago Maggiore and dedicated to the Holy Trinity. The complex, mostly the work of unknown artists, is incomplete but enjoys beautiful views of the lake below and the surrounding mountains. There are three main chapels on the mountain and two small ones that have been joined to the Sanctuary of Via Crucis. The larger chapels were built in 1605 over the remains of an old medieval oratory. In the 18th century various elements were added like frescoes, the portico and the stone columns.

The sacred Mount of Domodossola is the northernmost of the Sacred Mountains. The path to its complex starts from the center of the town of Domodossola and leads up the hill. The construction on Domodossola was started in 1656 by the Capuchin monks of the area. The local citizens also contributed substantially to building the complex in terms of labor and money.

This sacred mount is a Capuchin Calvary. Fifteen chapels dedicated to the Stations of the Cross (Via Crucis) are spaced along the devotional route leading to the final two chapels in the Santuario del SS. Crocifisso at the summit of Monte Mattarella. The beautiful Sanctuary of the Crucifix, which holds two chapels, was built in 1657. All the other chapels in the area were built in different locations on the mountain. It took over two centuries to complete the complex. The architectural styles of these structures range from Neoclassical to Baroque.

The Sacro Monte complex is also home to an oratory dedicated to an ancient fresco depicting the Madonna delle Grazie.

Also dedicated to the Stations of the Cross, the Sacro Monte di Belmonte is a Calvary with a sanctuary, some chapels and a pilgrim route.

Mount Belmonte is located above the town of Valpergo in the province of Torino. The mountain looks over the landscape of Piedmont. The idea to create a religious complex in this naturally beautiful area was originally spawned by Friar Michelangelo da Montiglio, who put together a team of artisans to bring his vision to life. Work began in 1712 and took over a century to complete. Inside the complex on Mount Belmonte is a sanctuary that dates back to medieval times and that contains thirteen chapels dedicated to the Passion of Christ. The chapels were built on a circular path surrounded by chestnut and oak trees as well as large rocks that have a pinkish hue.

The architecture of all the chapels is drawn from nature and they have large halls and a circular layout. The Number 1 and Number 8 chapels are the most important as they contain the most artistic works including beautiful terracotta sculptures. Several frescoes used to decorate these buildings have also recently been discovered

The Sacri Monti of Piedmont and Lombardy are one of the most important religious pilgrimage sites in Europe. The beauty of the area, as well as the architectural and artistic treasures within the churches, make it a wonderful place to visit for non-religious purposes as well.

Be sure to read part two of this article!

By Justin Demetri and Ancos