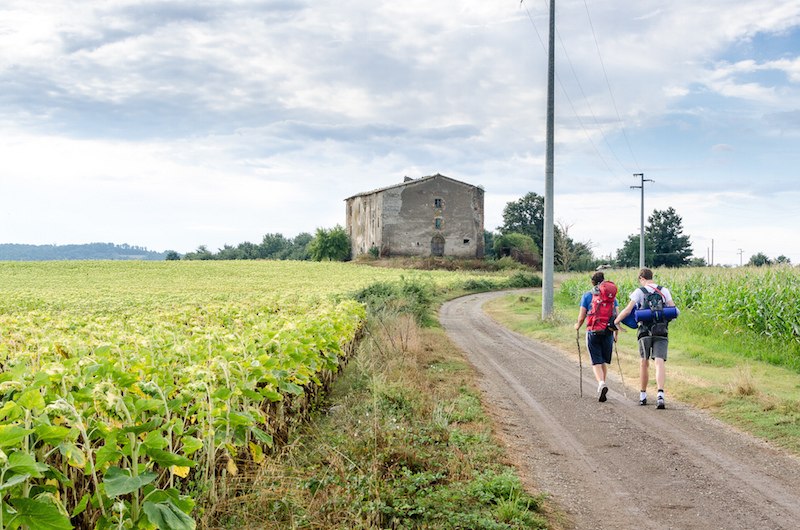 The ancient Via Francigena is a pilgrim route starting as far as Canterbury, in England, and in a sense is the “mother road” for Christian pilgrims in Europe. For centuries, pilgrims from across Europe would trek across the Alps using the famous Saint Bernard Passes on their way to the pilgrim churches of Rome. During the Middle Ages, the Via Francigena continued further south to the port of Bari, home to the remains of Saint Nicholas and departure point for the Holy Land and the Church of the Holy Sepulcher in Jerusalem. While not as popular or well maintained today as the route to Santiago de Compostela in Spain, the Via Francigena can still be traversed through Italy to Rome, on foot for those who want to walk in the footsteps of so many faithful souls before them.

However, a more practical approach may be to combine modern transportation with hiking the better-maintained portions of the original route. The Italian Government has announced plans to promote and refurbish the Via Francigena to bring it up to the level of the pilgrim routes of Santiago de Compostela, Fatima and Lourdes.

Pilgrims traveling on foot will need a detailed map of their route, since the Via Francigena is not well marked in many locations. Accommodations reserved for pilgrims along the way are, today, in short supply, so most pilgrims end up staying in hotels or private hostels. However, there are opportunities to sleep in monasteries and convents so long as there is room available.

A Pilgrim Letter or Pilgrim identity card issued by a priest will usually grant a stay in an Italian monastery or other church facility for at least one night.

Via Francigena: the Route through Italy

The pilgrim route gets its name from the fact it enters Italy from France via the Alpine passes. “Francigena” roughly translates as “the route of the Franks”. The Great and Little Saint Bernard Passes are still used by pilgrims: here you can still find mountain hostels built in the 11th century, famous today for breeding St. Bernard rescue dogs.

When these mountain passes are clear of snow, pilgrims make their way into Val d’Aosta before heading south, towards Rome. However, the route to Rome is not a permanent itinerary, as there are many deviations depending upon the particular shrines a pilgrim would like to visit. The following itinerary along the Via Francigena touches upon major worship locations, but pilgrims-to-be, of course, can select other location beside those listed here. Those healthy and trained enough to walk the entire route, will have a larger selection of shrines, villages, churches and monasteries to visit.

Via Francigena: Aosta to Pavia

The first major stop on the Italian portion of the Via Francigena is the city of Aosta. This is where pilgrims, who just got to Italy through the two St Bernard Passes meet up and begin the Italian leg of their pilgrimage. They often pray in the Aosta Cathedral and the Church of Sant’Orso before heading out of town and head south.

After leaving Aosta, pilgrims head towards the town of Ivrea. The Cathedral of Ivrea is of special interest to pilgrims since it contains the relics of Blessed Thaddeus McCarthy, whose  incorrupt body has possibly performed miracles. From Ivrea, the route leads pilgrims to the ancient towns of Santhià and Vercelli. In Vercelli pilgrims should head to the Romanesque/Gothic Basilica of Sant’Andrea, a former Cistercian abbey with a quiet cloister. The Cathedral of Vercelli is dedicated to Sant’Eusebio, an early bishop whose ancient writings, along with many other priceless documents, are preserved in the Church’s library.

The Via Francigena then heads to the city of Pavia, home to a very old university and some fine churches including a Duomo with the third largest dome in Italy. The basilica of San Michele Maggiore is the most beautiful in Pavia and its crypt contains the tomb of Blessed Martino Salimbene. San Pietro in Ciel d’Oro is of special interest, since it houses the remains of Saint Augustine of Hippo, Father of the Church and Boethius, a late antique Christian philosopher put to death by Theodoric the Goth.

From Pavia, the Via Francigena stops in Emilia Romagna in the city of Piacenza. Pilgrims stop to pray in Santa Maria di Campagna, located in the Piazzale delle Crociate (Crusades Square), site of Pope Urban II’s announcement of the First Crusade in 1095. The Chiesa di Santa Brigida, in Piazza Borgo, and the Basilica di Sant’Antonino, known for its octagonal tower, are also along the Via Francigena.

The Via Francigena follows the ancient Roman Via Emilia to Fidenza, which was once known as Borgo San Donnino. Fidenza Duomo is dedicated to San Donnino, the town’s patron saint, who is said to have picked up his own severed head (similar to Saint Denis), placing it on the future spot of his church.

From Fidenza, the Via Francigena heads south to Fornovo di Taro, where pilgrims can pray at the parish church and rest up before taking the Cisa Pass and cross the Apennines into Tuscany.

Via Francigena: Pontremoli to Lucca

The Cisa Pass, no longer the harrowing trek it once was, leads pilgrims to the city of Pontremoli. The small city has a lot to offer the pilgrim, including accommodations, delicious food and several beautiful churches. Pontremoli’s Baroque Cattedrale di S. Maria Assunta and the Chiesa e Convento della SS. Annunziata are along the Via Francigena route.

Lucca is home to a miraculous relic known as the Volto Santo di Lucca – the Holy Face of Lucca (not to be confused with the Volto Santo – the Veil of Veronica). It is housed in the Duomo di San Martino and it is a crucifix supposedly carved by the disciple Nicodemus. Besides its cathedral, pilgrims in Lucca should also visit the beautiful Pisan style Basilica of San Michele in Foro, before continuing on the Via Francigena.

Via Francigena: Altopascio to Siena

After leaving Lucca, the Via Francigena touches upon small towns in the heart of the Tuscan countryside. Pilgrims pass through Altopascio, with its Chiesa di San Jacopo, and the larger San Miniato with its Duomo and the Santuario del SS. Crocifisso, before reaching San Gimignano. The Collegiata di San Gimignano houses the Cappella di Santa Fina, dedicated to the popular local saint Fina (or Serafina). The Via Francigena then passes through the fortified hill town of Monteriggioni before making its way to Siena.

In Siena, pilgrims head to one of the most beautiful places of prayer along the Via Francigena, the city’s magnificent Duomo, with its characteristic white and dark green marble façade. Siena’s Duomo, whose proper name is Cattedrale di Santa Maria Assunta, houses the venerated image of the Madonna del Voto and relics of Saint John the Baptist, all within an interior virtually dripping with gothic decoration. Siena was also the home of Saint Catherine of Siena and including a pilgrimage to her venerated sites would be a brief, but worthwhile deviation from the direct route to Rome. The Via Francigena passes by the Chiesa di Sant’Agostino, a more peaceful place to pray than the Duomo, before leaving Siena.

Via Francigena: Acquapendente to Viterbo

Before reaching its final leg in Lazio, the Via Francigena passes through the towns of Buonconvento and Radicofani, both with small parish churches. Pilgrims arriving in Acquapendente head to the Cathedral of Santo Sepolcro and its crypt, where an aedicule contains two blood stained fragments of the Column of the Flagellation. The Via Francigena follows the Via Cassia south toward the charming lake town of Bolsena.

Bolsena was the location of one of Christianity’s great miracles in 1263. During a mass held by a visiting priest, the bread of the consecrated host began to bleed, thus authenticating the Catholic doctrine of Transubstantiation. This event helped establish the celebration of Corpus Christi in the Catholic Calendar. Pilgrims can pray and still observe the blood stained stones in the Cappella del Miracolo, part of the Collegiata di Santa Cristina. Although not along the Via Francigena, the miraculous blood stained cloth known as the Corporal of Bolsena is housed nearby in the Orvieto Duomo.

The Via Francigena passes through Montefiascone before leaving the area around Lago di Bolsena for Viterbo. This ancient city was a favorite residence of many Medieval Popes, who built a palace next to the Duomo di San Lorenzo. Viterbo was an important rest stop along the Via Francigena for Medieval pilgrims and is the last large town before reaching Rome. After Viterbo the Via Francigena heads further south along the Via Cassia and through the ancient villages of Sutri and Monterosi before finally reaching Rome on the Via Trionfale.