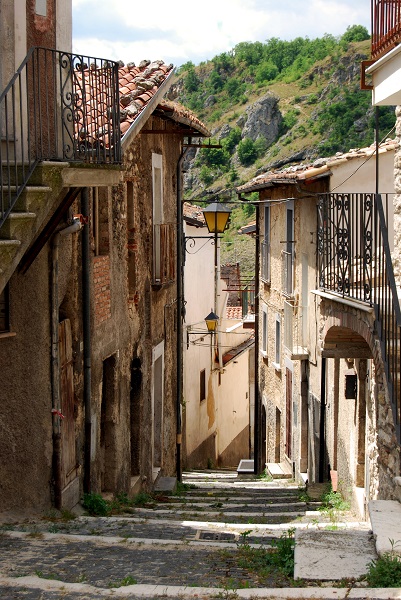 Assergi is a beautiful medieval village 11km from L’Aquila, the capital province of Abruzzo, Italy. It’s quite small (it only has about 500 inhabitants), but it is full of history and very picturesque. It’s a great place where to relax after a day of hiking in the Gran Sasso d’Italia, one of the highest mountains in Italy.

In the 1st century AD, in the area of Assergi was built a village with the purpose to host the workers of a local mine. In the Middle Ages, the little village was expanded and in the 9th century, it was encircled by still existing walls with three gates. These became the only entrance into the town of Assergi, in Abruzzo, Italy.

Assergi is the starting point of excursions to the beautiful Campo Imperatore and the Gran Sasso. There’s a 300 km path that connects the three sides of the Gran Sasso, the longest path in Italy. The area is great for excursions on foot, horse, or bike. So for all cycling, hiking, and trekking lovers, Assergi is a great stop in Abruzzo, Italy!

What to see in Assergi, Italy?

This church was built between the XII and XIII Centuries and it is a great example of Romanesque style. It has been recently renovated. The crypt, an old church, is partially excavated in the rocks.

This place is located about 2 km from the old center of Assergi, Italy. Fonte Cerreto is the departing point of the Gran Sasso Funicular, which is one of the longest in Europe.

The most important event in Assergi is the celebration of the Assunta on August 15 (ferragosto). Ferragosto is a bank holiday in all of Italy, celebrated with family and friends. This day usually involves town markets, concerts, food, and a lot of fun.

How to get to Assergi in Abruzzo, Italy?

The closest airports are Fiumicino Airport in Rome and Abruzzo International Airport in Pescara. There’s a bus service that connects Assergi to L’Aquila, Rome, Giulianova and Pescara.

By car, you need to take the A24 that connects Rome to Teramo.

Being a small village, there aren’t many options for staying in Assergi. We do recommend the Hotel Nido dell’Aquila and the Albergo di Campo Imperatore, where Benito Mussolini (the Duce) was incarcerated for a couple of weeks in 1943 before he was freed by the German Army.

My family lives in this awesome place