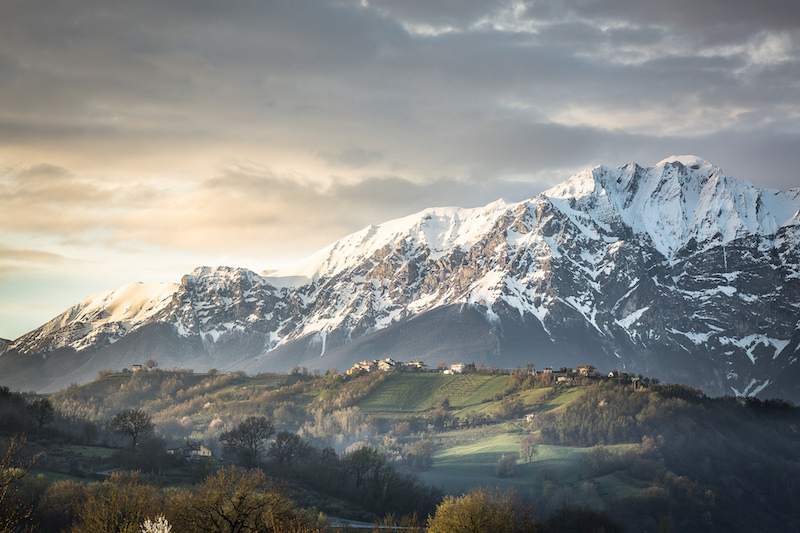 Spread over an area of 150,000 hectares this Italian national park, in the province of L’Aquila, is dominated by the Gran Sasso, a massif that towers over the surrounding area. Gran Sasso e Monti della Laga Park is located between the Mediterranean and the Euro-Siberian regions and is one of the largest parks in Italy, with numerous activities and tours to keep visitors busy year round. The park also has a diverse array of flora and fauna as well as many areas of architectural and historical interest. The region also boasts much natural beauty including the Calderone glacier and several high peaks of Apennine Mountains, such as the Corno Grande (“Big Horn”), which measures in at 2,912 meters.

In January 2017 the Gran Sasso hit the covers of newspapers all over the world because of a terrible accident: the heavy snow and continuous earthquakes caused an avalanche that covered a hotel where 34 people were staying. More info here:  http://www.lifeinitaly.com/news/avalanche-earthquake-abruzzo .

There are more than 2,000 different plant species in the national park, which boasts rich vegetation due to the high altitude of the mountain areas and the various geological landscapes that are present in the territory.

The highest peaks in the region are home to some of the most important flowers including the Adonide ricurva, the wormwood and the violet of the Majella. Some species, such as the Apennine edelweiss, are unique to the park. The lower portions of the park have woods filled with oaks and chestnuts planted by the Romans as well as Yews, Ash trees and Elms. The fields also boast several interesting species such as Androsace maxima, Ceratocefala and Falcaria vulgaris.

Visitors who are interested in the park’s wildlife will be interested to know that the Abruzzo chamois can be found in the area, an animal that is unique to the Apennine region. You also have a good chance or spotting a roe or red deer or an Apennine wolf. Other mammals like porcupines, polecats, beech martens, badgers, wild cats and martens can also be found in the area along with some very rare bird specimens and amphibians like earth newts and salamanders.

Amatrice is a perfect place to begin you exploration of the park. Important for its historical significance the town also houses art that dates back to the 13th century. From Amatrice you can depart for hikes along the Laga Reatina, green pastures and the Tronto River Springs. If you head to Accumoli you will get a glimpse of a panoramic vista dominated by a tower that dates back to the 13th century. Continuing on in your exploration of Lazio you can visit Illica and Poggio d’Api, where you can hike across greenlands and through woods to get to Secco and Selva Lakes.

If you are visiting the park you may also want to stop in the quaint villages of Trisungo and Spelonga as well as Arquata del Tronto, the medieval town that houses the imposing Castle of the Rocca. If you head down Salaria Road you will reach Acquasanta Terme, a spa that is the jumping off point for hikes to Umito and the Volpara Waterfalls.

More medieval buildings can be found in Campli, along with the Archaeological Museum, which holds the excavation finds taken from the Necropolis of Campovalano. The artifacts date back to between the 7th and 5th centuries BC. Another great museum, this time historical, is located in the town of Civitella del Tronto, which also has a 10th century fortress that draws many visitors. Additional interesting archeological and historical sites can be found at Castel Manfrino and various heritages in the area. If you would like to see gorges then head to Ripe where the Gorges of Salinello can be observed.

Around the Laga Mountains you will find Valle Castellana. From this area you can depart on several different walking tours, which take you through abandoned medieval villages, woods and meadows. Several great waterfalls can also be seen on these hikes. A hike I would suggest will take you from Ceppo to the breathtaking Morricana Waterfall and the famous Martese Wood (be sure to spot its Silver Fir). You can continue on into the Langammella and Cagliera woods until you happen upon several streams and waterfalls and then continue on to Padula di Cortino where you can observe houses built in typical Laga sandstone. You may also want to stop in the villages of Torricella Sicura and Rocca Santa Maria.

Another village with unique homes, in this case stone, is Pietracamela, a village filled with narrow, winding streets. The Abruzzo chamois live nearby and you can catch a picturesque walking trail that will take you along the Rio Arno until it reaches a spectacular waterfall. If you would like to see Corno Grande, Corno Piccolo, Pizzo d’Intermesoli and other Gran Sasso peaks then it is best to head off from Prati di Tivo.

Another nice journey is from Montorio to Vomano. From here you can choose from a variety of different hikes that take you to places like Piano Vomano, Fano Adrano (see the “Prato Selva”), Ortolano and the “Cento Fonti” of Cesacastina among others.