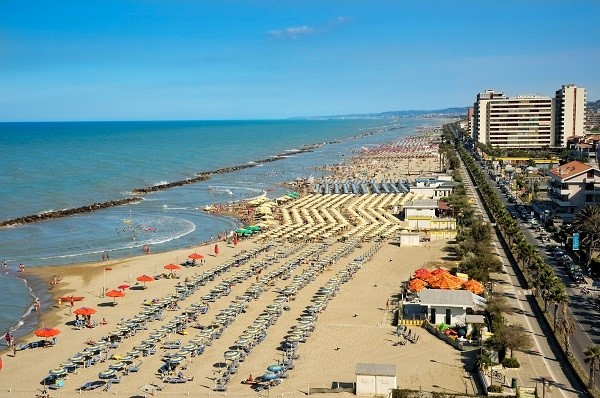 If you woke up a bit early today, try something a little different. A destination in Italy that’s considered a hiddem gem. Visit Pescara in Abruzzo, Italy.

As another gorgeous Italian day awaits, you set up shop for a look at the magnificent scene that is about to unfold. The scene has repeated itself over and over again for centuries, yet the scenery always somehow changes. From majestic glows of yellow and orange, to hints of azure blue and bright reds, the main characters of this daily performance come alive each day as if it were the opening night. This is Pescara, in the region of Abruzzo, Italy.

Slowly, the curtain starts to rise. From complete darkness, the theatre has been slowly lit, with hints of gray shadows and black silhouettes. Inching along, the stage comes nearly set, as the house is now filling with bright. The brilliant rays of light enter, until the entire horizon, is engulfed in yellow and white. The sun shimmers up out of the water of the Adriatic sea to signal another gorgeous Italian day in the beautiful coastal town of Pescara, Italy.

Where is Pescara in Italy?

Pescara, located along the Adriatic coast of Italy, sits in a beautiful spot on the country’s eastern seaboard. Many who come to Italy speak glowingly of the beauty of the Amalfi coast, the history of Rome, the culture of Florence, and the uniqueness of Venice.

However, not much is said of the beautiful eastern coastline of this ancient country. Pescara is one of the largest cities along this stretch of coast.  The city is located in the region of Abruzzo, Italy. Pescara is the main character in this Adriatic sea’s coastal performance.

The Adriatic shore has a great supporting cast, as well, as many towns aligning that are worth visiting in Italy.

Take a trip farther down the coast from Pescara and you will find those towns that make Abruzzo a hidden gem for many.  Francavilla al Mare, Ortona, S. Vito Chietino, and Vasto have many charms that you would typically associate with coastal villages.

Even though Pescara and the many coastal towns surrounding it are not on the tip of many tourists’ tongues when planning their Italian trips, they do have a following. The area swells in the summer months, especially in the vacation month of August.

Many from northern Italian regions, as well as those from Switzerland, Austria, and some as far away as Germany, have found these areas to be quite the ideal holiday destination in Italy.

The temperate sea climate, small village shopping, and local nightlife make Pescara and its surrounding areas a magnet for those in search of peace, beauty, and fun for their vacation.  A magic spell is placed on these tourists that keep them coming year after year.

Many come to explore the natural wonders of Pescara and its cousins. If you look in one direction, you are captivated by the beautiful views of the Apennines mountains that stretch down this way from the northern part of the country. Called the backbone of Italy by some, this mountain range presents a beautiful backdrop to the sea. When you head to explore them, make sure you turn your head back around and take in the mesmerizing view of the Adriatic.

Pescara tourist information: How to arrive to Pescara?

Pescara, with about 200,000 residents, is the largest city in the Abruzzo region. It’s also one of the main business and tourist centers along the east coast.  It is easily accessible by rail, car, and air. Also, near the town of Pescara, the Abruzzo International Airport welcomes passengers from all over the world.

Being a larger city, Pescara boasts a thriving industrial and business district, which took off as the Marshall Plan was taking full effect in the years after World War II.

Like many of the places devastated by the war, the turnaround was not immediate. Post-war reconstruction did not happen overnight.  In fact, it was not until the early sixties that the region’s development started to spiral upward.

Springing up out of this growth were some of the other neighboring towns like Francavilla, Spoltore, Citta Sant’Angelo, and Montesilvano.  This build-up has been so strong, that the area now houses about one-third of the population of the entire region of Abruzzo.

The city is looked after by its patron Saint Cetteo, a bishop of the area in the 6th Century AD. Persecuted by the Lombards, his relics were moved from Chieti to their rightful place in Pescara in the late 1970s.

Over the years, the city has reflected many other parts of the country, in that it had been conquered by many peoples, from the Barbarian invasions, Byzantine domination, Lombards, and the Normans until it united with Italy as a country in 1861.  From there, Pescara became the provincial capital in 1927.

Where to eat in Pescara, Italy?

Pescara is full of beautiful restaurants and trattorie serving the freshest seafood made from original recipes of maritime lore. There is nothing like sitting down to be enraptured by the wonderfully prepared dishes of the area overlooking some of the most breathtaking scenery in the country.

Fresh off of a walk along the beach or a trip into the mountains, the enjoyment of a meal made in expert Abruzzese fashion is truly a great reward. So if you’re looking for where to eat in Pescara, head for the traditional places!

Looking for something to satisfy your palate after an evening stroll under the stars?  Don’t forget the cannoli or the ice cream (gelato). Pescara is filled with many traditional ice cream shops right along the seafront.  That is all part of experiencing the culture of Abruzzo, Italy, right?

In Pescara, there are plenty of accommodation options. Here are our recommendations:

If you prefer to relax in the hills near Pescara, try the Agriturismo Le Cicale, Contrada Vallemonte 12. Ph. +39 339 2757650. Email: info@agriturismolecicale.com.

As you look to explore locales around Pescara, you cannot escape its almost 20 km of beach, which stretches from Francavilla to Montesilvano. The greens and blues of the sea capture your imagination as you think of that sunset you saw in the morning. But now the umbrellas are out, and you are enjoying both the soothing sounds of the waves and the fresh air of the Adriatic. Pescara is truly a gem in Abruzzo!