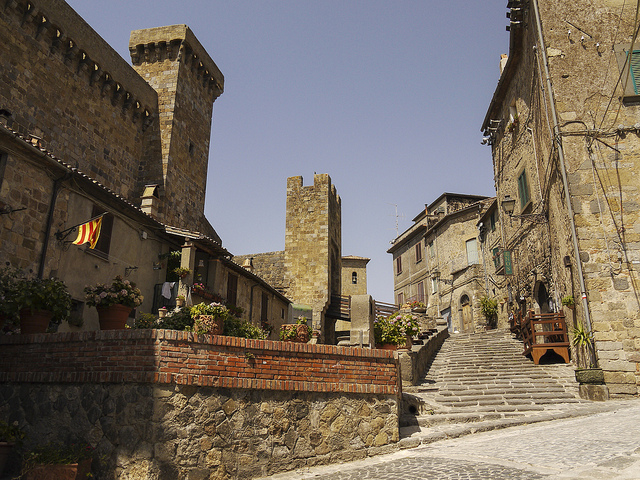 In Activities in Small Town I we explored the world of Italian sagre and food fairs, a great alternative to spend fun and interesting Summer evenings while holidaying in Italy.

In this second part of our trip through traditional and authentic Italian Summer activities, we’ll take a closer look at other types of events perfect to liven up your Italian stay.

Traditional religious celebrations are particularly important for smaller Italian communities: they are usually rooted in local history and are an occasion for towns and villages to gather and celebrate. Even if you’re not a practicing Catholic, these events can be of great interest: they’re lively, colorful and usually involve markets, fairs and music.

Sooner or later, visitors to small towns are likely to stumble on a religious procession complete with priests, nuns, and local devotees carrying crosses and other religious symbols, often accompanied by the town’s brass band, or by hymns sung by the marchers.

These festivities can be of two kinds: those celebrated all over the country – such as the Corpus Domini, taking place on the Sunday after Pentecost, and the Day of the Assumption of Mary, held on the 15th of August – or those strictly associated to a specific place, such as festivities for a patron saint. In both cases, villages and town tend to organize plenty of events, usually culminating into the proper religious celebration.

For example, every year Bolsena celebrates its Corpus Domini Infiorata, in memory of the miracle that took place in Bolsena in 1263, when a Bohemian priest, traveling to Rome to resolve his doubts over the doctrine of transubstantiation, celebrated mass at the church of Santa Cristina and the communion turned into flesh and blood. In the Infiorata, villagers take petals of the flowers of many plants such as Bolsena’s main flower – the hydrangea – and create beautiful and complicated mosaics of religious and other scenes on the main street of the town. Read more about charming Bolsena.

Bolsena also pays omage to its patron Saint, Santa Cristina, by hosting not one, but two, staged “Mysteries of Santa Cristina.” In these staged tableaux, villagers depict the various tortures that Santa Cristina underwent during the persecutions of Christians under Roman Emperor Diocletian, including flagellation, cutting out her tongue, death by arrows and more. Lest the reader be horrified, let me reassure you that the tableaus are actually beautiful if somewhat gruesome to behold, resembling in composition Renaissance paintings of the same. It should also reassure that Santa Cristina was saved by God to some extent from all of her tortures, except the arrows, which resulted in her death.

So why does Bolsena host two such Mysteries every summer? Well, the first is staged by adults while the second is staged by children!

Wherever you go in Italy during the Summer, you’re bound to find music. From “Ballo Liscio” – ballroom dancing – to Italian line dancing and rock concert, you’ll find something to dance at. If you do not know how to dance the Hully Gully or the Tiburon, do not panic. Local experts abound to show you the moves. Hopefully, you like the accordion, which has made a huge comeback in small towns. Of course, there are also favorites from other countries, and dances do not seem to be complete without an Italian rendition of YMCA. Watch out, however, as the Italian moves for YMCA are not the same as those in North America!

Italians love music and most towns host at least an occasional concert or dance in the main piazza. For towns that rely more heavily on tourism, concerts and musical events are a more stable fixture throughout the season: the best way to get to know what’s happening is to check out the official websites of the town you’re planning to stay and see what’s up. You could also check the provincia‘s website, to get a wider selection of events, but always close to the area you’re planning to visit.

A good thing about Summer music events in Italy is that they encompass all types of music: from jazz to rock, from traditional to classical, you’ll find plenty to keep you entertained. If you’re a classical music lover, you may keep an eye on events organized by local parishes, as they usually have polyphonic choirs which perform also in concerts open to the public, often for free.

It’s true that, usually, theatre performances and opera are a thing of cities, but it’s not always so.

Actually, one of the most important opera festivals in the world, Il Festival Pucciniano, runs throughout the Summer in Torre del Lago, a small town of about 11 thousand near Viareggio, on the shores of Lake Massaciuccoli, where Puccini lived for many years and where he composed some of his most memorable works. To honor its most notorious citizen, Torre del Lago has been organizing this two months long festival since 1930. Performances, held in the outdoor Teatro dei Quattromila, are rigourously Puccini’s operas. In and around the festival, plenty of cultural events have developed: you can visit Puccini’s home and its museum, or enjoy one of the many exhibitions organized throughout the Summer. You can find details about them on the Festival website we linked for you above.

The market is still a strong tradition in Italy, so it’s right to include it here, even though it doesn’t usually take place in the evening.

On market day, vendors from all over the area fill the streets with their stalls: from clothes to accessories, from local produce to ready to eat foods, you’ll find anything and everything at a traditional Italian market. When it comes to food, markets are known for providing fresh, local produce and products and tend to be cheaper than shops. Clothing is also usually much cheaper than in stores, even though you need to pay attention to quality: some stalls have better stuff than others!

Local markets take place in different days of the week, depending on where you are, so you may like to ask locals about it once you’re here. They’re great fun and an amazing way to learn about traditions and habits of the area you’re visiting. Remember that they’re usually held only in the morning: they tend to start as early as 7 or 8 am and end around 1pm. If you plan to attend one, keep the morning free to do just that: there’s nothing like having the right amount of time to cruise through a nice market!

Where do I find out about these events?

Since small towns don’t have a weekly publication like “Roma C’È” it’s necessary to do some spade work. Posters around town are an obvious resource, as most main events are usually advertised all over the town holding them, as well as neighbouring areas. Keeping up with events is as simple looking out for the most recent posters. Watch out for little ones posted in places like your favorite gelateria.

Word of mouth is another great way to know about what’s going on: just ask your local barista, or the people at the B+B or hotel where you stay, they’re probably up to date with all that happens in the area.

Another source is the local information center, if your town is big enough to have one. Information centers usually contain brochures of concert series, opera festivals and other events, as well as useful information on guided tours and the like. I usually collect a pile of these brochures from my town and neighboring towns and consult them when we are picking a place to go.

Last but not certainly least, you’ve got the web: nowadays, even the smaller communities have a website, where they list useful information for citizens and tourists alike, including special events. If events are big enough, there’s a great chance they’ve their own website, too.

As you see, there are plenty of options for all those among you who’d like to skip the crowds of large cities and touristy locations in name of a quieter, more relax holiday in lesser known Italy. A bit as everywhere else in the world, smaller towns and  country villages are probably where you’ll be able to find the “real Italy,” an Italy made of traditions, smaller crowds and less pretentiousness, possibly the best place to truly relax during your vacation.

by KCG and Francesca Bezzone