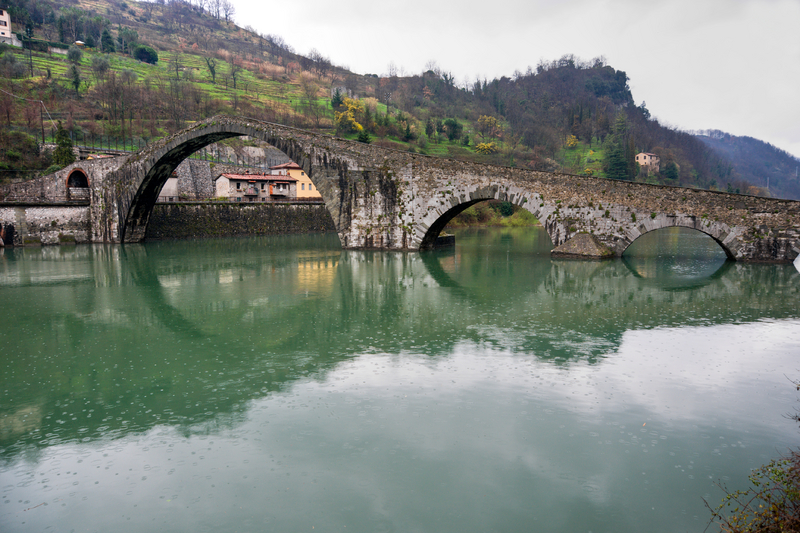 Bagni di Lucca: the name of the town has been so since 1862. Before then the town was called Bagno a Corsena, the name by which it had been known since the Roman times. The Countess Matilda of Tuscany in 1101 had the Devil’s bridge built in town so that she could easily reach the thermal springs located in nearby. Emperor Frederick II in 1245 visited the thermal springs along with all of the courts.

The thermal springs in Bagno di Lucca for centuries served as one of the best European resorts and the town was given the name of “Italian Switzerland”. Several well known personalities like Michel de Montaigne, Vittorio Alfieri, Ippolito d’Este, Paolina Borghese, Matternich, Field Marshall Radestskly, Montesquieu, Toscanini, Montale, Shelley, Byron, and Ferdinand II of Tuscany had all at one point been to Bagni di Lucca to enjoy the health benefits of the thermal waters.

Today, more than anything Bagni di Lucca is a well known spa town and a very famous tourist location which is located in the valley of Lima River nestled at the foot of the Apennines Hills between Emilia and Tuscany. Although the altitude at which the town lies is just around 500 feet above sea level, its surroundings give it an appearance of being a mountain resort. There are three major centers in Bagni di Lucca which consist of Fornoli, Ponte a Serraglia and Villa along with several small hamlets and villages which make up the entire area of Bagni di Lucca.

Since the Roman and even during the Etruscan times, Bagni di Lucca has been known for its thermal springs. The area was first mentioned in an ancient document dating back to 983. Around the 10th century, the town became a part of the feudal property and it had at one point belonged to Suffredinghi family, then to Porcareschi and later on to Lupari families. During the 12th century, Lucca was a part of Bagni di Lucca.

In the 14th century, Lucca received plenty of profits from the thermal springs in the region. Bagni di Lucca was then transformed and restored to make it an enjoyable and a relaxing oasis in order to attract tourists from all over the country and the world.

The thermal springs of Bagni di Lucca reached their peak during the 19th century during the time of French occupation in the region. The town then became a favorite residence of Napoleon and his court along with Elisa Baciocchi, Napoleon’s sister, in the summer months. A casino was also built in town during that time to offer entertainment options to the tourists.

Later on in 1814 Bagni di Lucca was handed over to Grand Duchy of Tuscany during the rule of Leopold II from Lorraine. During this time the tourism based on thermal springs declined greatly and the casino was closed. However, during the later years the town has been newly restored and has opened its doors to tourists again; since then there has been no looking back for Bagni di Lucca.

The Thermal Baths and Spa

More than anything else, Bagni di Lucca is known for its thermal baths and springs. The springs of the hills of Corsena are rich in sulphate bicarbonate calcium and have quite a hot temperature. The spa in town uses the waters from 25 different springs in the region. The waters of these springs have been used for treating various kinds of diseases since ancient times. The thermal baths also attracted the attention of several geologists and chemists over the last century.

The healing properties of the waters were known to people since Roman times. However, it was only in 1921 that officially a spa was opened up in Bagni di Lucca in order to take the benefits of the waters of the springs in the region. Bagni di Lucca is known to be one of the oldest health resorts in Europe. The resort was famous since the Renaissance times and has been often visited by travelers from all over Europe.

During the rule of Elisa Baciocchi, Napoleon’s sister, the town received a great boost for its thermal springs. The tourism in the area developed around 1817 and plenty of hotels were built in the area to promote the place to the British colony residents which included well known names like Shelley and Byron.

The entire complex is based on 19 different springs which contain salts of calcium and sulphur and are naturally hot. The establishments of Casa Boccella and Jean Varraud in Bagni di Lucca offer several different spa treatments which are known for their therapeutic effects. The spas offer treatments like inhalation treatment, mud treatments and plunge baths.

These waters are especially known to treat ailments of gynaecological nature, rheumatic, respiratory and skin diseases. The waters of Bernabo baths are high in radioactive elements and low in salts and are known for treatment of skin ailments. Other than the spas in the region there are three different thermal water swimming pools which have been established in Villa Ada’s gardens which are open throughout the summer months.

Those who prefer travelling by train can take a train from Florence or Pisa to Lucca and then take the railway line that goes to Aulla. There is a station at Bagni di Lucca Terme where majority of the trains stop for a while.

I am looking for some of the natural spring locations in bagni di lucca, but am having a hard time finding anything but the one that is indoors.
Is there a list somewhere of some of the outdoor natural springs in this area?