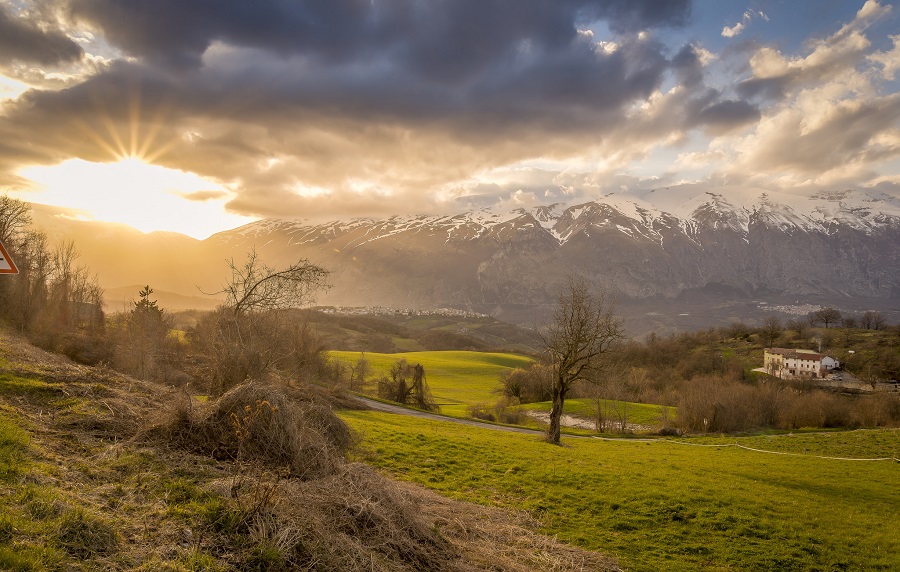 One of the most visited sites in Italy and particularly appreciated by tourists, the Cinque Terre National Park, is in the Liguria region and it is listed in the UNESCO environmental and cultural worldwide patrimony, which has to be guarded and improved.

The name literally translates into “the Five Lands” and it has been a protected area since 1999; the park consists of three cities, Monterosso al Mare, Vernazza, and Riomaggiore, and it is divided into a marine and land section.

The main characteristic of this protected territory is that, rather than preserving a treasury of natural resources, it aims at preserving human constructions and their relationship with the surrounding environment. A perfect example of this are the dry stone walls of the houses that perfectly match the mountains diving into the sea right on the coast, a typical scenario in Liguria.

High cliffs are indeed a common characteristic throughout the region and this creates natural caves and small beaches that are simply breathtaking. This environment is particularly friendly to sea mammals and especially dolphins, which are otherwise uncommon along the Italian coastline. Beside the beauty of the landscape, the area is known also for its local wines, food and craftworks.

Coastlines hanging over the sea, coves and small beaches, thousands of kilometres of dry built walls bordering terraces on which grapevines are grown, medieval boroughs, shrines and panoramic promenades on the sea and hillsides: this is all to be enjoyed in the Parco Nazionale delle Cinque Terre.

This park is in northern Puglia and comprises of Mount Gargano promontory, the Tremiti Islands and the Foresta Umbra; it is one of the largest protected areas of Italy. Of a calcareous nature, it is characterised by typically karstic features, such as caves and sinkholes. Originally, the promontory was covered with forests, now, unfortunately, it has 15% less. One very interesting site in this park is the Dolina Pozzantina, a karst depression (a geological phenomenon) with a diameter of 500 meters (the biggest in all of Europe). It is the largest dolina among the 4000 present in the park. The park is also home to 128 marine caves. This makes Gargano very unusual as all of the water supply comes from underground and there are no surface rivers.

Though there are no rivers, there are two beautiful lagoons,  Lake Lesina and Lake Varano. This rich underground water source and very particular climatic conditions have enouraged the growth of the Foresta Umbra, which holds a total 2,200 different plants, making up 35% of the entire Italian flora; it also created wetlands, not very commonly seen in Italy. In terms of wild animals, it is particularly important to mention that there are approximately 170 different species of birds here.

The popular San Giovanni Rotondo (place of pilgrimage and worship for Saint Padre Pio that attracts millions of religious visitors every year), and Vieste are located in this area. It is possible to visit the park with guided tours, and several itineraries have been designed to tailor the visits according to particular interests of the visitors.

Located in Sardinia, in one of the wildest and most picturesque areas on the island,  the Gennargentu mountain group  withdraws towards east and south of the Flumenosa river valley, while the part known as the Supramonte is a vast area covered with ancient forests, deep gorges, and an incredible amount of caves.

Finally the coast of Orosei, with its mountainsides diving directly into the sea, completes the breathtaking array of landscapes within the park.  Being a very isolated place, it has a great variety of indigenous species and sub-species as the Papilio Hospiton, a gorgeous, protected, butterfly. Many indigenous reptiles are also present in the Corsica Island and in the Tuscan Archipelago.
We can also find moufflons, the Sardinian deer, wildcats and foxes, dormice and various other species. Many birds are also present: the griffon hawk, the queen’s hawk, the royal eagle, the Sardinian goshawk, the sparrow hawk and the buzzard.

The flora is very rich, too, with centennial hollies and local species as the Euphrasia Genargetea and the Ribes Sardum. These species are only present in this area of the world.

Located between the Val d’ Aosta and Piedmont regions, it was the first Italian national park created (1922). It sits on 70,318 hectares of high mountainous terrain ranging from the 800 meters of the valleys to the 4,061 meters of the Gran Paradiso peak, making it the highest park in Europe. Pine trees and larch woods, vast alpine prairies, rocks and glaciers are the right scenario for a various and rich fauna and flora life. Those in the Gran Paradiso park are among the most enchanted panoramas Italy can offer.  The name comes from the Gran Paradiso mountain and it originally served as a royal hunting reserve for the Savoia. It is very easy to access the park from Italy, Switzerland and France, and it is very well organized to handle tourists.

Located in the Abruzzo Region, the park has 150,000 hectares of extension, making it one of the largest of Italy. It is various and rich in nature and runs between three mountain groups: Gran Sasso – the highest peak of the Apennines, rises 2,912 meters above sea level – Massiccio della Laga and the Monti Gemelli. This mountain chain is the only one with a glacier in the entire Apennines, known as the ‘Calderone’.

This happens to be one of the largest European protected zones and its main element is clearly the massif. This is famous for its rock, great for trekking and climbing, though technically difficult as ice and snow are always present, even during the summer months, and the wind can reach very high speeds. Of course the park is also very interesting from a biological standpoint, including some exclusive species among the over 200 hundred recorded. The fauna is similar to that found in the National Park of Abruzzo. For those who enjoy horseback riding the park offers long trails and there are place to hire horses.

Also in the Abruzzo Region, the mountain of the Majella was named by the Latin writer Pliny the Elder, known as the ‘father of the mountains’. High, massive and wild, this mountain group is part of the World Patrimony of National Parks. It is composed by four main mountaineous groups: the Majella, the Porrara, the Morrone and the Pizzi Mountains, all with its valleys and karstic plains. It’s a national park which, because of its geographical position, size, prominence, and its changing climate, is the only one in its kind. It encloses wide lands, with its peculiar wildlife and its biodiversity of European and worldwide importance.

Established in 1991, it basically surrounds the massif of Majella whose highest peak is Mount Amaro, 2,793 meters tall. There are 2,100 plants and 150 species of animals, representing pretty much one third of the entire Italian flora. The park also features several museums that can be visited all year long, which provide an understanding of the natural evolution of the area; the botanical gardens within the park contain hundreds of different types of flowers and plants. In the park however, besides the natural elements, it is possible to find some typical products of the local economy handmade by local artisans. There is a strong tradition of metal molding, as well as ceramics, along with the particular arts of tailoring, wood and stonework. There is really a bit of everything, proving the many capabilities of the “Abruzzesi”. Last but not least we should mention the food, as the area has great cheeses, olive oil, and mushrooms that are second to none.

Its the largest protected area in the country. It sits between the mountain peaks of Dolcedorme and Cozzo del Pellegrino – on the mountain chains of Calabria and Basilicata, overlooking the Tyrrhenian and Jonian seas.

Within it lays one of the most evocative and wild areas of Calabria, with vast and beautiful forests stretching out on the Pollino Park and  the Aspromonte. It includes vast areas on the Jonian and Tyrrhenian seas where the Eolie Islands can be seen in the distance.