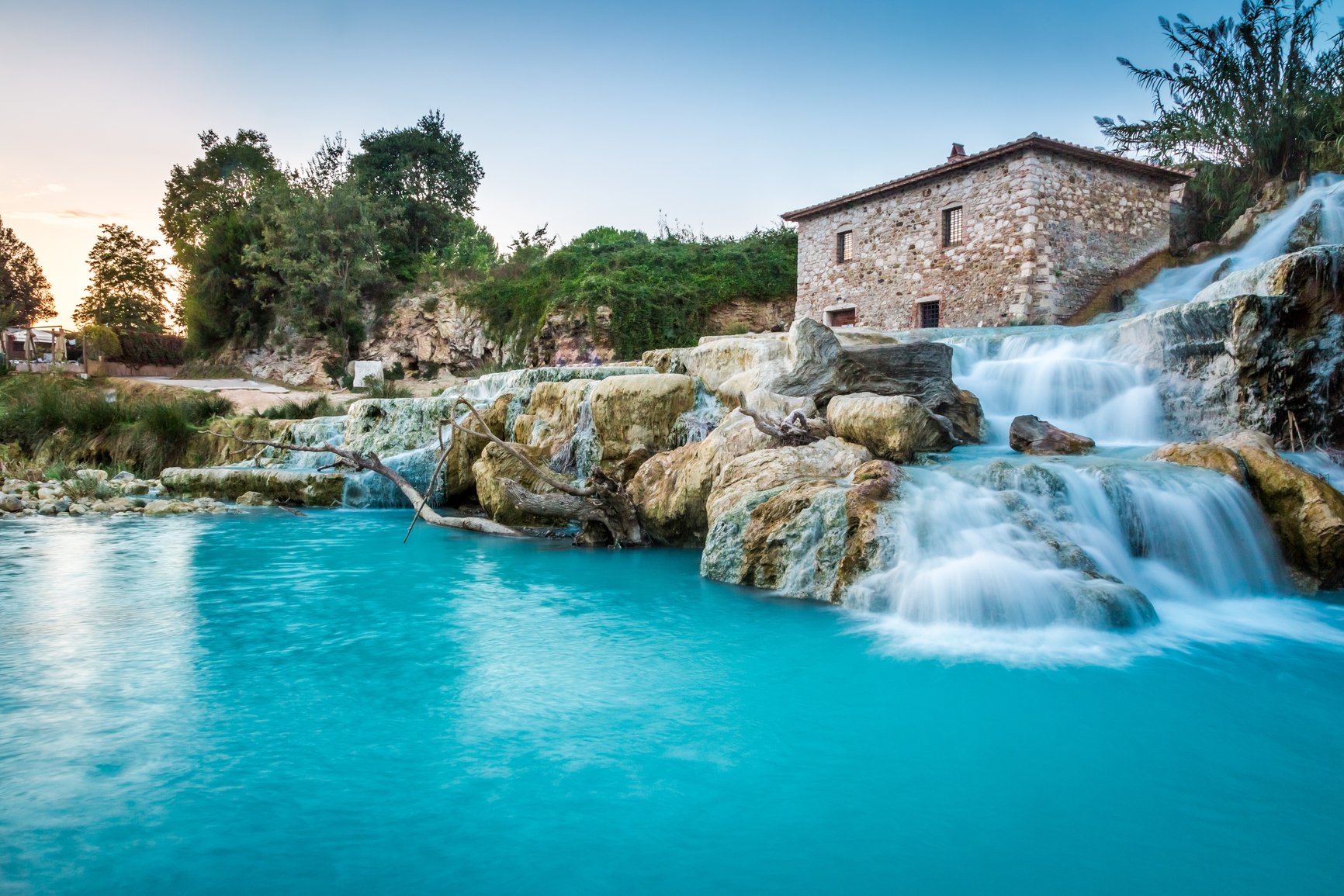 Saturnia is an ancient village in the south of Tuscany in the area known as Maremma. Although not yet commercialized, it attracts tourists because of its thermal baths which have been of considerable importance since ancient ages. The village is a little out of the way for most tourists but it does have a few good facilities for travelers. There are a handful of good hotels and Bed & Breakfasts and a few good restaurants and plenty of gelaterias and cafes located around the village.

Saturnia has been quite an important location since ancient ages. There is a large Etruscan gateway to the village which is still in good shape. The gate has a jigsaw pattern and an irregular shape made with large stones which have withstood the test of time for more than two thousand years. Via Clodia, the Roman road, passed through this gate and was an important road during the Roman times. Centuries ago, the village population was destroyed by malaria.

History of the Thermal Baths

The thermal baths in Saturnia have been around for centuries, as is proved by Etruscan remains found in the area. The baths were famous with the Romans who realized their health benefits. The Romans built a resting station in the village along Via Clodia mainly because of the thermal baths. During the Middle Ages, Saturnia faced a number of challenges and its importance gradually declined. In the 18th century, Giorgio Santi mentioned Saturnia as a deserted and ruined town. Although the waters of the thermal baths had been used since ancient ages for treatment of rare diseases in animals and men alike, the town was deserted after it was struck by malaria.

People from all over the surrounding regions had once travelled to the thermal baths to immerse themselves in the healing waters of the thermal baths to cure themselves of skin diseases. The mud deposited in the basin was (and still is) rich in sulphur. The locals gathered, dried and sold the sulphur mud in round lumps to the visitors for money and especially to shepherds who would then use the mud on their sheep when they faced diseases. Today visitors to the baths coat their bodies in the mud making designs over their skins as they lounge around the springs.

Saturnia is a charming village dating back to medieval times which has still managed to maintain its medieval nature. The hills surrounding the village are covered in dense woods and olive grooves with plenty of Etruscan remains. The village is located an hour away from Siena, an hour and half from the city of Rome and quite close to the sea.

In the recent years the village has gained quite a reputation for its excellent thermal baths, its hot water spring and its good traditional restaurants. A hot water spa known for its therapeutic qualities lies at the foot of the hill near Saturnia.

The Albegna River passes from the countryside surrounding Saturnia. Monte Argentario and the Mounts of Uccellina nature park are also located close to the village. The towns of Pitigliano, Sorano and Sovana are situated quite close to Saturnia and the port of Santo Stefano connects to the Giannutri and Giglio islands by a ferry. Porto Ercole and Ansedonia are also easily accessible from Saturnia.

Terme di Saturnia is a large spa in Saturnia which provides a number of therapeutic treatments to visitors. As mentioned above, the waters that flows in the spa are rich in sulphur and are believed to have health benefits. The spa offers treatments for several types of digestive system ailments like constipation, obesity and gastric problems. It treats diseases of throat and nose and arthritis in several forms.

Hundreds of tourists swim in this hot water river to avail the many health benefits of the water. It is a good spot for sun bathing or even for an afternoon picnic in the outdoors (provided it is not too crowded). Going further on the road, a left turn will lead you to the hot spring waterfall which is picturesque. There is a large parking area close to the waterfall for those who are driving down to the area. The waterfall and river are also great for those who just want to enjoy a day outdoor.  While the waterfall can be crowded, if you want to enjoy the water but not the crowds, bear right at the entrance and enter the river through a small free campground. The river is shallow and narrow but still warm, suphureous and an interesting shade of white-blue.

There aren’t any changing rooms in the area so visitors have to change in their cars. The thermal springs and the waterfall are both very popular with the locals as well as tourists so the place might get quite crowded on weekends. It is best to visit the place on weekdays and in off season to avoid the tourist rush.

Because of the newly developed facilities in Saturnia for tourists there are now plenty of visitors who travel to Saturnia to take a dip in the thermal pools.

How to get to Saturnia Thermal Baths

The closest airport is Fiumicino in Rome (150 km). By car, from Rome you need to take the motorway A11 and exit in Civitavecchia. From there take the Aurelia SS11 to Montalto di Castro; when you’ve passed Montalto, take the Vulci exit and drive towards Manciano and Saturnia (it’s about 180km, 2 hours drive from Rome). From Florence go towards Siena and from there take the SS223 to Grosseto. Once in Grosseto follow Scansano, Montemerano, Saturnia.

Getting to Saturnia Thermal Baths is not very easy via public transport, but it’s not impossible. The closest train station is Albinia, but not many trains stop there, so it’s better to stop in Orbetello (it’s about 2 hrs from Rome and 20 minutes from Grosseto, check www.trenitalia.com). From Orbetello you need to get a first bus to Manciano (lines 11-PR or from Grosseto via Albinia 41-PR); from Manciano there’s a second bus (line 17-PR); the Thermal Baths are before the town of Saturnia, so ask the driver to drop you off there. On the way back, bus to Manciano 17-PA and then to Orbetello 11-PA or Albinia-Grosseto 41-PA. Please note that many of these services are “feriale”, which means that they run Monday to Saturday, excluded national holidays. There is only one bus from Manciano to Saturnia, so you will need to spend one or two nights in Saturnia (in town or at the nearby resort).

Hi Saturnia public Spring are open and free to the public anytime. There are also private springs which offer better amenities and swimming pools. I would check on the private springs website about their schedule Paolo

We will be staying in Rome on the 28th-31st Of August 2020 and we would love to come & spend the day in the hot springs. How do we go about booking?