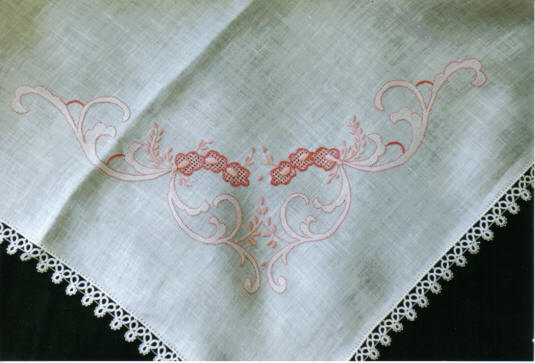 School of Embroidery in Bolsena

Founded in 1995, after the first exhibition of “PIZZI A PALAZZO” (Lace at the Palace) held in Bolsena between 10th and 17th August that year, the “Bolsena Embroidery School ” has many years of experience during which time it has seen an increasing enthusiasm and fervor both in the commitment of its teachers and the curiosity and interest shown by young and old alike in regard to this almost forgotten art form.

“Rakam” magazine, edited by the Rusconi Group in Milan, has given a lot of publishing space to the work done by the school and has printed articles both in its monthly edition and in “Rakam Collezione”.

Since it was first established, the “Bolsena Embroidery School“ has held courses in this art form; not only courses of the old traditional embroidery in white, but also courses in unthreading, colored embroidery and tapestry. In the art of lace-making courses in classical crochet as well as “chiacchierino”, and “modano” and “tombolo” thread, have enjoyed a great success finding enthusiast in and skilled students who have succeeded in attaining an exceptionally high level of ability.

Particular interest has been shown in the Orvietan lace-work, a beautiful re-working of the traditional Irish lace, which had been elaborated and embellished with its own style in connection with the territory and artistry of Orvieto around the 192O’s but which, in the course of the 1 ant decades, had sadly suffered a consistent decline in production in Orvieto itself.

Courses at the school re-opened in October along with a new collaboration with Rakam and the School now enjoys a consultant status with the magazine, specializing in the traditional stitches connected with the regions of central Italy , such an “Ombra Stitch”, “Fiamma Stitch”, “Palestrina Stitch” and the “Assisi Stitch” together with the Orvietan lace –

These are all now well-known by the readers of the magazine who request pictures, samples, information and patterns for them.

The school is proud to have on its staff experienced local masters of the arts gifted with both a practical skill and teaching ability.

For each embroidery technique, the school offers: