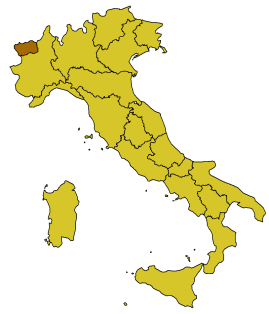 The Val d’Aosta occupies the northwest corner of Italy and shares borders with Switzerland to the north and France to the west. The region, which is Italy’s smallest and least populated, is home to Europe’s tallest mountains and a vast national park. It was in this rugged landscape, among the behemoths Monte Rosa, Matterhorn, Monte Gran Paradiso and Monte Bianco (Mont Blanc – Europe’s tallest) that modern mountaineering developed.

This region also helped the birth of downhill skiing. The once forbidding peak of Monte Bianco can now be conquered (in good weather) by an unforgettable cable car ride from the ski-town of Courmayeur.

The history of this region is linked to the two mountain passes through the Alps that connect Italy to the rest of Europe. From the Stone Age until the creation of the modern tunnel system, the St. Bernard passes have allowed travel in good weather, starting from the ancient Salassi people, to Hannibal and his elephants and the Roman Legions.

This area was conquered during the time of Caesar Augustus and was named Augusta Praetoria, from which the modern name of Aosta is derived. During the Middle Ages, the area was controlled by the Challant family, who left their mark by building many of the region’s castles, and the House of Savoy, later to become the kings of Italy.

The close proximity to France has also led to several periods of French rule and even today, the region is officially bilingual. Today Val d’Aosta is an autonomous region, known mostly to Italians as a winter sports paradise, however travelers are now discovering that there is plenty to discover, all year round.

The cuisine of Val d’Aosta has been influenced by the close proximity of France and the Piedmont, yet retains its own unique character. It is the only Italian region to produce Fontina cheese, a favorite ingredient in many dishes including local specialties like fonduta (fondue) and Cotoletta alla Valdostana – a veal chop covered in Fontina. Hearty soups and stews are popular in this mountainous region and one of the favorites is Capriolo alla Valdostana, a venison stew made with wine, vegetables and grappa. Other northern favorites like polenta and risotto are also prepared according to local traditions.

Valle d’Aosta and its natural beauties

Grapes have very little room to grow among the rocky crags of the mountains. However, it is this unique terrain that makes the Aostan wines so unique. The grapes include Italian (Nebbiolo, Dolcetto), French (Chardonnay, Pino Noir) and German (Muller Thurgau) varieties. Standout reds include the DOC recognized Donnas, ruby colored Chambave Rosso and the full-bodied Nus Rosso. Whites include the simply named and crisp Bianco and the Blanc de Morgex with its hints of alpine meadows. Nus-Malvoisie Fletri is a type of sweet yet strong white dessert wine. For spirits, grappa is made throughout the region after the harvest and shows up in the most unlikely of places – like in the local venison stew.

The former Roman fort-town of Augusta Praetoria is one of the few remnants of the Empire that still follows is original street plan. For a small city, there are plenty of large Roman ruins to explore, giving Aosta the nickname “Rome of the Alps“. The Arch of Augustus commemorates the defeat of the local Salassi and the imposition of Roman rule starting in 25 BC. The Porta Praetoria was once the main city gate with a vault made of huge stones, another example of Roman engineering. The Duomo occupies the former Roman forum and contains tombs of Savoy counts as well a cloister that houses the tombs of the Challant family. Close by are the ski resorts of Pila, the castle town of Sarre and many scenic drives among the mountains.

A walk through Aosta

This is the major ski resort in the area, and one of the most popular in the whole of Europe. However, this resort town was not born because of skiing, but because of the local hot springs and the emerging sport of mountaineering, in the 19th century.

Today, the Italian side of Monte Bianco (where Courmayeur is) is a haven for all Winter sport fans, from jet-setting celebrities to backpacking ski-bums. Two modern engineering marvels allow travelers to cross the Alps into France without using the forbidding St. Bernard Pass. The Mont Blanc tunnel is the quicker of the two, while the cable-car ride over the mountain gives an exhilarating view of the Géant and Vallée Blanche glaciers on the way to Chamonix. In the warm months, the mountains are packed with hikers, as the dense trail system is the most thorough in the Alps. Fishing for trout in the mountain streams is a favorite pastime of tourists and locals alike, with the catch often showing up on the dinner table.

In 1922 this former hunting grounds of the House of Savoy became Italy’s first national park. It covers over 1300 square miles and it extends into France. It is true alpine wilderness, with meadows and lakes overlooked by snow-capped peaks – perfect for some solitude after visiting Italy’s often-hectic cities. The park is the last refuge of the European Ibex, with a few thousand throughout the park as well as many rare species of alpine flowers. A good way to see the park is to use the network of rifugi (refuge huts) to stay overnight. Staying in a rifugio gives you the best chance at seeing the native wildlife when it is most active, not to mention a chance to try the local cuisine. A visit in June or July will reward the visitor with meadows full of alpine flowers and butterflies.

Where can I find more info on the history of this region especially in the Middle Ages? Just found out that my ancestors originally come from that area before moving to France in the 1300.