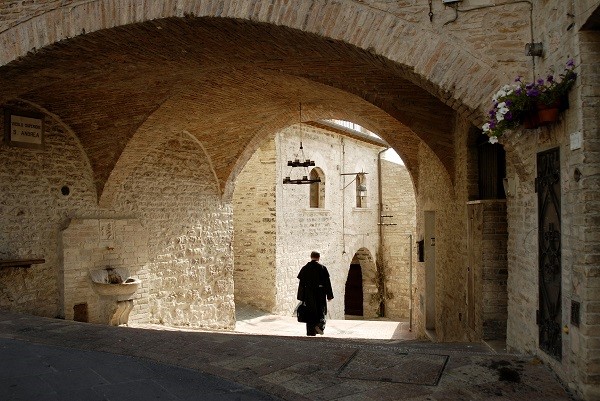 Assisi is a comune and town located in the Umbria region in Italy in the province of Perugia. The town is located on the west of Monte Subasio and is mainly famous as the birth place of St. Francis. St. Francis had started the Franciscan religious order in Assisi in 1208. St. Clare was also born in the town.

Around 1000BC several Umbrians settled in the Tiber Valley and in the region where Assisi is now located. These settlements were small and fortified and were later taken over in 450 BC by the Etruscans. The Romans came in next and several Roman remains can still be found in town today.

The Basilica of San Francesco d’Assisi

The basilica of San Francesco d’Assisi is a UNESCO world heritage site. Construction of the basilica was completed in 1253. There is an upper and a lower church, a convent and a monastery within the complex. The lower church has several beautiful frescoes made by famous artists like Giotto and Cimabue. The upper church also has several frescoes that depict various scenes from the life of the Saint. The church had to be closed for two years in 1997 for restoration and repair when it was badly damaged during an earthquake.

The Cathedral of San Rufino

The cathedral of San Rufino has a Romanesque architecture with rose windows and the interior is decorated in 16th century artifacts. The cathedral is built on top of a Roman Cistern and is a very important church in Assisi. Saint Clare, Saint Francis of Assisi and several other saints were baptized in this church.

The basilica of Santa Chiara has a beautiful rose window and gothic interiors. The construction of the church began in 1257 and has beautiful paintings and frescoes inside. The tomb of the saint is located inside the church. The remains of Saint Clare were transferred from the Chapel of San Giorgio.

The basilica of Santa Maria degli Angeli is located at the foot of the hill of Assisi and houses the Porziuncola. The construction of the basilica took place in 1569 and the building encloses the 9th century church of Porziuncola which was considered to be one of the most sacred places in the location. There is a central nave and two aisles and ten different side chapels. Directly under the dome is the Porziuncola. The interior has been kept very simple with only very few decorations but the side chapels are richly decorated.

The Chiesa Nuova is built over what was thought to be the home of St Francis’s parents. The church was built in 1615 and is believed to be the place where the saint was born. The architecture of the church is late Renaissance and has a high dome which has been divided in coffers. There is a nave and transepts which have been built in the form of a Greek cross. The high altar is built where St Francis’s room once stood. The rooms adjoining the church contain a museum and a library that includes various rare books and codices that are Franciscan in nature.

Assisi is located quite close to the town of Perugia. Visitors coming from Florence or from Foligno or Rome can take a train at Terontola for Assisi. The train station is located three miles away from the center of the town at the foot of the hill. Visitors can also travel by bus which connects the town to several cities in the region. The buses stop at either Piazza Matteotti or Piazza Garibaldi. Those who are travelling by car can travel on the A1 motorway and then exit at SS75.

There are several parking lots located in Assisi just outside the main city walls. Within the city walls, the historic town can be explored on foot since it is the best way. Assisi is a mountain town so the streets are quite steep in a few places. It might be a little difficult to walk around for long periods of time. Fortunately, there are several cafes and small gelato shops located throughout the town so its easy to take breaks and catch your breath.

Assisi is an important tourist location in the region and several people visit the town each year to admire its many beautiful churches. For this reason there are plenty of good hotels in town. Most hotels can be found close to the center and near the main bus station. There are also a few good bed & breakfasts in Assisi. Some suggestions are the hotel Dal Moro, hotel Fontebella srl, hotel JFI Hermitage, hotel S Francesco Srl, hotel Berti, hotel Umbra Srl and Hotel Da Angelo.

Visitors in Assisi would have plenty of options to choose from when it comes to eating out. There are quite a lot of good restaurants, trattorias and pizzerias in the town that serve simple but delicious traditional dishes as well as Italian cuisine from other regions. In most places, food is quite typical to the region and is preferred by the locals. The pizzas in Assisi are also worth trying since they are made with the freshest ingredients. Some of the best known restaurants in Assisi are ristorante La Fortezza, ristorante Pizzeria Da Angelo Assisi, ristorante Minerva, ristorante dei Priori, ristorante Frate Sole and ristorante Belvedere di Preziotti Maria Maddalena.

There are a few shopping streets in Assisi that are lined with rows of tiny shops selling clothes, shoes, jewelry, sounvenirs and various other handicraft items. The older section of the town has various smaller shops where locally made handicrafts and pottery can be found. The weekly markets in Assisi are quite colorful and lively and are great places to interact with the locals and to understand the local lifestyle in this region.