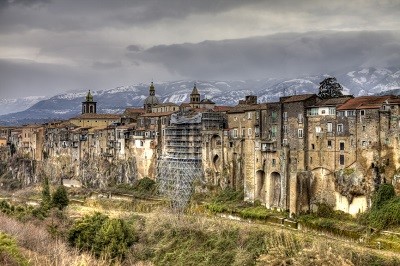 Even without an ancient set of ruins to see, a cathedral to visit, or some centuries-old castle to photograph, the sights of Italy away from the sea are as breathtaking as it is on the coastline. So much of the country is filled with rolling hills, mountains, and lush scenic rural valleys that you have a hard time not filling your days in one of these scenic landscapes. Of the inland parts of the country, Tuscany, probably wins the popularity contest. It’s sighted in movies, stories and songs. However, there are many intricate places on the map that rival its beauty yet do not receive its accolades.

One such area is Benevento, in the South East portion of Italy. Benevento sits about 50 km northeast of Naples. It is a town of the region of Campania and is the capital of the province of Benevento. Atop a hill with a beautiful view of the valley below, Benevento emerges at the convergence of the Sabato and Calore Irpino rivers. Like Avellino, its neighbor, the Catholic church plays a vital role here, also, as Benevento is the seat of a Catholic Archbishop.

The province of Benevento, an inner province of the Campania region, borders the regions of Molise and Puglia. The area itself is mountainous, providing some unbelievable photo opportunities. The town of Benevento and its 60,000 or so inhabitants sits in the south central portion of the province.

What brings Benevento to life, in addition to its picture postcard surroundings, is its rich history. It was the meeting place of six main roads, which brought many to and through this area. The fortification of town was enhanced by the many stretches of medieval fortresses as well as the Calore and Sabato Rivers. The rivers flow from the Monti Picentini mountain range through Avellino, into Benevento and then into the Volturno. Location, location, location was the apt phrase for this early strategic stronghold of this part of Italy. To many historians it is one of the most important cities in Southern Italy. One important transportation route that ran right by this city was the Via Appia, or Appian Way. The Appian Way was one of the first and one of the most strategically important roads of Ancient Rome. It connected Rome to Southeast Italy. Even Statius, a Roman poet of the first century, wrote of its importance – “the Appian Way is commonly said to be the queen of the long roads”. Its history dates back to 312 BC.

The town’s importance was further evidenced by repeated visits from Roman emperors and the quantity of coins it minted. Roman generals also frequented Benevento, a further sign that this area was not simply a place of rest and relaxation. The frequent visits from the governmental elites like Nero, Trajan and Septum, was probably the reason that one of the city’s most famous ruin, the Arch of Trajan, was erected there in 114. The Arch is one of the most pristine and best kept Roman structures in the Campania region. Like the Arch of Titus and Trajan’s column in Rome, the Arch depicts scenes from his life and his triumphs in battle. The structure marked the entrance of the Via Traiana, the road built to shorten the path from Rome to Brindisi. So well preserved, the Arch is a must see when travelling to Benevento.

The history buff in you will certainly appreciate the many other historical sites in this area. For example, Emperor Hadrian constructed a theatre, which at one point could house about 10,000 spectators. The theatre is now used for theatre, dance and opera. The Ponte Leproso, a bridge still used today that was on the Via Appia over the Sabato River is a wonder of ancient architecture and engineering. In addition, in some of the old houses in this area, you can still see some ancient fragments and inscriptions that were built in to these structures.

Other than the Arch of Trajan the most visible piece of history here is the castle of Benevento, or Rocca dei Rettori. It sits at the highest point in town and was used by many different people occupying this town at different stages. Inside the Palazzo della Prefettura portion of the castle is a museum with contemporary art.

Other notable spots of interest include the Santa Sofia, with its signature bell tower, which dates back to 760, Sant’Ilario dating back to the 6th and 7th centuries, the Palazzo di Paolo V from the 16th century, the church of San Salvatore, from the High Middle Ages and the Cathedral of Santa Maria Assunta dating back from the 9th century.

A walk through the city and surrounding area is a walk through time. Each ancient edifice tells another story of what life was like in Benevento and how it came to be what it is today.

The economy of Benevento reflects its surroundings. It is mainly agricultural and food processing including the unique flavors of Strega candy and Strega liqueur. The word “strega” in Italian means witch. At times the city has been called the city of witches. You will find references to this lore in different parts of Benevento’s culture.

The city is easily accessible from Rome and Naples by car with easy connection to both cities, as well as by train.  So, if you are in either city and want to take a trip this way, the road to Benevento is an easy course.

After your trip here and a walk through some of the Roman monuments, you can grab a coffee at many of the cafes surrounding the Piazza Roma. This wide pedestrian street is at the center of town and runs between the castle and bell tower of Santa Sofia church. After a stroll down the Piazza Roma you may want to take in the Piazza Risorgimento and Piazza Santa Maria. Both of these spots open up their marketplace activities a couple of days during the week. Similar in style to American flea markets, you will find a variety of all things unique to Benevento at each vendor stop.

Benevento, rich in history and culture, presents a pleasant change to the traditional and heavy tourist areas of nearby Naples and the Amalfi Coast. The city provides the traveler with an opportunity to experience a little bit of a southern Italian town. Its unique combination of mountains, ancient ruins, and rural setting lets one absorb the more typical feel of daily life.

My great-grandparents were from Benevento…..D’Addio and Borzillo.

My grand parents were in or near here 1880’s before emigrating to USA.
Giuseppe Fonzo, Angelina Loungo.

My grandfather, Leopoldo DiNapoli, was born and raised in Benevento…..

Grandparents from Benevento. Ceglia. Any relations?