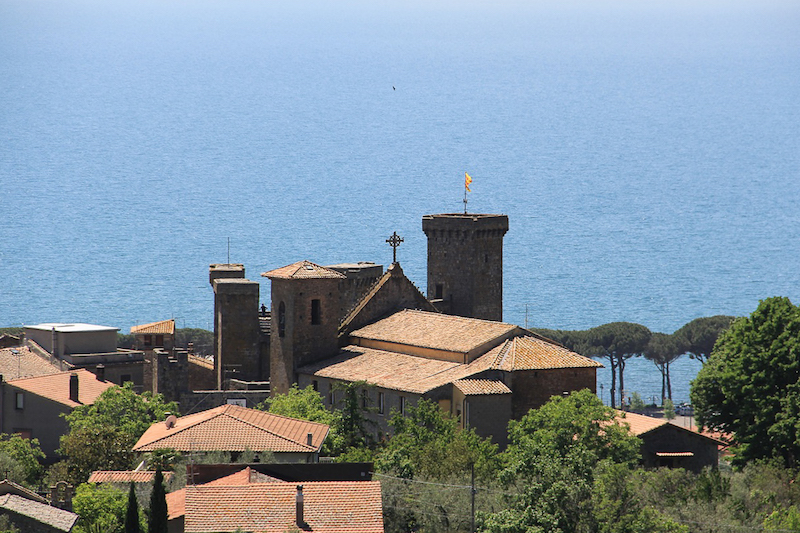 Bolsena is located in the region of Lazio in Italy in the province of Viterbo. The town is located on the shore of the famous lake Bolsena. Bolsena is located quite close to Viterbo and Montefiascone and the famous Via Cassia passes from the town. Bolsena is quite a small town with an area of 63 sq km and population of just around 4200 but is a resort town and in the summer the population grows to 20,000. The town is located at an altitude of 350 meters above sea level on one of the craters of the Volsini Mountains.

According to scholars, Bolsena is the successor of the ancient Roman town of Volsinii and is best known for the miracle which had occurred in town in the 13th century.

The church of Saint Cristina is the most interesting place to visit in Bolsena apart from the lake. The church is basically a complex which is divided into different parts, an underground basilica and the main three aisled Romanesque building. The underground basilica is also known as the Grotto and has catacombs. There is a 16th century terracotta statue of the Saint placed where she is buried. There is a beautiful altar and a pyramidal ciborium which is supported by pink marble columns dating back to the 8th century.

The castle of Monaldeschi was built in various stages from the 11th to the 14th century and rises tall amidst the medieval quarter of Bolsena. The ground plans are quite irregular, with four different towers made in different sizes and are all different in architecture. The main castle is gothic in architecture and a regional museum is now located within the rooms of the castle.

The church of San Francesco in Bolsena was built in the 13th century and has an elegant Romanesque style of architecture. Many changes have been made to the church in the centuries that followed which has resulted in a mixture of gothic and Romanesque features. The interior is quite simple with a single nave and a large theater has been constructed which is used for various cultural activities.

The Martana Island is located in Lake Bolsena and has a harsh terrain, but the landscape is still beautiful and enchanting. The island, featuring 7 churches, had a religious importance in the middle ages and is known to be the place where Amalasunta had met her tragic fate. The island is located in the middle of the lake and can be reached by boat and ferries. Lately however the ferry can only show you around the island since the owner does not allow boats to desembark on the island.

The Bisentina Island is the second island located in Lake Bolsena and is quite popular with tourists. The island had been formed due to volcanic eruptions and is larger in size in comparison to Martana Island. Unlike Martana Island, the Bisentina Island is lush and covered with vegetation. There are several oak tree grooves and many different species of animals have made the island their home. The island had been inhabited during the Etruscan and Roman times. By personal or rented boat is the only way to reach the island which is privately owned. Tourist are not allowed on the island itself.

The easiest way to reach Bolsena from Rome is from Viterbo or Montefiascone. Since Viterbo is quite a large city, it is well connected with several destinations in Italy. Visitors coming from other parts of Italy can reach Viterbo and then get to Bolsena by a bus. The town is well connected to Viterbo, Montefiascone and other smaller towns in the province by the state buses. Buses depart for Bolsena almost every hour from the bus stations in all of these towns so reaching here is fairly easy. Another way to reach Bolsena coming from the north is by Orvieto where there is the Autostrada exit.

Moving Around in Bolsena

Bolsena is quite a compact town so moving around is fairly easy. The main attraction in Bolsena is the lake and a handful of other attractions within the town which can all be easily visited on foot. Those who have their own cars can drive around the town easily since traffic here is not much of a problem, however, getting parking spots might be a little difficult in peak tourist seasons. Parking for tourist requires a fee in most places.

Bolsena is quite a small town but it does have ample accommodation options mainly because it attracts quite a lot of tourists each year during the Summer months. There are several hotels, Bed and Breakfasts as well as farm houses and villas which can be rented by tourists. Hotels located close to the lake are generally more expensive since they offer good views of the lake. Some of the best known hotels in Bolsena are hotel Royal, hotel Lido, Ai Platani hotel, Relais Del Lago, hotel holiday etc. There are also quite a lot of hotels located in Viterbo which is located close to Bolsena.

There are quite a few good restaurants in Bolsena because of the number of tourists that it attracts to the nearby Lake. There are many small pizzerias, trattorias and bars as well as some cafes located close to the lake and in other parts of the town. The trattoria del Moro, right on the main street bringing to the lake is quite suggestive. The restaurants situated close to the lake are, by Italy standard, quite inexpensive and some of them offer good food with fresh fish caught from the lake. The lake is a deep water lake so the fish does not have the typical muddy taste of fresh water fish and the Coregone is the most popular fish.

Bolsena has many places to shop. The older section of the town has many smaller shops that sell beautiful locally made products, wooden artifacts, terracotta pottery and jewelry. There are also plenty of wine shops in Bolsena that have a variety of wines and local olive oils that are famous to Italy so visitors can purchase a good bottle.