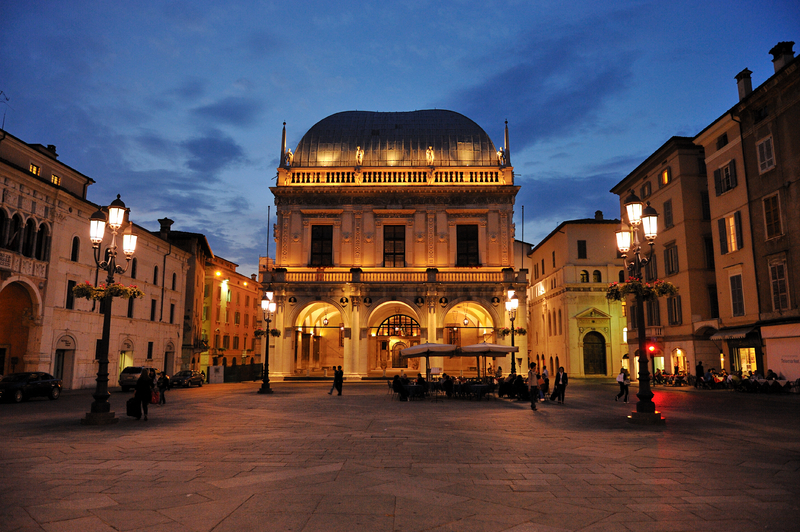 Brescia is a city located at the foot of the Alps in Lombardy Italy. The city has had a fascinating history going back centuries. Even before it was conquered by the Romans in 225 BC, it already had a lot of history behind it. The signs of this history can still be seen everywhere in the old town of Brescia, although, the new town doesn’t have much more to offer.

The town and most of its attractions tend to get very crowded with visitors as well as locals, especially in the peak tourist seasons so visiting the city in off seasons is the best thing to do.

Tempio Capitolino are old Roman ruins, the last of the Roman ruins of the city’s forum. It was originally built by Emperor Vespasian and information is available in English.

The castle was originally built in the Roman times and was later renovated in the 16th century. The castle now houses a museum of armory. The castle is situated on top of a hill and provides beautiful views of the city and the Alps.

The pre-renaissance churches have beautiful 12th century crucifixes and large stone domes. The city cathedral was built before 150 years and its dome is the third largest in Italy.

La Loggia is located on the Brescia’s main square and houses the city hall and the center of the regional government here. The main halls are open to public for exploring the architecture and the interiors and the location is often the site for public demonstrations.

Mille Miglia was once one of the world’s top automobile races; however, it was discontinued 40 years back. It now serves as a museum of automobile history. Every year in May a slow procession of automobiles is held here from where the automobiles take off on a 1000 miles tour in northern Italy.

The old historic center of Brescia is the most interesting part of the city. Here there are plenty of open markets, shopping districts, beautiful pedestrian streets and cafes which can be explored and enjoyed on foot.

Piazza della Loggia is a beautiful Piazza surrounded by some historic buildings and is often the meeting point for locals. The highlight of this Piazza is the open market which is held here every Saturday. The open market sells almost everything, fresh food items, clothes, jewelry, souvenirs, locally made products, handicrafts and some odd trinkets. The market is very colorful and is quite busy every week since most locals flock here to find some inexpensive deals. This is a great place for those looking for some unique souvenirs.

The airports in Milan and Verona are not very far from the city and taxis as well as buses easily connect the airports to the city. The next best option is to reach Brescia through trains; a lot of trains connect the city to other destinations including the Eurostar as well as the regional trains. Cities like Verona, Milan, Bergamo and Venice are connected to Brescia through trains.

There are a few options of moving around the city. The historic center of the town can be visited on foot since it is not really that large. Also, there is an autobus system that operates in the center of the town which is used widely by the local commuters as well as the tourists. There is also a subway system which is under construction, although it would not be completed till 2013. The other option would be to explore the city through rental cars or by taxis.

Brescia is not really a major tourist destination like some of the other cities in northern Italy so the options in terms of hotels are limited. There are a few good hotels but most of them are costly. Also, if you are looking for some inexpensive places to stay like bed & breakfasts and hostels you wouldn’t find many options in the city. The hotels in Brescia are either very costly or are mid-range. Some good places to stay in the city are Continental Hotel, Ai Ronchi Motor Hotel and NH Jolly Igea.

Brescia has some very good options for dining out. The best thing to try in the city would be local food; Brescian food is known to be quite hearty and heavy on butter and beef. Some good local dishes to try are Casoncelli, tortellini with beef, polenta taragna, spiedo etc. Another thing to try here are pizzas, there are plenty of pizzerias here in Brescia that have some great varieties of pizzas. Also, there are plenty of cafes and Osterias here that sell some great local cuisine. There are quite a lot of local dishes like polenta which are only available here during winters.

The shopping district in Brescia is located in the historic old town. The entire stretch from portici to Piazza Della Loggia is lined with several interesting shops selling clothes and jewelry. Also the local markets that are held here in Piazza Della Loggia and Via San Faustino on Saturdays are worth visiting since they sell some unique items at very low prices. The downtown in Brescia also has some good places from where visitors can purchase good textiles and handicrafts as gifts or souvenirs for people back home.