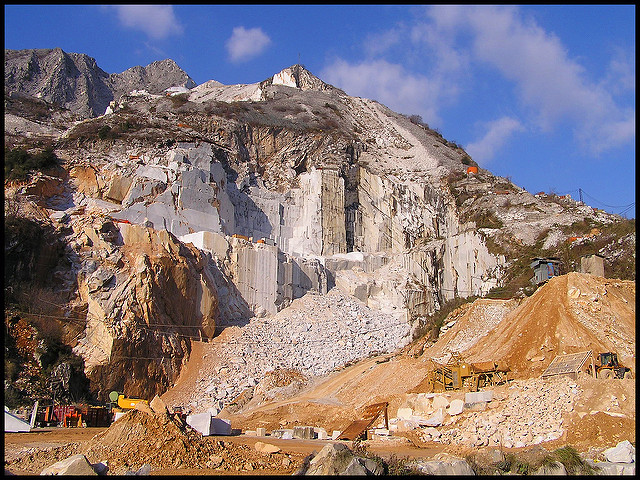 Carrara is a city located in Tuscany, Italy in the province of Massa Carrara. The city is located on the Carrione River, located close to Florence. Carrara is mainly famous for its marble quarries from which white and bluish grey marble is quarried.

The city is known to have been inhabited since the 9th Century BC when the Apuan Ligures lived here. The marble quarries here were set up by the Romans first and the city was built so that the workers working in the quarries would have a place to stay. The city has been exchanged by many hands over the past centuries, marks of which are still visible at plenty of places.

The Duomo of Carrara is the most important religious place in the city, although it is not as impressive as some of the cathedrals in the other cities of Tuscany. However, it does have some good art work and detail work in the interior.

The Ducal Palace in Carrara was built in the 16th century and is now used as the academy for fine arts. The palace was built over a Lombard fortification that had existed here centuries ago. In the later centuries, several changes were made to the palace and various additions were done.

Church and Convent of San Francesco

The church and the adjoining convent of San Francesco are impressive buildings. These were built here in the 17th century and are completely Baroque in style, their architecture is quite beautiful and the interiors are equally good too.

Church of the Suffragio

The church of the Suffragio was built in the 17th century as was later renovated in the 19th century. On the outside there is a large Baroque style marble portal which is quite impressive. Another noteworthy feature of the church is the beautiful “Madonna and the souls of the purgatory.”

The Palazzo Cybo Malaspina was built centuries ago and was originally used as a private residence. Although the size of the palazzo is not as intimidating and as impressive as the palazzos all over Italy, its architecture is still quite noteworthy and is typical to this region.

The sanctuary of the Madonna Delle Grazie all Lugnola was sanctified in 1676 and is also an important religious location in the region. The sanctuary is quite well preserved and maintained and over the years, renovation works have been carried out here several times.

The church of Santa Maria Assunta was built here in the 16th century however; most of the interiors have pieces from the 15th century. The interior has a single nave and two separate aisles and the altar and the art work is quite good.

Carrara is well connected to the towns in Massa Carrara province as well as the cities in Tuscany through a network of railways and buses. The trains connect Carrara to Massa and other smaller places in the province as well as Florence, Genoa and other major cities in Italy. Buses are also extensively used by the locals and the tourists since getting tickets for buses is relatively easy and the services are quite fast and efficient. There are a few buses that run everyday between the towns in the province and tickets are easily available.

Carrara is quite a small place and is compact in size. There aren’t many places to see here and most attractions are located in the center of the town. Locals commute through the public buses since this is the easiest way of transportation. Buses are frequent and cover the most important locations within the city. Visitors can also explore the town by car; parking is not much of a problem since the city is not yet congested with traffic. Walking around town is also quite hassle-free and easy.

Carrara has decent options in terms of hotels and accommodation facilities. Although the hotels are not as grand and as lavish, they are still comfortable and charming. The hotels are usually quite inexpensive, except in the peak tourist seasons. There are also quite a lot of inexpensive Bed & Breakfasts in the city which have clean and comfortable rooms. Those who want a more authentic experience can take refuge in one of the old villas that have been transferred into hotels now. Some good hotels in the city are located around the center of the town and the railway station. Some of the best options for staying in Carrara are bed & breakfast Villa Isa, Villa Belvedere, B&B Il Monticello and La Chicca. There are also a few apartments and villas which can be rented.

Eating Out in Carrara

Carrara has some good restaurants, but they mostly serve Italian cuisine and local regional dishes. The restaurants that serve international cuisines like Mexican, American, Japanese or Asian are usually expensive and are not really good either. The best thing to do then is to eat where the locals eat. The pizzerias here serve some great freshly made pizzas which are so famous in Italy. The ingredients used are usually fresh and the dough is quite unique. The smaller restaurants in the older section of the city serve home style dishes and are quite inexpensive too. You would also find good selection in wines in most restaurants here.

Carrara is a small city so visitors wouldn’t really find large malls or many shopping complexes here. Although there are a few that sell international brands and merchandise. It is much more interesting to explore the shopping streets that are quite crowded in the evenings with locals. Here visitors would find many small shops selling silk clothes, cashmere of good quality, lace and some good woolen products. Despite terracotta products being not typical to this region, there are plenty of places where one can find them.