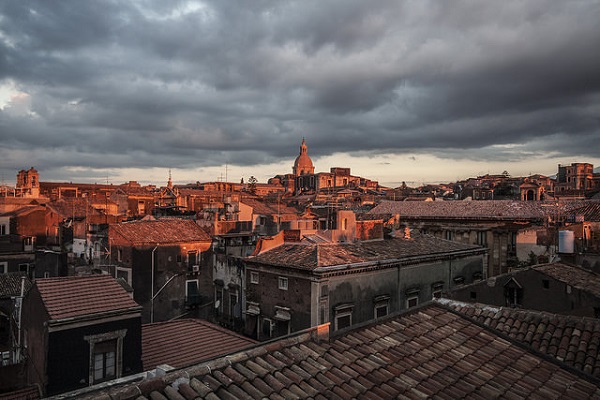 Catania is located on the eastern coast of Sicily in Italy and is the second largest city in Sicily. It is located at the foot of the biggest volcano in Europe, Mount Etna. Catania is a major transport hub, university center and economic hub in the area and is known for its active nightlife and vibrant culture. Catania is also known for its architecture which is mostly Baroque and urban style due to the major devastation that it faced in the earthquake of 1693. Catania attracts thousands of tourists from around Italy as well as other countries through the world.

Piazza Del Duomo is the main square in Catania and the center point for all activities. The square has a giant elephant statue which has become the symbol of the city in the last few decades. The Piazza is a great place to just sit and relax and watch the people passing by. The Piazza is surrounded by a lot of historic buildings and important monuments.

Via Etnea is the main shopping destination in Catania and is lined with shops selling numerous types of local as well as branded merchandise. The street also has lots of churches as well as imposing buildings, some of which are architectural wonders. Locals like to stroll around the street at a leisurely pace in the evenings and so it is a good place for people watching.

This is an opera house built in the 19th century and it is located on Piazza Teatro. The Piazza is a favorite place for the younger crowds to meet and remains lively and bustling till late hours in the night. The opera house itself is quite imposing and has beautiful architecture.

Piazza Stesicoro is a lively Square that has the ancient ruins of the Roman amphitheater. The piazza is also where the main market in Catania is located; the main market is lively and colorful and is the place where the locals shop for their everyday needs. The main bus center of Catania is also located here.

The renowned fish and food market is located just above the Piazza Del Duomo and is known to be the best fish market in Sicily, the market remains busy at all times of the day and sells exotic items and fish food, a great place to experience the local lifestyle.

This imposing building used to house the biggest monastery in Europe at one time. The monastery is no more functioning but the building is now used by the University of Catania, which is the oldest university in Sicily.

Mount Etna is the biggest volcano in Europe, and is a must visit. There are several guided and organized tours in Catania that take tourists to the Volcano and the views offered from the top of the mountain are spectacular.

Catania has a major airport which has several scheduled flights arriving from and departing to various destinations in Italy as well as Europe. The city also has well developed train lines that have regular trains going up to and coming from various cities on the east coast of Sicily as well as other destinations in Italy like Rome and Naples. Travelling by bus is also a good idea since the bus services are regular and inexpensive; buses arrive at Catania from most cities in Sicily and the bus station is located quite close to the center of the city.

There are several options for transportation for moving around in the city. There is a metro line, although it’s quite short, that runs through the city at most major destinations. Public buses are quite regular and cover almost all locations in the city, although they do tend to get crowded. Taxis are also available to travel anywhere in the city and they are generally not very expensive. Catania is a compact city so it is just as easy to explore the town on foot. For visitors who are planning to visit Mount Etna there are also special trains and metros that can be used.

Catania being quite a large city has several different options for hotels and accommodation. There are plenty of hotels in the city that are four and three stars, providing luxurious accommodations and excellent services. However, those travelling on a lower budget also have quite a lot of options; there are plenty of comfortable and affordable hotels through the city as well as Bed and Breakfasts and hostels. Some of the best hotels in the city are Hotel Catania Cristal Park, Hotel Agathae, Hotel La Ville and Hotel Nettuno. The family run hotels in the city are quite charming and affordable.

Eating Out in Catania

Catania has several different restaurants, cafes and bars serving regional as well as international cuisines. Catania is famous for quite a lot of its local dishes which can be found in most of the restaurants here. Some of its famous delicacies are tavola calda, cannoli alla ricotta which is now famous through the world and Arancino which are fried rice balls with cheese and tomato. Catania is located by the city and the fish market here is quite famous so the sea food and fish dishes are also worth trying in the city.

There are plenty of locations in Catania to do shopping. The famous Via Etnea is the main shopping destination in the city; the street is lined with several shops where visitors can find almost anything, local as well as branded items. Apart from Via Etnea the main market located near Piazza Stesicoro is also worth a visit. The main market is a typical Sicilian market with narrow winding streets and tiny shops selling trinkets and items that are made locally. The colorful market remains vibrant at all times and most of the locals do their daily shopping from here.