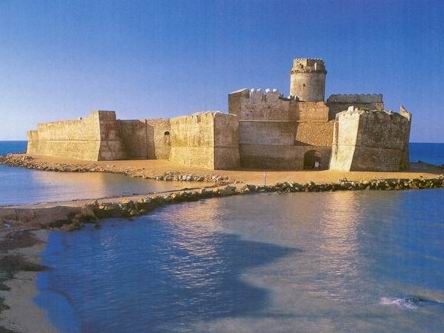 Crotone is a city in Calabria. Located along the coast of Southern Italy, Crotone attracts tourists from all around the country as well as the world due to its panoramic location and  its classic Italian lifestyle. The city has had a long and eventful history, with several ups and downs, and has now managed to become an economically renewed urban location. Throughout history, the city has witnessed several power struggles for its dominion. It was first part of the Byzantine Empire, then taken over by the Saracens in 870 AD.Later, it was conquered by the Normans and then by  the Kingdom of Naples.

The cathedral was originally built in the 9th-11th century, but has been rebuilt and restored several times since then. Today, its exterior is neo-classical, whilst its interior is baroque. The cathedral’s baptismal font dates back to the 12th century and the image of the Black Madonna preserved here was brought to Crotone from the East when the church was first built.

The Castle of Charles V dates back to the 16th century and houses the town museum, where several remains found in the ancient site of Kroton are kept. The remains of the walls and several watch towers are worth a visit: they were all mainly built in the 16th century, but still stand undamaged to this date.

Le Castella is a walled hamlet on the island of Capo Rizzuto, close to Crotone. Its origins are not clear, but it was probably there in 500 AD. The castle can only be visited on foot since there is only a narrow strip of land that connects the island to Crotone. The castle dates back to several centuries and the architecture is quite noteworthy.

The National Archeological museum is one of the best museums in town and is a must visit for anyone who is interested in archeology. It houses a rich collection of classical objects and remains, mostly from the times of Magna Graecia, the Greek colony on Italian soil, inaugurated in the 7th century BC.

The Capo Colonna archeological park is located by the coast in Crotone and is of extreme interest for all history and archaeology buffs. It holds some of the most amazing vestiges of Magna Graecia still extant. Among them, the remains of a 5th century BC temple and those of watchtowers and defensive buildings by the sea, all of which can be visited.

The Pescheria District in Crotone is known to be the historic center of town. The district has several historic buildings adorning the streets. Its architecture is typical of the region and it is perfect to be admired while walking around through the narrow alleys and cobblestoned streets that characterize with charm the area.

Crotone has an airport, Sant’Anna, which is served by several chartered airlines, so reaching the city by air is possible. Crotone also has a railway station and is easy to reach by train from the surrouinding areas. However, most of Crotone’s tourists come to the city by road, especially through the 106 Ionica or the Salerno-Reggio Calabria highway. Crotone also has a port, so you can reach it by ferry from its neighboring cities.

Moving around Crotone is quite easy thanks to its public transport system. Public buses are reliable and commonly used by locals and tourists alike.

Crotone has several hotels and hostels in all budget ranges for visitors. In all establishements, prices generally depend on the tourist season. If you are planning to stay in the city for a longer vacation, the best  option is to rent an apartment:  there are several different options available in terms of location, apartment sizes and rentals. Some of the best hotels in the city are Hotel Villaggio Costa Tiziana, Hotel Palazzo Foti and Alberto Helios hotel.

Eating Out in Crotone

Crotone has several different restaurants that offer various options to visitors in terms of cuisine, ambiance and drink choices. Most of the restaurants in Crotone are small and cozy, serving local regional dishes made from the freshest local produce and sea food. There are also several restaurants serving high end gourmet cuisine from France, Spain and other Mediterranean countries. Of course, opting for local dishes and fresh grilled sea food is the best option in Crotone, if you want to experience the local gastronomical delights. Like everything else in Crotone, the food here is simple and wholesome. Some of the best restaurants in the city are Ristorante La Sosta da Marcello, Ristorante La Pignata,  Ristorante Sparviero Due and several more. All of these restaurants can be booked ahead of time.

Crotone does have a few shopping malls and stores that sell branded clothing and merchandise; however, the best thing to do in Crotone is to visit local markets. The old quarter of town has various winding alleyways that have small local shops selling locally made craft and trinkets. The early morning fish market in Crotone is also worth a visit since it is so colorful and vibrant. Crotone is a good place to buy locally made handicrafts and terracotta products as souvenirs.