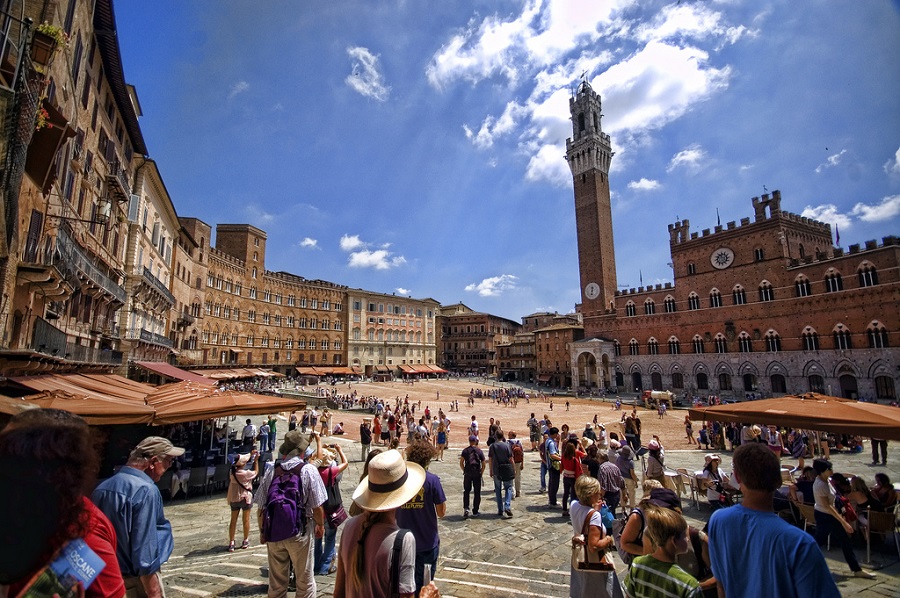 If you dream of getting lost in the winding streets and steps of a city surrounded by lush vineyards, then Siena is the place for you.

The gothic romance of this medieval city has been fiercely protected over the years and, in some ways, visiting Siena is like taking a step back in time.

Between the 12th and the 15th century, countless monuments and works of art were added to the natural beauty of the city, which has been on UNESCO’s World Heritage List since 1995. A city rivalling Florence in terms of urban planning, Siena is a sight to behold and surely not a city to miss for those visiting Tuscany.

One of Italy’s most enchanting medieval cities, Sienese identity is still defined by its 17 medieval contrade (neighborhoods), each with its own church, museum, and symbol. Look for streetlights painted in the contrada’s colors, plaques displaying its symbol, and statues embodying the spirit of the neighborhood. The various contrade uphold ancient rivalries during the centuries-old Palio, a twice-yearly horse race (held in July and August) around the main square, Piazza del Campo.

The Duomo of Siena

A visit to Siena would not be complete without stopping to take in the magnificence of the Cathedral, one of the best known examples of Gothic architecture in Italy. The construction of the cathedral began in the 12th century and the façade was completed by 1380. The Duomo was originally designed to be the largest cathedral in the world, however, once the transept and east wall had been built, a lack of funds stopped the realization of that goal.

Siena’s Duomo, with its multicolor marbles façade, is beyond question one of the finest gothic cathedrals in Italy. The interior, with its coffered and gilded dome and the inlaid marble floors, is striking. Among the numerous works of art contained here, the most notable are The Votive Madonna by Guido da Siena (over the altar), the wooden choral bench by Fra Giovanni da Verona (in the apse) and the marble bergamot by Nicola Pisano (in the left transept). Then, there are the works of Pinturicchio, Donatello, and Neroccio in the Chapel of San Giovanni Battista, and the Piccolomini Library, in the first span of the nave on the left, which is a collection of the library of Pius II.

Visitors to the cathedral will be treated to the beautiful gothic pulpit, supported by lions, designed by Nicola Pisano in the 13th century. Art lovers will also be pleased to see some beautifully preserved frescoes made by Ghirlandaio in the Sacristy and, in the bapistry, a font with reliefs created by Ghiberti, Donatello and Jacopo della Quercia in the 15th century.

Piazza del Campo is the main public square in Siena, and it is known to be one of the most beautiful medieval squares in Europe. Visitors to the piazza will want to make sure to see its various important buildings and monuments, such as the Palazzo Pubblico and its tower, the Torre del Mangia, as well as several more palazzi signorili (noblemen residences).

Piazza del Campo is known for the peculiarity of its shape, a descending half-moon. Twice a year, the famous Palio of Siena takes place here. The square is dominated on its lower, or western side, by the Palazzo Pubblico (Town Hall), a brilliant example of Tuscan Gothic architecture built between the end of the 1200’s and the beginning of the 1300’s in stone and terracotta. It was enlarged with the construction of the Salon of the Grand Council and the prisons. On the left side of the Palace is the Torre del Mangia, 90 meters high.

Its construction was directed by Minuccio and Francesco di Rinaldo, in 1325. At its base, is the Chapel of the Piazza, built between the 1300’s and the 1400’s. At the upper end of the piazza is the “Campanaria” (bell tower) Cell, built entirely out of stone. From the top of the tower one can enjoy a matchless view of the city and its surroundings. On the higher side of the piazza, above the Palace, one finds the Gaia Fountain, a rectangular basin built in 1419 by Jacopo della Quercia. It owes its name to the happiness with which the Sienese welcomed the arrival of water in Piazza del Campo.

Before the three hillside communities of Siena were established in the 13th century, the piazza was an open square used as a market. Walking along the piazza one will notice it was paved in red bricks in a fishbone pattern with ten lines that divide the square into nine different sections. The nine divisions are thought to be symbolic of the rule of the Noveschi, or The Nine, the leaders who were responsible for the splendor of the town in the 13th and the 14th centuries. In the past, as it is today, the piazza was the main center of the city and the focal point of life in Siena.

A tour of the piazza will bring you to the famous palazzi signorili, the beautiful palazzos that line it and were once home to the noble residents of the city. Unlike in other cities, these palazzos have matching rooflines and brick work to maintain uniformity, proof of the planning that went into the building of the city itself.

As already mentioned, the Fontana Gaia is another of the highlights of the piazza. Today, the beautiful fountain functions as a center of attraction for tourists visiting the city. Designed by Jacopo della Quercia and made entirely in white marble, it was inaugurated in 1419. It has a rectangular shaped basin adorned with bas reliefs on three sides showing the Madonna surrounded by Christian and Classical virtues.

The Town Hall or the Palazzo Pubblico is located in the main piazza in the historic center of the city. Construction of the palace began in 1297 to house the government. The structure of the palace is medieval, with various gothic influences. The lower story of the palace is made of stone, while the other stories were designed in brick. Along with the fountain, the palace is the focal point of Piazza del Campo and it fits in beautifully with the design of the square.

The Torre del Mangia is the bell tower or the campanile in Piazza del Campo. Designed by Lippo Memmi, one of the most famous artists of his era, the construction of the tower began in 1325. The tower was then adorned with a beautiful mechanical clock in the 14th century. The design of the clock inspired the 19th century Dock Tower of Grimsby, in England. The tower was named Torre del Mangia, which means the “tower of the eater,” after its first guardian, who was known to spend all his money on food.

The Torre del Mangia is visible from all parts of the city and is built next to the Palazzo Pubblico. It is the same height as the cathedral, a symbol of the equal power of Church and State.

The walls of the tower are about 11 feet thick on every side. The stairwell that leads to the top is almost always filled with visitors, since there are beautiful views of the city from its pinnacle. Keep in mind that only 25 visitors are allowed in the tower at one time as there is not much space on the stairwell.

The Cappella di Piazza is a marble loggia that was added to the square in 1352 and the façade that can currently be seen was created in the 14th century. The sculptures that decorate the cappella were created by Bartolomeo di Tomme and Mariano d’Angelo.

The loggia had originally a simple ceiling made from wood, which was then replaced by a marble vault in the 15th century, in typical Renaissance style.

A beautiful fresco was originally painted over the altar of the loggia, in 1537, by II Sodoma. The fresco has now been removed and is kept in the museum of the Palazzo Pubblico.

Siena is a beautiful city full of natural and man made beauty. A bustling hub full of museums, architecture, and culture, it is also home to one of the oldest universities in Europe, which brings its own vibrant life to the city. The beautiful city center of Siena offers something for everyone and an experience that no visitor will soon forget.