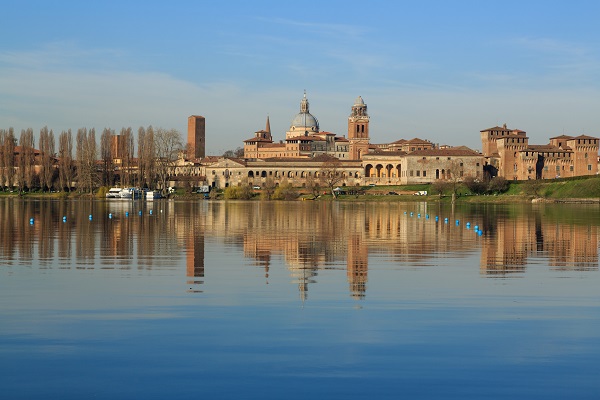 Founded in 2000 BC, Mantova was once an Etruscan village and is now capital of the province with the same name. It is a relatively large town of 100,000 in the region of Lombardia.  Surrounded on three sides by man-made lakes created in the 12th century, this world-famous city, known in English as Mantua, attracts visitors interested in art, architecture and history.

Mantova is known for its beautiful palaces, among them the impressive Palazzo Tè  or Tea Palace. The palazzo was designed by Giulio Romano in a Renaissance style and was the summer villa of Frederick II and the Gonzaga family. Today, the palace is home to the city’s Civic Museum, which features a large collection donated by Arnoldo Mondadori and Ugo Sissa.

A collection of buildings built between the 14th and 17th centuries, the Ducal Palace was used by the Gonzaga family as their main residence. All buildings are connected by galleries and corridors and visitors can admire the various gardens and inner courts, too. With over 500 rooms in the complex, there is much to see. One of the most famous aspects of the palace are the impressive frescoes in the Sala Degli Sposi.

One of the most important religious monuments in the city is the Basilica di Sant’ Andrea, which was commissioned by a member of the Gonzaga family, Ludovico II. The construction of the church began in 1462, based on the designs of Leon Battista Alberti, on the site of an old Benedictine monastery. The bell tower of the original monastery still remains.

Another important religious building in the city is the Rotonda di San Lorenzo. It is the oldest church in the city and was built during the Canossa family’s reign around the 11th century. The architecture and design was inspired by Jerusalem’s Holy Sepulchre and it was dedicated to Saint Lawrence.

The church features many ancient elements, such as a loggia for the female faithful, known as matronaeum. There are also many beautiful frescoes, most from the Byzantine school of the 11th and 12th centuries. The construction was completed in Lombard tradition, using two columns and details done in marble, many of which were taken from other ancient edifices.

Piazza Sordello is the main square in town. For centuries, it has been the heart of the artistic and cultural life in Mantova. Around it, you can find the cathedral, Palazzo Ducale, Palazzo Acerbi and the Torre della Guardia, as well as the Bishop’s seat. Mosaics and ruins of a Roman domus were discovered here in 2006.

Visitors interested in getting to Mantova will be pleased to find that the city is easily accessible. There are trains from nearby cities like Cremona, Modena, and Verona as well as Firenze and Bologna. There is also an extensive bus network, both state and private, that connects the city to various other points in the region.

If travelling by car, take the Milan-Venice A4 Highway to Verona, and then take the A22 Highway into Mantova. The nearest airport to Mantova is Verona-Villafranca.

Moving around the City

The fact that Mantova, spread over an area of 64 sq km, is not a very large city makes it ideal for tourists. The main monuments and sightseeing attractions are located in the center, so it is quite easy to visit them all on foot. Visitors can also use the local public buses or bicycles to get around.

Mantova attracts many tourists eager to see its beautiful architecture and various villas and palaces. The best accomodation can be found near the train station and visitors to the city have many options including hotels and Bed and Breakfasts, in all price ranges. Take note that finding low rates during peak season is difficult. Some of the best known hotels in the city are the Rechigi Hotel, ABC Comfort Hotel, Hotel Mantegna, Hotel Broletto, Hotel Dante Residence and Albergo Bianchi Stazione.

In Mantova there are plenty of good restaurants and pizzerias to choose from. Those who prefer to sample traditional dishes and regional delicacies should try the osterias and trattorias in the city, which serve simple wholesome dishes at low prices. There are also many good cafés and pubs that offer a selection of good quality local wines. Some of the best restaurants are Ristorante Aquila Nigra, Osteria della Fragoleta, Ristorante Griffon Bianco, Trattoria Alla Nuova Marasca, Trattoria L’ Ochina Bianca, Trattoria Due Cavallini and Trattoria Leoncino Rosso.

Mantova has a few good shopping streets that are lined with stores selling clothes, bags, jewelry, and footwear. In the older section of town, there are many small traditional shops selling locally made artifacts, handicrafts and souvenirs. Food shops offer a good variety of cheeses and olive oil and there are also stores selling local wines.

The ancient city of Mantova is now a bustling capital full of ancient buildings, art, and culture, just waiting to be enjoyed by visitors.