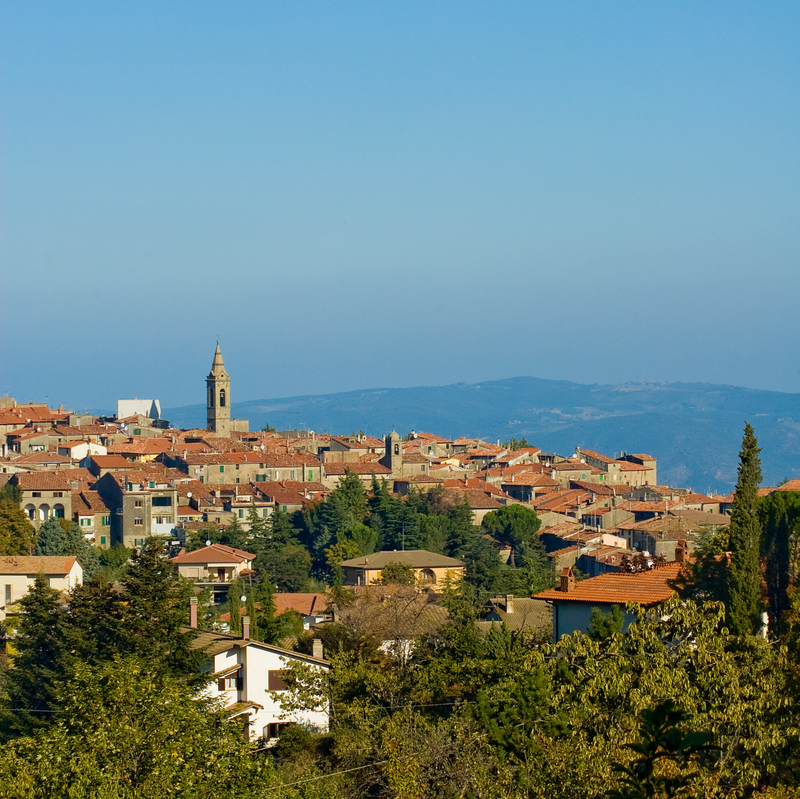 Montalcino is a well-known hill town located in Tuscany, Italy. Montalcino is located in the province of Siena and the cities located closest to Montalcino are Siena, Florence and Pisa. It is believed that the area where the town is located had been inhabited since Etruscan times before the rule of the Romans in the area.

Montalcino was first mentioned in a document of the 9th century which mentions a church that was present here since then. The population of the town grew when the natives of the nearby Roselle fled and took refuge in Montalcino. The economy of Montalcino is mainly based on agriculture, production of wine and of recent years, also on tourism.

The Chiesa Di Sant’Agostino is located close to the ancient fortress. The church was also built in the 13th century and its architecture is quite simple. It has a simple Romanesque façade and the interiors are also kept quite plain and beautiful.

The Musei Riuniti is located close to the church. The building where the museum is located used to be an old convent but it is now used as a civic and a diocese museum. The museum is definitely worth a visit since it has several beautiful sculptures made from wood and terracotta collected over the centuries. The collection includes a beautiful wooden crucifix, two 15th century wooden sculpture, various terracotta sculptures belonging to the Della Robbia and art works by Ambrogio Lorenzetti and Simone Martini.

The Duomo of Montalcino was built in the 14th century and was dedicated to San Salvatore. However, due to major renovation works that were done in the 19th century the façade is now neo classical under the direction of Agostino Fantacisi.

The Centro Storico is the historical center of Montalcino and one of the most interesting places to visit in the town. Like most places in Italy, the historical center is a maze of narrow streets and alleys that lead to rows of old houses stack against one another, old villas and mansions and small shops. There are also quite a lot of ancient churches, chapels and a few monuments to visit.

The Palazzo Communale is the town hall of Montalcino which was originally built in the 14th century. The palazzo has a beautiful architecture and an ancient tower is incorporated in the design. The façade is adorned with a coat of arms.

Getting to Montalcino, Tuscany

Montalcino is located quite close to three major cities so reaching here is fairly easy. The easiest way to reach the town is by train. There are several trains that leave for Montalcino from Siena, Florence and Pisa each day at regular intervals. There are also quite a lot of buses which reach the town from these three cities and other smaller towns in the province. Buses are usually quite comfortable and punctual and the tickets are easily available except in peak tourist seasons. Those who have their own cars can reach Montalcino quite easily by road.

Montalcino is not a very large town so visitors can easily move around without much problem. Most quarters of the town can be explored on foot since streets are beautiful and not very crowded. Another option is to travel by the local public buses which are widely used by the locals. Local buses cover most parts of the town and tickets are quite inexpensive. Visitors can also purchase a day pass if they prefer. Those who have their own cars can easily move around the city in their car, parking is usually not much of a problem. Traffic tends to increase in Montalcino in the peak tourist seasons.

Stay and Accommodation in Montalcino, Tuscany

Thanks to the rise in tourism, Montalcino has plenty of hotels to choose from. Most hotels in town are simple and comfortable, but there are also a few luxurious hotels. A majority of the hotels can be found around the center of the town and there are also a few good bed & breakfasts in Montalcino that provide good and comfortable rooms for quite low prices. Some good hotels to try in town are Hotel Vecchia Oliviera, Castello Di Velona (which has also a spa), Hotel Al Brunello, Albergo Giglio and Albergo Bellaria.

Montalcino has plenty of options for eating out. The town has several good restaurants, eateries, osterias, pizzerias, cafes and bars located all over the town. Mostly these restaurants serve local dishes and Italian delicacies but some also have other European and international cuisines. However, it’s best to stick to the local cuisine since this is the best. Dishes are based on fresh produce and sea food is heavily used in most dishes. Montalcino is known the world over for its famous local wine, especially its Brunello di Montalcino. Some of the best places in to eat in Montalcino are Ristorante Albergo Giglio, Taverna Grappolo Blu, Osteria Porta Al Casero and Ristorante Al Giardino.

Montalcino has a few small shopping streets close to the center of the town where tourists do most of their shopping. Most of these shops sell shoes, clothes and other locally made souvenirs which the locals sell at high prices to the tourists. The best thing to purchase in Montalcino is wine since the town is very famous for its many beautiful locally made wines. Montalcino is mainly known for its renown Brunello Di Montalcino, Rosso di Montalcino and the Moscadello wines. These can be found in almost all wine shops in Montalcino.