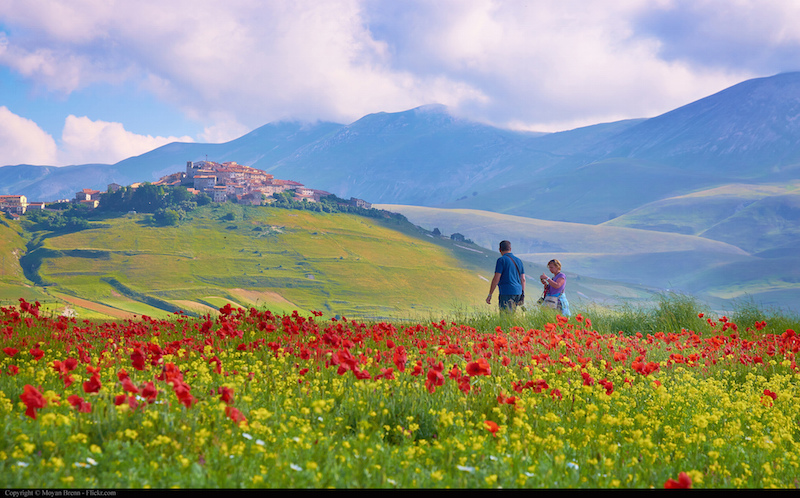 It is utterly painful and sorrowful to write an introduction to this article, researched and written by one of our former writers about three years ago.

Painful and sorrowful, because what the pictures below show is no more.

Painful and sorrowful, because vestiges of a past embued with traditions, rooted in the very essence of our culture, have crumbled and remain only in our memory.

Painful and sorrowful, because even after reconstruction, scars shall remain on the buildings, in people’s souls, deep within the earth.

The words to come are description and ode to a town that is no longer standing, whose wonderful, timeless beauty has been defiled by the wrath of nature and the rage of the elements. Read it all, please, think about how it was and find within yourself the will to help Norcia and its people rebuilding their lives, their heritage, their past. Donate, if you can; pray, if you believe. Remain close to Norcia with your thoughts.

Help the reconstruction of the historical buildings of Norcia (the basilica of saint Benedict, the monastery of saint Benedict and that of saint Benedict “al Monte”, as well as the brewery) supporting the Deep Roots project. You can also donate directly to the Norcia municipality, via wire or paypal.

Keep updated on all official forms of fund rising by checking the Protezione Civile website and social network’s pages.

Situated in the region of Umbria, Norcia is an ideal destination for all those who’d love a holiday combining history, nature and traditional food. A typically medieval town, with a famous gastronomical heritage, Norcia is perfect if you’re seeking the aromas of the antichi sapori, old, traditional flavors.

Not far from Perugia, Nursia, as it was known in ancient times, was surrounded by Roman walls, eight sections of which are still standing. The town is historicallly connected with the figure of Saint Benedict, who was born in this very place at the end of the 5th century, and whose name is honored in the main square and basilica of the town, both dedicated to him.

Norcia is known all over Italy also for its traditional food products and it is a highly renowned destination for gastronomy. In fact, many people spending their holidays in this area see it as the right occasion to taste the food this territory offers.

Norcia is the ideal place for all those who like little towns still preserving a medieval character and surrounded by nature.

It is situated in the heart of the Parco Nazionale dei Monti Sibillini, the National Park of the Sybilline mountains, and it is beautiful all year round: landscapes in sharp contrast with each other, the valley of the majestic river Nera on one side, severe mountains on the other, come harmoniously together around the town’s perimeter.

Norcia is an ancient borgo, borough, characterized by the presence of some important monuments which have often suffered the plague and destruction of earthquakes.The artistic heart of the town is its main square: whereas most of the buildings here have been created during the Renaissance, its most characteristic one, the Basilica di San Benedetto, which according to the legend was built on the ruins of the Saint’s house, was built originally in the 12th century and its most impressive elements are certainly a sculpted rose of the winds and the friezes of the four evangelists on its façade.

The Cathedral of Santa Maria Argentea is considered the main place of worship, where is possible to find some famous Flemish paintings and the masonry triptych created by Francesco Sparapane. The Portico delle Misure is an ancient market for the trade of cereals characterized by ancient architecture. The Palazzo Comunale, the town hall, built in the 15th century, was restored in the 19th after having been badly damaged by an earthquake. In the middle of town, a monument in honor of San Benedetto da Norcia was built by Francesco Prinzi. Not far from the town centre, the monumental complex of San Francesco hosts the town library.

Norcia, though, is not only history: nature is certainly a dominant element and the town is in total synch with it. It is set into an enchanting scenery, where human artificiality has no place; all those who like walking will have the opportunity to follow some  beautiful itineraries, and being in contact with nature and animals like squirrels, roe deers and wild cats.

The norcinerie and typical food products

Norcia is associated to traditional gastronomic products, the tartufo, truffle, and local cold cuts being the most famous.

The town is characterized by the overwhelming presence of the so-called norcinerie, butcheries specialized in the production and sale of local produce, which gave it a relevant place on Italy’s gastronomical map. Norcinerie were created around the year 1200 and they are typically associated to the region of Umbria and Tuscany. They produce and sell a variety of local, succulent pork cold cuts and meats. The tradition says the job of norcino appeared in the 12th and 13th centuries and it is in this period that real confraternities were founded and new varieties of cold cuts invented.

Norcia truly is the birthplace of some of the most delicious delicatessen around. The local, genuine cuisine includes some famous products among which the most traditional are the Norcia IGP ham, lentils of Castelluccio, ricotta salata, Norcia’s pecorino, caciotta, cold cuts like capocollo and lonzino, loins, mule’s ball, boar’s sausages, farro, spelt, and black truffle.

Black truffle is certainly the most prestigious product of the area and it is known all over the country. Due to its price, it is considered the feather on the cap of local gastronomy and a lot of local street markets and events are organized in its honor.

It is not difficult to reach Norcia, as it has good road and railway connections.

By train: if you travel by train, get off at the station of Spoleto and take the bus up to Norcia.

By plane: you can fly on Roma Fiumicino, Roma Ciampino or Perugia Sant’Egidio airports: bus services to Norcia are available from each of them.

Where to stay in Norcia

Norcia is a well known location, so you won’t have any problem finding nice accomodation. If you like something truly luxurious, you could try Palazzo Seneca, which is part of the Relais and Châteaux circuit and is known to have also an amazing restaurant. If you like agriturismi better, you could go for Corte Belvoir, set in the beautiful coutryside around the town, but only 5 minutes away from its centre. If you’d rather choose a chain, pick Hotel Salicone, part of the Best Western circuit.

Where to eat in Norcia

We said good food is one of the main reasons to visit Norcia, but where should you try local cuisine? Apparently, one of the best places in town is Ristorante Vespasia, the restaurant of the above mentioned Palazzo Seneca hotel. Other excellent alternatives are Ristorante Pizzeria da Mauro, the Fiaschetteria La Crapula and the Antica Norcineria Fratelli Ansuini, whose ambience alone (think of an old cellar, with hams, salami and all you can think of hanging from the ceiling ready to be cut and eaten!) is worth a visit.

When in Norcia, it is food you want to buy: for amazing traditional salumi, try Brancaleone da Norcia, a traditional norcineria that has reached a cult status among local and tourists. If you’re after something sweeter, you should definitely try the artisanal chocolaterie Vetusta Nursia.