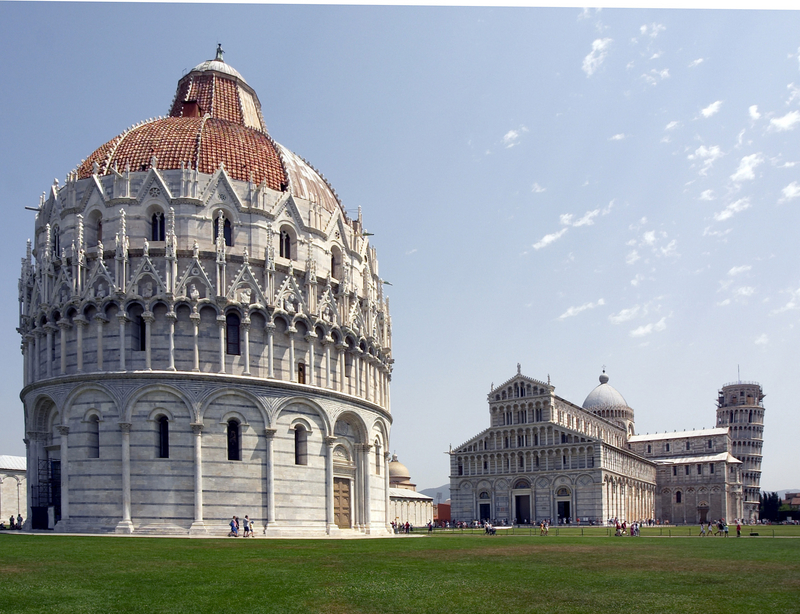 Campo dei Miracoli or “Square of Miracles,” is an apt name for Pisa’s main square. Also known as the Piazza del Duomo, the area features a large, green open space and hosts a group of marvelous monuments that are famous all over the world. The four masterpieces located in the piazza are the baptistery, the cathedral, the cemetery, and the world famous leaning tower. All of these monuments have had considerable influence on the art and architecture that followed and, because of this, the piazza has been on UNESCO’s list of World Heritage sites since 1987.

The Cathedral Square of Pisa is a large walled area located in the heart of the city and is known as one of the most important medieval art centers in the world. Partly grassed and partly paved, the area is ideal for tourists on foot, who come from all over the world to see the four major edifices that dominate the square.

Piazza del Duomo is so named because of the Duomo, or Cathedral, of Pisa that is located there. The cathedral, one of the most important monuments in the city, has been dedicated to Santa Maria Assunta. Its construction was begun by Buscheto in 1064 and completed by Rainaldo in the 12th century.

Inside the five naves are collected works of immeasurable value: paintings by Beccafumi, by Ghirlandaio, by Andrea del Sarto and by Sodoma. The mosaic in the apse is by Cimabue, the pulpit, a masterpiece of Italian Gothic art, is by Giovanni Pisano, and the central altar is by Giambologna. Finally, in front of the apse hangs Galileo’s lamp, which was used by the famous scientist to determine important laws of physics. In front of the Duomo rises the impressive circular Baptistery, with a grandiose dome, 18 meters in diameter. Diotisalvi began the construction in 1152 but it was completed only in the 14th century.

Visitors to the imposing cathedral will notice that its architecture is quite unique: it is a mix of Romanesque and Pisan style. The façade of the cathedral is made of grey marble and the white stones are set with colored marble discs. The main doors of the cathedral are quite massive and are made of heavy bronze.

In past centuries visitors entered through Saint Ranieri’s door, which was located in front of the Tower of Pisa. This door was built in 1180 and was moved from its place after the new doors were made.

While many visitors make the pilgrimage to Pisa to see the Leaning Tower, the Baptistery of Saint John should not be missed. The construction of the building was started in 1152 to replace an older baptistery; however, it was not completed until 1363.

The Architecture of the Baptistery

Designed by the architect Diotisalvi the building, at 54 meters high and 107 meters wide, is one the largest of its kind in the country. The Baptistery is a good example of the transition from the Romanesque to the Gothic styles of architecture, such as in the building’s registers. The ones on the lower side have rounded arches in the Romanesque tradition, while the upper ones have pointed Gothic-style arches.

The portal that faces the cathedral has two large columns and the jambs were made in Byzantine form. The lintel has been divided in two different tiers and visitors can enjoy its beautiful frescoes.

The sheer size of the interior of the Baptistery makes it overwhelming, even though the styling has been kept fairly simple. Noted for its acoustics, the interior lacks lavish decoration. The Guido Bigarelli-designed font at the central location of the building dates back to 1246. If visiting, be sure to see the beautiful bronze statue of Saint John the Baptist, created by the artist Italo Griselli.

The main pulpit was designed by Nicola Pisano in 1255. Few visitors to the Baptistery will ever be able to forget the beautiful scenes, like that of a naked Hercules, depicted on the pulpit.

The Leaning Tower of Pisa

The Tower of Pisa is the bell tower, or the campanile, of the city’s Cathedral. The tower is located behind the Duomo and is known to be the third most ancient structure in the Piazza. The tower was intended to be vertical, but it began leaning  after construction work began in 1173 due to problems with the foundation. The tower may be a structural disappointment, but its original form has made it one of the most recognizable of Italy’s landmarks.

Steeped in history, the Tower has had connections with many famous people and events. For instance, it is rumored that Galileo dropped two cannon balls off the top of the tower during an experiment and that it was also a Nazi lookout post during the Second World War.

During its construction, efforts were made to halt the incipient inclination through the use of special construction devices. Later, columns and other damaged parts were substituted in more than one occasion; today, interventions are being carried out within the sub-soil in order to significantly reduce the inclination and to make sure that the Tower will have a long life. In all this story it is possible to find a meaningful constant, the “genetic code” of the Tower: its continuing interaction with the soil on which it was built.

After much work to the Tower over the years, it was finally declared stable, or no longer shifting, in 2008 and is expected to remain so for at least 200 years.

The cemetery, known as the Camposanto Monumentale, is the fourth edifice in the Piazza and is believed to have been constructed on sacred soil brought to Pisa from the Golgotha in the 12th Century by the Archbishop of the city. According to various legends, bodies buried in the cemetery would be completely decomposed within a day. The cemetery is located on the site of the ruins of the old Church of Santa Reparta.

Only 84 of the Roman sarcophagi in the Camp Santo are left today, along with a large collection of urns and sculptures dating back to Etruscan and Roman times. These artifacts have now been shifted to the Museum of the Vestry.

The sarcophagi were located all around the cathedral and were even attached to the walls of the building. When the cemetery was built the sarcophagi were collected and kept in the meadow in the middle of the structure.

Carlo Lasinio was the curator of the Campo Santo and was responsible for collecting many relics, spread all around the city, in order to create a museum within the cemetery. Today, visitors can see these ancient sarcophagi within the galleries close to the walls of the cemetery.

One of the most impressive squares in the world, Pisa’s Piazza del Duomo is not to be missed.

A short distance from Florence, Pisa and its miracles should be on the schedule for any visitor to the Tuscany area.