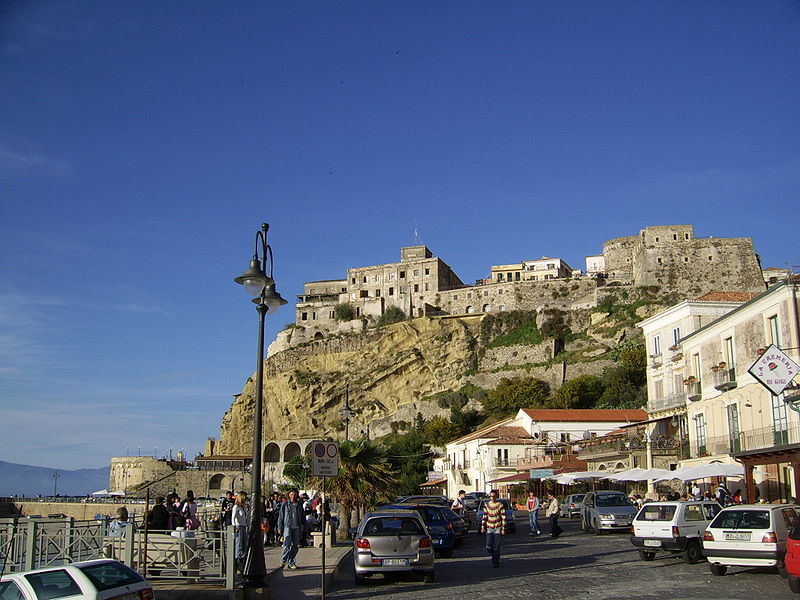 Pizzo is a small comune and port located in the Calabria region of Italy in the province of Vibo Valentia. The town is located on a steep cliff overlooking the gulf. Pizzo is spread over an area of 22 sq km and has a population of approximately 9000. The economy of the town is based on fishing for coral and tunny.

It is sometimes known as Pizzo Calabro (U’ Pìzzu in the local dialect) and is a well known holiday destination for the locals from the surrounding towns. The historic center of the town is located on top of a cliff and the newer sections of the town have developed on both sides on the seashore.

There are not many sightseeing attractions in Pizzo, the main attraction is the shore line which is marked with several high cliffs and beautiful clear waters. Except for that there are only a few places to visit within the town.

Piazza Della Repubblica is the main piazza in Pizzo. The piazza is surrounded by several beautiful buildings and the lanes leading from the piazza are lined with several beautiful ancient houses and small villas. The main tourist information office is located here and there are several shops and ice cream shops as well as some cafes located close to the square. During the summer months most visitors can be seen strolling around leisurely in the piazza and the locals are seen most days in the evening.

Like in all towns in Italy, the historic center of Pizzo is one of the most interesting places to visit. Perched on top of a high cliff, this part of the town has several old buildings and shops lined next to each other. There are several small charming houses and everywhere locals can be seen chatting up with each other.

One of the most interesting places to visit in Pizzo is the Chiesetta di Piedigrotta which is a small chapel located inside a cave. The chapel is located along the coast a little away from the main town. The tickets can be bought from one of the bars that are located on the road leading up to the chapel. The church is located a flight of steps down from the main road and dates back to the 17th century. The cave was dug from a soft rock on the bank that faces the sea. It is believed that the chapel was made by shipwrecked sailors who had survived a violent storm and built the chapel as their gratitude. The interior of the cave has several beautiful carved statues. These ornamented statues were carved from rocks by a local family much later, in the 19th and 20th centuries. The chapel is known to be one of the most visited places in Calabria.

Castello Murat is the historical castle of Pizzo which was built in the 15th century. The castle is mostly known as the place where Joachim Murat, Napoleon’s brother in law was executed. The castle mostly hosts various public events in the town and is open to visitors.

The seaside promenade of Pizzo is the small harbor of the town. The promenade is located down the hill from the castle and there is a small stretch of beach located in this area. There are also a few more beaches located on the other side of Pizzo.

The nearest airport to Pizzo is located half an hour from the town, Lamezia Terme. Pizzo is also connected by trains which run along the route of Costa degli Dei through Tropea. The train station is located 25 minutes from the center of the town and trains leave hourly from the coastal towns for Pizzo. Visitors can also travel by the state buses that operate in Calabria and connect the town to several cities and towns in the region.

Pizzo is not a very large town and there are only a few places to see while visiting. The main attraction is the historic center of the town which is perched on top of the hill. Visitors can easily explore this part of the town on foot within an hour. The climb up is steep and the streets and the alleys are very narrow in this area. The newer sections of the town are located along the sea coast. Visitors can also use the local buses which have several stations in the area around Pizzo. Visitors who have their own cars can drive down to the neighboring towns; however, within the town cars would not be needed.

There are several good accommodation options in Pizzo, mostly because it is a popular holiday destination for the locals from the surrounding regions. During the summer months, plenty of visitors from all parts of Italy as well as from other countries visit the town. Most hotels are located along the sea coast and offer good views of the sea. Some of the best known hotels in the town are Hotel Grillo, Hotel Marinella, Hotel Murat, Hotel Garden Club Calabria, Hotel Garden, Il Giglio Residence, Hotel Sonia, Hotel Bravo Club Pizzo and Grand Hotel Esperia.

Pizzo has plenty of good restaurants and pizzerias for visitors to choose from. The town also has many good cafes and bars as well as gelato shapes. One of the most famous things to have in Pizzo is the tartufo di Pizzo which is a delicious chocolate ice cream with hazelnut. The ice cream is in the shape of a sphere and has melted chocolate fudge sauce inside. The ice cream is then coated with powdered sugar and cocoa. The dessert is highly popular not only in Pizzo but also in many other parts of southern Italy. There are several cafes and ice cream shops in town that serve this local specialty.

There are a few good souvenir shops in Pizzo where visitors can find local handicrafts.

Why is Pizzo considered to be an artist town?