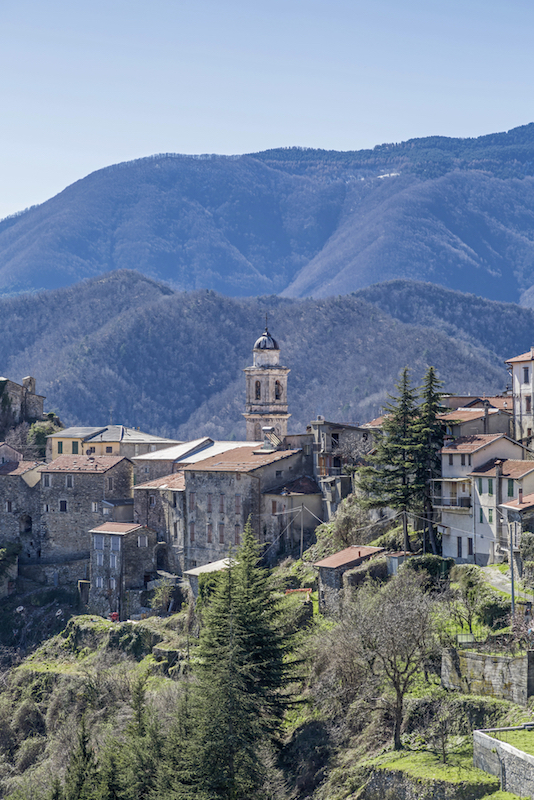 Triora is a small village located in the Liguria region of Italy in the province of Imperia. The village is close to the cities of Imperia and Genoa and is on the border with France. Triora is known as the Village of Witches, as it was see of some of the most gruesome witch killing in Italy, during the Renaissance.

The village is located in the Valle Argentina and was heavily destroyed in 1944 by the Germans. The destruction caused the fleeing of many inhabitants of the village. After the recostruction, Triora is now a small, quaint and quiet town with a population of just 416.

The Cabotina in Triora is an interesting place to visit. It was here that the young women and girls of Triora had ventured to in the dead of night, leading to the events that caused the infamous witches’ trials of Triora. The building is in ruins now but it still evokes an aura of mystery.

Monte Delle Forche, Gallows’ Mountain in English, is a beautiful place to visit. From the top of the mountain one can get a good view of the village and also of the surrounding areas.

The collegiate of Triora is one of the most interesting religious places to visit in the village. The collegiate has a beautiful architecture: the most interesting feature of the building is its large gothic bell tower. Inside the church are several valuable artworks and decorations. The most noteworthy is the Baptism of Christ which dates back to the 14th century, painted by Taddeo di Bartolo, a Sienese artist. There is also a beautiful panel painting dating back to the 16th century.

The Oratory of Saint John the Baptist

The oratory of Saint John Baptist is a typical village oratory. Inside the building the most noteworthy feature is a wooden statue made by famous Ligurian sculptor Antonio Maragliano between the 17th and 18th centuries. Other than the statue, there are also a few other beautiful decorations.

The church of San Bernardino is one of the most interesting places to visit in Triora. The rural church was originally built in the 12th century and has been declared a national monument because of its history and its beautiful architecture. The church has various beautiful 15th century frescoes and an interesting Last Judgment. Most of the frescoes have been attributed to the Priest Giovanni Canavesio of Pinerolo.

The witch hunts of Triora

At the end of the 16th Century the region was hit by the plague, acid rains and herds were dying. Today we know that the famine was probably due by an economic operation of the land owners, but at the time the inhabitants of the region wanted a scapegoat. Unable to find a solution, women were accused of all the bad things happening; some were also accused of cannibalism and infanticide. Between 1587 and 1589 forty girls (one was 13 years old) and one boy were accused of witchcraft; some died under torture, others were burned at the stake. Documents of the trials can be found at the Archivio di Stato in Genova.

Triora is located close to the cities of Genoa and Imperia, so getting down to the village is fairly easy. Genoa is well connected to all major destinations in Italy as well as in Europe through flights and train network, so the easiest thing to do would be to first reach Genoa and from there travel to Triora. Plenty of buses and taxis are available at the Genoa airport. Visitors can also travel by state buses departing from the main bus stations of Genoa, Imperia and the other locations of the province to Triora. Tickets are not very expensive. The easiest thing, however, remains to drive down to Triora since the road leading up to the village is quite picturesque.

Triora is quite a small village and is considered one of the most beautiful “borghi” of Liguria. Visitors can easily explore most parts of the village on foot. Those with their own cars can explore the neighboring villages and the surrounding landscapes. However, within the village the best way to explore is by walking around its narrow streets and alleys.

Triora is quite a small village so there aren’t many accommodation options available to visitors. There are only four to five hotels and Bed & Breakfasts in town where visitors can stay. Most visitors prefer to stay in Imperia, since there are more options available there. There are a few farm houses and traditional old houses which can be rented by visitors if they plan to stay longer in the region. There are three, well known hotels in the village: hotel Colomba d’Oro, II Poggio hotel and B&B La Tana Delle Volpi.

Eating out in Triora can be quite enjoyable because of the rustic country style dishes typical to the village. Triora is known for its various alpine cheeses and its bread. The local dishes are ravioli with meat, tagliatelle, gnocchi, bugaeli, ciapazoi and sugeli along with a lot of other typical dishes. Some of the best known restaurants in th village are L’Erba Gatta, ristorante Loreto, Ca’ da Roca and Ristorante II Poggio.

Triora has several small shops where visitors can purchase a variety of local products. The village is mainly known for its bread which is round in shape and is considered to be the main product of the village. Triora also has a variety of alpine cheeses for which it is quite famous. The bruzzo is the best known cheese of Triora which is one of the oldest types of cheeses in the Valle Argentina. The cheese is made from ricotta which is then naturally fermented. The cheese goes well with all types of pasta and even with tomatoes and fresh bread. Plenty of food stores in the village sell these local cheeses. Triora is also known for its honey, chestnuts and its various mushrooms, particularly porcini and cicotti. There are also quite a lot of good bakeries where visitors can purchase traditional pastries and cakes, savory and sweet. The best known cakes of the area are crostate, jam tarts. Famous are also canestrelli cookies.