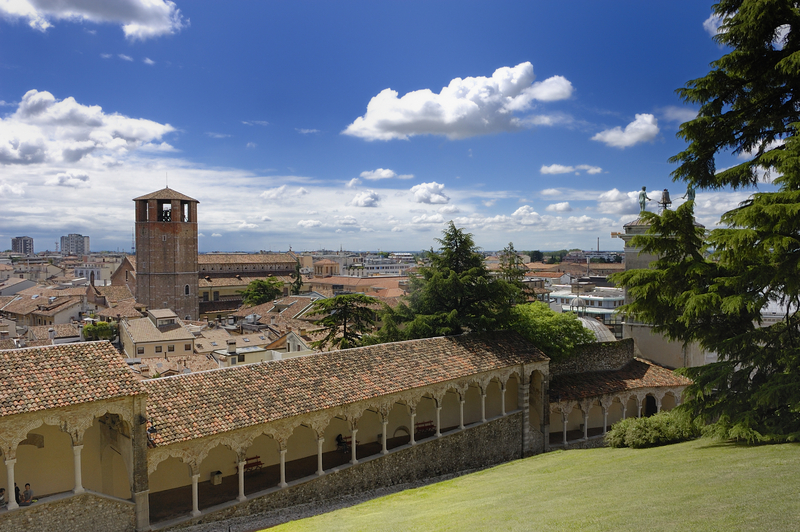 Udine is a city located in the region of Friuli Venezia Guilia and is situated quite close to the Slovenian Border. Udine has a long history that goes back to centuries. Although the name of Udine is first mentioned only in 938 AD, it is believed that the city had been inhabited since Neolithic ages. In 1223, Udine became the seat of the Patriarch and the most important center for trade and commerce in the region.

As of 2018, the population of Udine was 99,500 people. The city is a peaceful place, and one with much history which is very well reflected in several aspects of the city’s culture.

The Palazzo Patriarchale was built in 1517 in place of an older palace as a residence for the Aquileia family of Udine. The Palazzo was originally used as a private residence and during the rule of the Austrians it was used as a prison. The palace is now open for the visitors to explore and is one the most important landmarks in the city.

Church of Saint Mary of the Castle

The church of Saint Mary of the castle is believed to be the oldest existing church in Udine. The architecture is particular to the Lombard era and had to be reconstructed several times over the centuries. This is one of the most interesting churches in the town.

The main Square in Udine is the Piazza Della Libertà. This is also one of the most beautiful squares in the city. Several important buildings and monuments are located around this Piazza, including the Town Hall, the clock tower and various other important monuments.

The magnificent building of Loggia Del Lionello houses the Town Hall of Udine. The town hall is situated in Piazza Della Liberta and was originally built around 1448. The architecture of the building is Venetian gothic style with beautiful attention to detail. Opposite the town hall is a clock tower that was built around the same time and renovated several times later.

The Cathedral or Duomo of Udine is a very handsome and imposing structure. The construction of the cathedral began in 1213 and several major changes were made to the structure later on. The interior of the cathedral is completely baroque and has several important art works from popular artists. The bell tower of the cathedral is also quite magnificent; the first floor has a chapel that is adorned with several beautiful frescoes.

The Venetian Castle was built in 1517 and is located in the center of the town. The castle was built in the location of an earlier castle that was built here during the Lombard times. Currently the appearance of the castle is renaissance due to several renovation works done and it houses the Parliament House which is the oldest one in Europe.

Via Mercatovecchio is the main street in Udine and is one of the most picturesque too. The cobblestoned street is lined with beautiful buildings, villas and shops.

Udine is well connected to the cities and towns in the Friuli Venezia Guilia region. There are frequent trains that connect Udine to other towns in the province like Osoppo and Tarvisio and to the other destinations in the region like Gorizia, Grado and Pordenone. The trains are quite comfortable and due to their frequent runs between the cities they remain highly popular among the locals. There are also a few buses, regional and some private buses that run between the towns of the province. Visitors can also drive down to the town from other provinces.

There are a few options available to visitors for moving around the city. The first option is to use the public buses that cover most areas of the city; these buses are fairly punctual and inexpensive. Another option is to take a taxi but these are a little expensive in comparison to the buses, better to use your own car if you have one since parking is not usually a problem in most parts of the city. Many visitors also rent scooters and bicycles or explore most parts of the town on foot which is also a good idea.

Eating Out in Udine

Udine mostly has restaurants serving Italian and regional cuisine, however, there are a few restaurants especially in the bigger hotels that serve international cuisine including continental, American and cuisines from other European countries. There are also a few pizzerias in the city as well as one or two Japanese and Asian restaurants, but its best to stick to the Italian cuisine. Some good places to try Italian food are Trattoria al Paradiso, Pepata di Corte, Levade, Pizzeria ala Lampada, Grani di Pepe, II Ristorantino and La Dal Cont.

Udine has a few commercial shopping complexes and large malls where you would find almost anything that you need. For those who are looking for some more traditional shopping, there are quite a lot of shopping streets in the city that sell locally made clothes, lace, woolen clothes, cashmere as well as pottery and handicrafts. Udine is also a good place to purchase wines and there are plenty of good places in the city where visitors can find some great Italian wines. Cheeses are also quite here, and the open air markets that are held are quite interesting.