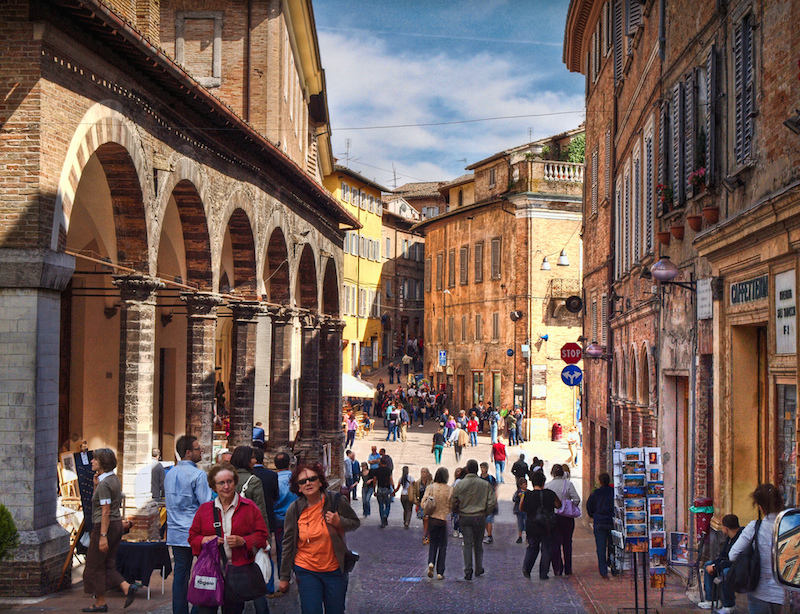 Urbino is a walled medieval town in the Marche region and, together with Pesaro, it’s the capital of the Pesaro-Urbino Province.

Built on top of two hills, the area is considered at medium-high seismic risk.

The town was known as Urvinum Metaurense in Roman times, and it became an important centre during the Renaissance in Italy. Federico da Montefeltro, Duke of Urbino from 1444 to 1482, is the ruler that more than any other contributed to the formation of the town as we know it today. During his reign,the town reached its greatest period of artistic splendour and the medieval residence of the Montefeltro was expanded and embellished to become the Ducal Palace, the main attraction of Urbino.

Urbino is the birthplace of Raffaello Sanzio, one of the most famous italian painters, and the house where he was born is now a museum.

Since 1998,  Urbino has been part of the World Heritage Sites by UNESCO. It’s one of the most renown touristic destinations in Italy thanks to its history,  monuments and works of art.

On the third week-end of August,  Urbino celebrates the Festa del Duca, an historical re-enactment through the streets of the town, with acrobats and fire-eaters, that terminates with a tournament held in front of the Ducal Court.

The Palazzo Ducale is the main attraction of Urbino. Built in the second half of the XV century by Federico II da Montefeltro, it’s one of the best examples of Italian Renaissance architecture. This magnificent architectural masterpiece, with its twin towers (the Torricini) and a fabolous courtyard, now houses the National Gallery of the Marche, that exhibits important works of Renaissance art. The most important artists on display at the Gallery are Raffaello, Van Wassenhove, Tiziano, Piero della Francesca and Paolo Uccello.

The Courtyard (Cortile), designed by Luciano Lorana for Federico da Montefeltro, is considered one of the finest examples of Renaissance architecture.

The original building (built in 1021) had a renaissance style, but it was rebuilt in neoclassic style by Valladier after the 1784 earthquake. It is the seat of the Archbishop of Urbino-Urbania-Sant’Angelo in Vado, and displays the famous Last Supper by Federico Barocci. The church is dedicated to the Assumption of the Blessed Virgin Mary.

This beautiful building is one of the most important in town. It was built in its actual shape at the end of the XV century. It now houses the Istituto Superiore per le Industrie Artistiche (a school of art).

The Ducal Stables (also called Data) could host up to 300 horses. Together with the Helical Ramp, were commissioned by Federico di Montefeltro as an annex of the Ducal Palace. The semi-cylindrical spiral ramp was built in the XV century by Francesco di Giorgio Martini, and it was meant to guarantee a way for the duke to easily reach the Ducal Stables from the Palace. The stairs go from the Mercatale to the Theatre at the feet of the “Torricini”, the leads to the Ducal Palace. After a period of abandon and neglect, both stables and ramp have been undergoing renovation works for the past few years.

The Church of San Domenico, built in travertine stone, has a beautiful portal with a lunette by Luca della Robbia. It was built between 1362 and 1365 upon request of the Dominican Order.

The medieval church of San Francesco has a gothic bell tower and a great altar-piece; it was originally built in the XIII Century but was greatly modified in 1742. The Chiesa di San Sergio, in via Raffaello, built in Byzantine times, was the first Cathedral of the town.

This square is at the entrance of the Ducal Palace and one of its sides is fully covered by the palace. It’s the heart of the town, the point around which it developped.

Being the most easily accessible square in town, Piazza della Repubblica is the centre of the social and economic life of Urbino. From this square the four most important roads of town (via Raffaello, via Veneto, via Mazzini and Corso Garibaldi) depart.

“Gioco del pallone” used to be played on this square. Gioco del pallone was a ball game from which the square took its original name, Piazza del Gioca Pallone. At the beginning, in the XVI century, the game was similar to “Calcio Fiorentino” (Florentine soccer), but from the XVIII century it started to resemble to the “Pallone col bracciale”, a game that, until 1921 was considered the main national sport in Italy, and whose professionals were between the best paid in the sport world (with japanese sumo wrestlers and spanish toreador). From this game was born the tamburello.

Urbino has various interesting and beautiful palaces. Palazzo Albani, where Pope Clemente XI was born, is a beautiful building rich in frescoes and stucco that today hosts the University of Urbino. Palazzo Bonaventura Odasi is now the town museum. Palazzo Veterani hosts part of the University areas.

The Albornoz Fortress (not to be confused with the Albornoz Fortress in Narni) is a defensive fort of the XIII century that today houses a Museum of Arms and Armors. From here, you can get an amazing view of the town and the nearby countryside. It houses various events during the Summer.

How to get to Urbino

The closest airports are Bologna (2 hrs by car), Ancona, Forlì and Rimini.

If you arrive by car from the North, on the Highway A14 Bologna-Taranto, you should exit at Pesaro-Urbino and follow the SS423 to Urbino (about 40 minutes from the highway).

From South-East (Ancona), on the Highway A14 Taranto-Bologna, exit at Fano and follow the SS3 Flaminia towards Rome; when you’ve passed Fossombrone Ovest, turn left on the SS423 to Urbino.

From South-West (Rome and Perugia), take the SS3 Flaminia to Fano,  exit at Furlo and Calmazzo and follow the SS423 to Urbino.

From West (Florence and Arezzo), take the E-45; after the exit San Giustino, take the SS73 bis towards Urbino and Urbania.

There isn’t a train station in Urbino. If you travel by train, you need to get to Pesaro (if you come from Bologna) or Fano (if you come from Ancona) and take a bus to Urbino. In Pesaro the bus station is next the train station and buses depart every hour. From both Pesaro and Fano the bus ride is about 40 minutes. Coaches also depart from Rome, Arezzo, Ancona and Pesaro to Urbino.

There are some very good hotels in the town centre of Urbino. Albergo Italia is in a historic building in Corso Garibaldi. Hotel Raffaello is also in town and is listed in the Red Michelin Guide. Hotel Mamiani is outside the city walls but it has a spa, a solarium and it’s pet friendly. The countryside surrounding Urbino is beautiful, so if you have your own car or don’t mind hiring a taxi, you should consider staying at the Country House Ca’ Virginia, a farmhouse of the 14th Century.

Where to eat in Urbino

Urbino is a very touristic town, so you can find fast-food (panini and pizza al taglio) almost everywhere.

If you want to try the local specialties (included the truffle), you should go to Tartufi Antiche Bontà in Via Raffaello where for a good price you can have a “tagliere”, a degustation of local cheeses and salami (it is also a shop). On a side street of via Raffaello is Antica Osteria da la Stella, that serves excellent food and wines. For the best patisserie, visit Cornetteria Peccati di Gola, in via Mazzini 28.