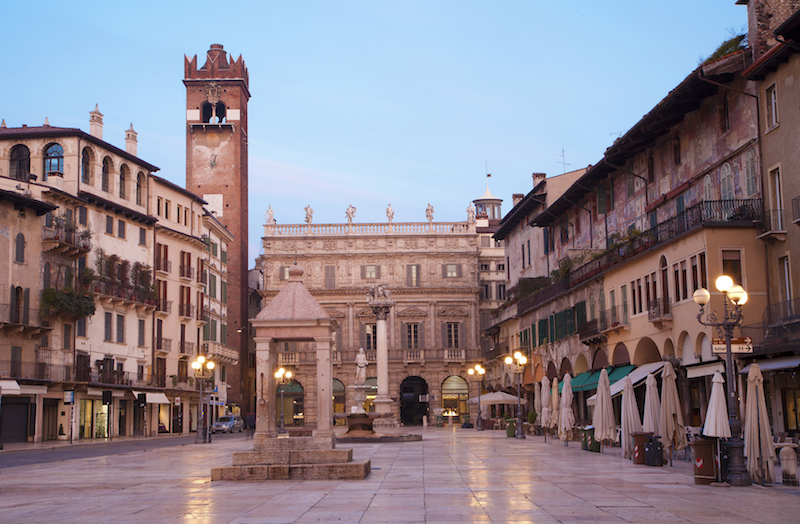 Verona is a city located in the Veneto region of Northern Italy. It is the capital of the province of Verona and one of the most important tourist destinations in the northern region because of its many annual fairs, shows, operas and its artistic heritage. The city is famous mainly as the setting for Romeo and Juliet of Shakespeare.

Because of its strategic geographical location, the city has always been of a considerable economic and historic importance. The city is located close to the Lake Garda in a loop of the River Adige. Because of this it had often been a victim of floods till 1956 when a tunnel had been constructed here.

The Arena is a large beautiful Roman amphitheater which is still used today. It had been built in the 1st century and is the third largest amphitheater in the world still surviving today. It hosts many events, like concerts and opera.

One of the most popular sight seeing attraction is Juliet’s House, with its famous balcony. Couples and tourists from all over the world visit the location though there is no real connection to the story of Romeo and Juliet.

Castelvecchio is a large fortified castle which had been built in 14th century in red bricks on the banks of Aldige River. The main building is now home to the art museum that has a very good collection of paintings and sculptures.

This is the center point of the city and was the Forum during Roman times. The beautiful fountain of Britney Verona, the Gardello Tower and a large market are located here.

The tower had been built in 1463 and is the tallest in the city. The beautiful clock tower stands high over the piazza and there is a palace courtyard through which visitors can enter.

The Duomo or the cathedral of Verona had been built in the 12th century over the remains of an old 8th century church. The cathedral has a beautiful Romanesque architecture which had been designed by Nicolo. The stone reliefs in the building have Biblical scenes. The smaller door on the side has beautiful medieval carvings. Inside the cathedral are gothic decorations, paintings and other art works.

The Basilica of San Zeno is located a little away from the center of the city. The basilica has the richest artwork and preservation in the city. It has been dedicated to the patron saint of Verona, Zeno. The tomb of the saint is located in a beautiful shrine in the undercroft of the church and there is a large statue of the saint in robes. The basilica has a beautiful Romanesque façade which has been designed by Nicolo. It has been an important center for pilgrimage in Europe since centuries. There are beautiful frescoes inside the basilica but unfortunately they have been damaged by tourists who have left their graffiti and signatures everywhere, including the Austrian armies.

There is an airport in Verona which is located around 12 km from the main city. Several budget domestic airlines serve the city’s airport. Visitors can also travel by buses to Verona from various locations in the region. The state buses that operate in the region leave every few hours from the main towns and cities in the region. There is also a train station in Verona where many trains from Milan and Venice reach every day. From Milan the journey would take around one and a half hours, from Venice the distance to Verona is the same. There are also trains for Verona from Bologna, Treviso and Munich.

Verona is spread over an area of 206 sq km so it is quite a large city. However, moving around within the city is not very difficult since there are plenty of ways in which it can be done. The center of the city is easily accessible on foot since it is very picturesque and is surrounded by beautiful buildings on all sides. Other than that, for visiting the other areas of the city visitors can use the public buses which are used by the locals for commuting to the different areas of the city. Those who have their own cars can also drive around (not in the town center though). Taxis are available, but they are not very commonly used.

Every year millions of tourists visit Verona for its beautiful architecture and its rich culture. So there are plenty of good accommodation options available in Verona in all price ranges. It is important to get the bookings done in advance especially when the annual opera performances in the arena take place. There are a few luxurious hotels like Accademia and Due Torri in the city and many small holiday farms and B&Bs. There are three good youth hostels in the city close to the train station. Those who prefer can also stay at a campsite called Campeggio Castel San Pietro which is located in a very beautiful location.

There are several good restaurants in the city where visitors would be able to find some local specialties like horse meat and casoele, which is a pork casserole, bollito misto and mostarda. Some of the best restaurants in Verona for traditional food are the Armoured Car and Al Duomo.

Via Mazzini is the best place to shop in Verona. The street stretches between Piazza delle Erbe and Piazza Bra. There are plenty of good shops in the area including most Italian labels which can be quite costly. Corso Porta Borsari is also a very elegant shopping destination in the city. There are many good traditional shops on the street selling traditionally made paper, elegant pencils and pens. Corso Santa Anastasia is the best place for those who want to purchase great local antiques. There are many narrow streets in the area that are lined with vendors selling all kinds of authentic antique masterpieces.