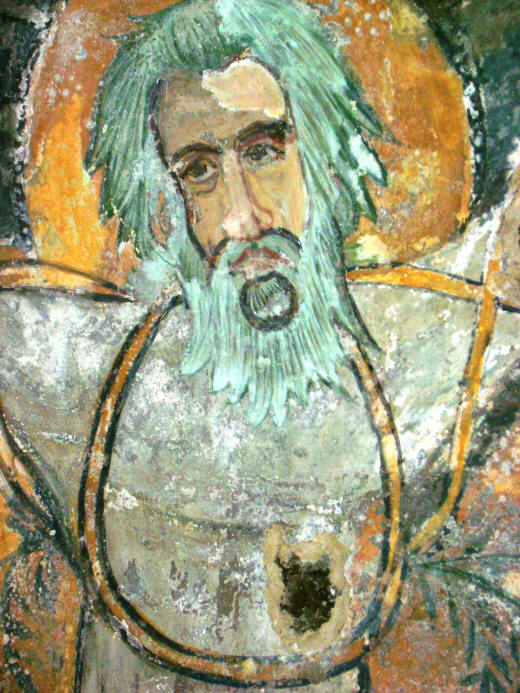 Continues from What Lucania kept hidden part I

A short passage to the church of San Biagio reflected a continued military-Templar presence. The odd part was that as much as theses places were similar, they possessed symbols that came from left field, as though thrown in on a whim. San Biagio church was odd in this way, not only, it was masked up (like many of the others), like the symbols and ancient expressions hidden in caves. Frescoes were plastered up behind false walls and cheap tasteless flooring covered the original in San Biagio Church. Maybe they never intended on having someone construct a puzzle from the pieces, and somehow I think they may have been excessively ignorant at the time.

San Biagio now has exposing holes in its cheap yellow plaster, and what did we find behind them? I saw the vague image of familiar colors; it then hit me: the colors, the style, the time period was the same, the same as the others we saw in Melfi. There was an entire wall placed over an obvious cupped out part that is now exposed: someone had smashed a hole in it. I wondered why they hid other rooms and sections in this church. The original flooring is three feet underneath the present one. And what’s even odder is the sign in the front of the church stating that the church was built in the 17th century. Glancing back at the fresco hidden behind plaster, I couldn’t envision it being built in the 17th century.

The frescoes were created in the 12th or 13th century. I cannot fathom why they’d claim such nonsense, and make such an error in the date, an error of four or five centuries! It’s clear they’ve investigated; I witnessed the holes in the floor and walls. Therefore, the churches hidden parts proved a much older history, so why didn’t they change the date on the sign? The further oddities of this church are the two identical altars that face one another. This is not acceptable by Christian standards as far as I know, yet it was left in this same “eroded” state. They may have been divided at one time, because I saw large stones laid from wall to wall in the flooring which formed a wide line.

This could have indicated the presence of a former structure like a wall, which could have separated the altars. It’s even stranger that they took it down, which meant now the altars would stand face to face.

We traveled back to Acerenza to investigate its cathedral, the one we had almost made famous (if only the residents would believe us).

This cathedral struck me as a castle towering over the village, or better, a church-castle, with double functions. It could have been a fort made to take on a church appearance, used for protection, or for storing valuables. Or it could have been used as a church for spiritual reasons and protection, or as a cover up for being a castle. At this point many angels are sitting on our shoulders telling us different things. There’s a complete hallway shaped into the letter C which wraps around behind the altar, a hallway around 15 ft in width and with a 30 foot ceiling.

It’s here in this hallway where I was introduced to Saint Canione or rather, his “Shepard’s staff.” Underneath his statue lay a stone-carved casket with a small window, that you could peep through and partially see the tip of a cane. I saw the bottom half of this wooden stick, it was the color of a light-stained bamboo. The young Italian woman of Norman ancestry explained to me that this stick moved on its own. Moved? It rolled back and forth by itself-moving closer to the tiny window even enough to touch it, and then back again. Some people had seen this happen, while others witnessed its location change when they returned some five minutes later. Not a soul was present when it happened, and it couldn’t of been moved by an outsider – it was glassed in.

If it wasn’t for the arranged private tour, I would have sat there until I myself saw this stick move. The same C hallway symmetrically wraps around a tomb in the crypt downstairs. It’s directly under the other one, only smaller in size. This miniature C hallway tunnels around that tomb, only that now, it’s a solid hallway. It had been walled up by someone in the 16th century. The thought occurred that someone may have desperately needed to hide something of value here, or had stashed something during a time of invasion, but it’s never been reopened since.

There was no hiding of their strange pagan carvings in the cathedral, many of which were carved into the lower halves of columns in the crypt. To this day not one person has noticed nor questioned this opposition to the Catholic faith. They still hold masses there regularly; these faithful haven’t yet realized they praise God upstairs and down below pagan creatures lurk on dark stones. A skull and bones represented one of these I have been told that this was normal, and used in the Catholic Church to represent death, but this is the only oddity that I’ve been able to justify.

When we came to the grotto of Saint Margaret on our trip to Oppido, I realized that this grotto was a “church-grotto.”

We had just walked into another peculiar church. Similar frescoes waited behind bars still intact on the cold walls. There they stared back at us, as we marveled in their antiquity. The unusual circumstance cut our visit to a short; millions of gnats were using the frescoed walls as a refuge from the scorching August heat. The frescoes literally turned black in spots and as we stayed looking and shooing them away, we only found that our noses were engulfed with black critters, just then, we made our minds up to flee! Meanwhile, I walked out to have a look at the attached grotto while Rafaelo fought the gnat clusters, struggling hard to lock the doors.

I had this burning desire to fall on my knees and start digging into the soil with my bare hands – I had just wanted to dig and dig, my curiosity was killing me. We could unravel more truth and discover what was underneath the first floor of that solitary structure. I stood in the cove of two rounded circular patterns; it was as if the ceiling itself possessed two huge bulging eyes. There was an entrance as a hole in the ground to the right, and surely with stairs now covered up, this meant there were other levels beneath this ground. These places desperately need to be excavated.

The entire area of Potenza was strategized into perfect escape routes, fortresses, underground residences and passages, yearning to be tampered with. I’d love to expose these, for the beginnings of a marvelous discovery.

Clues of a mysterious population came with the wind, who delivered these-free of charge. Knowledge was harboring in these areas, and we were trying to detect it. One thing is for sure: they were a secretive people. Clues were readily available as we passed by doors; some doorways had carvings around them of the saints we found inside these mysterious grottos. We descended through tight alleyways; and were standing on a mysterious clue, well I was-a piece was resting under my foot. I bent down to pick up a triangular shape, which was a thick layer of cooked clay painted on one side; a plate from a medieval time, no longer of use. But yet it sat there in obvious view, undisturbed in this place where no one crosses anymore.

The story we are working to piece together is a combined mish-mash of tiny towns within the Potenza province in the region of Lucania-Basilicata, and each one began to take on a similarity with another. We trespassed across one town and snuck into another and I sensed their uniqueness and individuality right away; each was different, yet confessed their correlations. The towns could be described as strangenesses of tastes, symbols, and hidden grottoes baring cousin decors of the same period in time.

The Lucanian people maintain an indifference to these 900 year old frescoes– which give pigment to the neglected caverns. Out of ignorance, farmers made use of them for housing pigs and livestock, burning fires inside them for warmth, and ruining vital evidence to a medieval people’s existence during the 12th and 13th centuries.

Even during my journey in Lucania, priests made jokes about Templar talk: “No, there were never any Templars here; (chuckling) maybe they crossed Acerenza’s path once.”

“Ah, come on, this guy knows all there is to know about Acerenza’s history (priest looking at the guy to his right) and he says it’s never been trampled on by one Templar boot.” 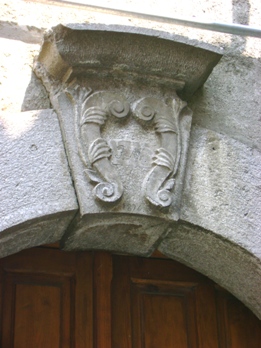 This was spoken to me as I sat next to this priest on a bench; we were facing the Acerenza Cathedral-whose wall was slashed with a Templar cross. Either they do know something about the Templar’s history in Acerenza and are reluctant to talk about it; or they are cunning like their ancestors, who masterfully side-stepped the facts and presented them as “unimportant,” or they are plain blinded to the obvious clues sitting right in front of them. For people that were known to pass on news like gossiping gazettes- this topic strangely ever made it past a joke. Their deeds of honor were done; they hushed it up and left it for-forgotten once again.

We walked on, and images began to click into sequence. The grottos were set away in solitary spots, frescoes positioned and styled by the same hands-the same imaginations (the time period locked into the 12th century for the most part), odd statues were found all over the place that somehow were surely connected. Pagan symbols were outrightly noticeable by eyes that can “see” them.

So, this concludes my first journey into the Lucanian territory. I imagine if we’d spent more time there, like a month or more, we could have unraveled more of the “unexposed” which awaits down beneath. We hope one day to link together many of the coincidences-besides the oddities that have nothing in common whatsoever. We hope to tie them all together, and create a legit story, consistent and complete.

This trip was meant for gathering useful information that we can record, to help our story grow. The experience assisted me with understanding, and each time (so they tell me) they are presented with something new. This time that something new was a baphomet. In a cemetery set near Serra di Vaglio the baphomet of St. Bernard was found (the town of the ancient Lucanian village) and in my opinion and Raphael’s the other (of the strangest findings) was the figure of a Martian found in the Melfi Castle’s museum. It was a figure whose image we had to battle over to take, and difficult in persuading the employees. A Lucanian Martian stood behind glass. This Martian we saw was crafted more than 2,500 years ago, how is this possible? Maybe Martians are not relatively new after all. Mystery after mystery, Basilicata never lets its visitors down; it always has another story to share. It probably always will have more to tell.