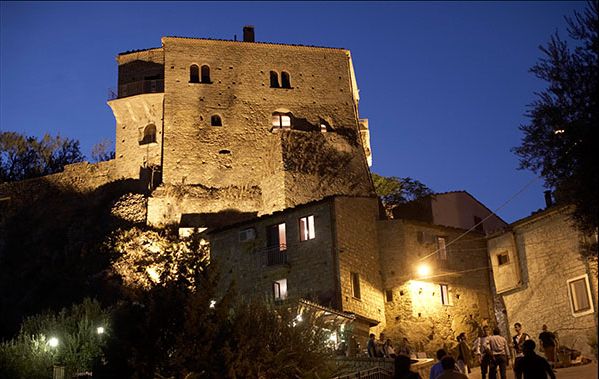 Valsinni is a small commune and a town located in the Basilicata region of Italy in the province of Matera. The town of Valsinni is divided into two different parts. First, the ancient town is located on top of the hill and the newer town is located a little further down in the valley.

The town has a history that goes back centuries. The remains of an Acropolis were found on Monte Coppolo as well as an ancient city wall. It is believed that the town was first founded by the Lucani in the 4th century BC and remained an important center till the 14th century.

Valsinni has been ruled by several different families through the centuries, the Sanseverino, the Prince of Salerno, the Vivacqua, and then the Morra family. Isabella Morra was a poetess born in the ancient castle in Valsinni and was killed by her brothers. The famous archeological site of Monte Coppolo is located close to Valsinni and has been considered an important archeological place of interest. The Pollino National Park is also located close to Valsinni. The town of Valsinni itself can be actually called a village; it is spread over an area of just 36 sq km and has a population of only 1700. The economy of the town is based mainly on agriculture and livestock breeding.

The Castle of Valsinni, Basilicata

The castle of Valsinni is the main attraction for tourists that come to town. The castle was originally built in the 11th century. It is located in the older part of the town on top of a hill and dominates the surrounding regions. The poetess Isabella Morra was born and died in the castle. All the medieval streets in the older section of the town had developed around the castle and the structure still stands unharmed today. Except for a few renovations, much of the original castle is still intact.

Palazzo Mauri in Valsinni is an interesting monument to visit for two different reasons. The first being that the palace has beautiful architecture, although smaller in size. The second reason for visiting the palace is the presence of the Mauri mill. Valsinni has been famous for centuries for its mills, and plenty of well-known millers have lived in Valsinni. The Mauri mill in the palace is a symbol of its tradition and is a must-visit in Basilicata, Italy.

Chiesa Madre is the mother curch of Valsinni. The beautiful church has been in Valsinni since the medieval ages and has been an important religious center in town. Renovations and repair works have been done several times in the centuries that followed but the church still retains several medieval influences.

Chiesa Della Annunziata is another important church in Valsinni. The church was built in the 17th century. The interior of the church is elegantly decorated with a beautiful altarpiece and few artworks.

Getting down to Valsinni can be a little tough, mainly because there are limited transportation facilities in the area. The towns of Potenza and Matera are located close to Valsinni so the best way to travel would be to get a State bus from the main bus stations in these cities. State buses in this region are quite comfortable and quite a lot of buses depart for Valsinni every week. Tourists who have their own car or have rented one can also drive down to Valsinni from Matera, Potenza, or from the other towns in the region.

Valsinni is a very small town. Except for the castle and one or two churches, there are not many places to visit in Valsinni. The easiest way to explore the town is on foot. The locals can be seen strolling around the streets and the small piazza in afternoons and in the evenings. The streets here are quite narrow and mostly traffic-free so walking around is easy. The streets in Valsinni are lined with beautiful old houses in pastel colors, the most enjoyable thing is to just walk through the different quarters of the town and experience the village-like atmosphere.

Valsinni is very small and visitors hardly ever spend the night in town. For this reason, there aren’t any hotels located in Valsinni, except for one or two local houses that offer rooms on rent to tourists occasionally. Most tourists only visit Valsinni for a day and stay in hotels in the nearby towns. Most good hotels in the province are located in Potenza, Nova Siri, Colobraro, Nocara and Neopoli. Visitors can stay in a hotel in these towns and drive down to Valsinni during the day to explore its attractions.

Eating in the town of Valsinni

There are only two or three restaurants in Valsinni where the locals occasionally eat out. Except for these, there are a few small food shops that sell snacks, appetizers, and local bakeries that sell traditional bread, cheese, and pastries. Most good restaurants are located in the nearby towns so visitors generally prefer to dine in the towns located close by. The one well-known restaurant in Valsinni that is quite popular among the locals is the Ristorante Pizzeria La Fontana which is located on Via Carmine. The restaurant serves pizzas, pasta dishes, and various other traditional Italian dishes.

There aren’t many places in Valsinni where visitors can shop. Except for the small shops where locals do their shopping, there aren’t any places to shop. Visitors can try some of the shops in the old section and in the newer town where a few pottery items and gift items are sold. Valsinni, Italy is an agricultural area so there are plenty of varieties of fresh fruits available in the markets. Visitors can also buy local varieties of fresh cheese that are sold in the bakeries and the food shops in Valsinni. Other than these, there aren’t many things visitors can purchase in town.