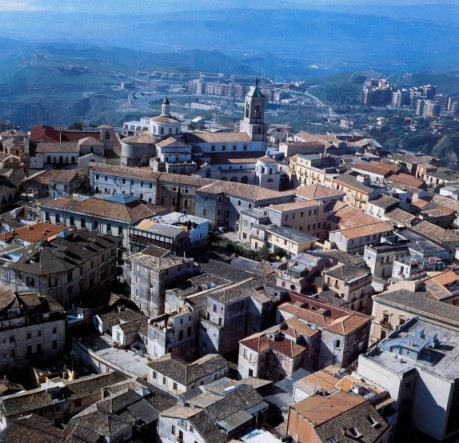 Catanzaro is the capital of the Calabria region in Italy and is also known as the “city of two seas”. Catanzaro is an urban region that remains immensely active and is an important tourism center in Italy. It stretches to a height of 600 meters from the sea and the coastal towns and overlooks the Gulf of Squillace and the Ionian Sea. The city is known for its strong winds and its notable silk industries that have been supplying brocades and silk to the domestic as well as the foreign markets. The city experiences a moderate Mediterranean climate with windy springs and autumns.

The beach, or as it is popularly known in this area, the Lido is situated only a few minutes away from the center of the city. The life of the city revolves around its beach since it is the main hang out place for the locals as well as the tourists. The sandy shores and the clear water make it a perfect place to relax on a sunny afternoon.

This ancient cathedral was first built in 1121 and was later rebuilt and renovated in the 16th century in the Renaissance style. During the bombings of 1943, the cathedral was almost completely destroyed but it has been restored to its original glory since then.

This is known to be one of the most important religious landmarks in the region. This ancient basilica is quite intimidating in size and is built in the famous Baroque style of architecture with huge marble columns supporting the structure.

Santa Teresa is also known as Chiesa dell’Observenza, and inside the structure is an ancient chapel which was built in the 16th century known as the Chapel of the Holy Sepulchre. There is also a famous statue made by Antonello Gagini within the chapel.

The Catanzaro Bridge has become the most famous landmark of the city since decades. It is a one arch bridge which has become immensely popular since it is one of the tallest bridges in Europe. Architecture lovers should not miss out on visiting this unique bridge.

Church of the Santissimo Rosario

This ancient church is one of the most beautiful churches in Catanzaro. It was built in the 15th-16th century time period with a renaissance façade. The church has a single nave interior with beautiful art work and carvings, a true feast for the eyes.

This is the main Piazza or Square of the city, named after the famous House of Grimaldi. The Square is the center point of the city and the main center of activity and attraction. There are several historic buildings and old structures located on all four sides of the Piazza, people meet and talk to each other here or just sit down and watch the constant ebb and flow of people. Several narrow streets and alleyways are located off the Piazza where one can spend hours strolling around and exploring the old shops and crumbling houses.

These are the remains of the medieval walls that were at one time standing tall and protecting the city from invaders. These are the two gates that remain of that ancient wall today, which was demolished in 1805.

This beautiful palace dates back to the 15th century when it was earlier used for residence purposes. The palace has now been restored and is being used as the current Town hall. Its impressive size and architecture make it an important place to visit in the city.

Catanzaro is served by the SS106 Jonica road which connects it to the A3 highway. Visitors can opt for car or a motorcycle rental; however, a parking permit as well as a license would be required. On the other hand, train travels are much more convenient, the regional trains run along the coast of Scilla and stop at Catanzaro. The closest airport is in Lamezia Terme which is 28 Km from the city.

Getting Around the City

The city center has a railway line with three centers. The metropolitan service has thirty trains operating and there are 11 stations strewn around Catanzaro; there’s a direct train between the town centre and the lido. Other than the trains visitors can also choose to travel through bus services. The AMC has 49 different bus lines for public transport which are quite comfortable and reliable. There’s also a cable railway that connects Piazza Roma to Pianocasa and Piè Sala.

There are plenty of options in terms of accommodations and hotels in Catanzaro. There are budget hotels as well as luxurious hotels, as well as hostels and apartments on rent for those who are planning to stay in the city for long. Some of the best known hotels in the city are Best Western Perla del Porto, Grand Hotel Paradiso and Hotel Palace.

Catanzaro has some of the best cafes, restaurants and bars in the region. The restaurants serve authentic Italian food that is simple but delicious, making use of its local produce and fresh sea food. Most restaurants serve the fresh catch of the day that is brought in by the fishermen every morning and have dishes that are designed around some of the best fish, shrimps and other sea food. A must try in Catanzaro is the local sea food risotto and freshly made pasta along with grilled fish.

Shopping in Catanzaro can be a lot of fun since you can come across quite unexpected things in the market. Apart from all the commercial stores that sell branded clothes and merchandise, the best places to shop are the local markets. These markets are quite colorful and lively and the best places to buy local merchandise. One of the best things to buy in Catanzaro is textiles since the city is quite popular for its silks and brocades. You can find a lot of trinkets and souvenirs made locally as well as various handicraft items to take back home with you as a reminder of your visit.