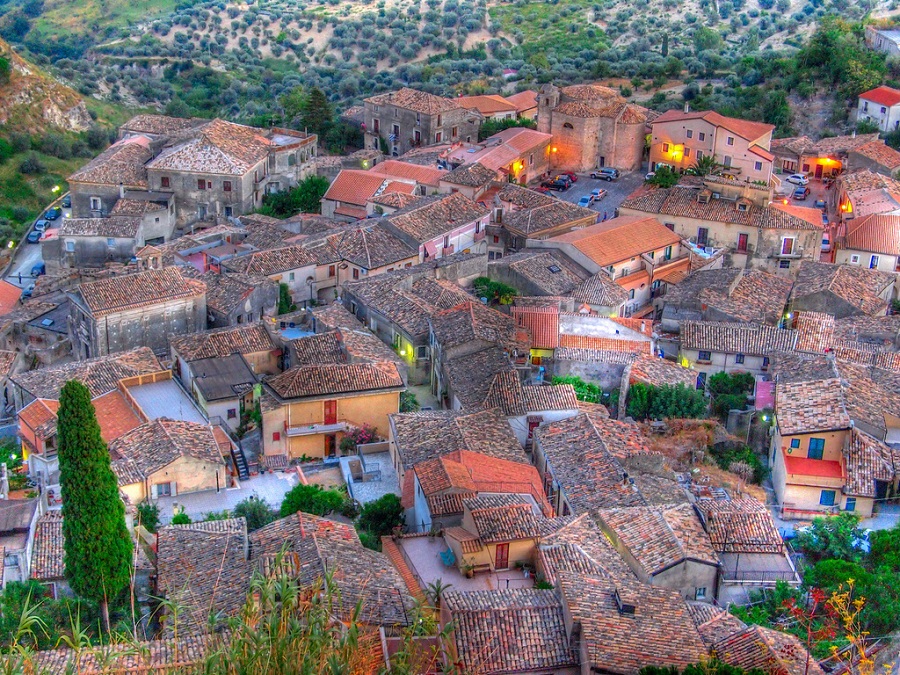 Gerace is a small town in the Calabria region of Italy, more precisely in the province of Reggio Calabria. The town is located a few kilometers from Locri and Reggio Calabria, on top of a hill which is made from sea fossils and is believed to have formed 60 million years ago. Gerace is spread over an area of 24 sq km and has a population of close to 3000. Let’s explore this beautiful Italian town of Gerace, Calabria.

It is believed that the region has been inhabited since Neolithic times and traces of the Sicels’ presence have been found in the area. The town later became a Roman military settlement.  During the 6th century, Gerace became an important town for religious, military, and administrative purposes and was known as Santa Ciriaca.

The Norman Castle in Gerace

The main sightseeing attraction in Gerace is its ancient Norman castle. Although the exact time of the construction is not known, it is estimated that the castle must have been built around the 10th century. The castle is located at the highest point in the town, on top of a cliff. Over the centuries, it has been renovated and expanded several times.

The Historic Center of Gerace, Calabria

The medieval town center of Gerace is another essential stop for your visit. This part of town has been very well preserved over the centuries and is characterized by very narrow lanes and streets. At one point, there were as many as 128 churches within this small enclosed area of Gerace: not many of these churches remain standing,  but it is still a fascinating place to visit.

The Church of Saint Francis was built in Gerace in the 13th century and has been renovated several times over the years. The architecture of the church is quite impressive and the interiors have been beautifully decorated. The main attraction inside the church is the altar. The precious altar has been decorated in true Baroque style.

The Norman Cathedral in Gerace, Calabria

One of the most important religious places to visit in Gerace is its Norman Cathedral. The cathedral is the largest in the region. Inside are a single nave and two aisles, divided by 13 columns which have been brought here from ancient temples in nearby Locri. The building includes the Prison of the Five Martyrs, which dates back to the 11th century, a crypt, open to visitors, and the Diocesan Museum.

The Church of San Giovannello or Little St. John is among one of the oldest churches in Gerace. It was originally built in the 10th century and has been rebuilt a few times over the centuries. The interior of the church has been beautifully decorated with precious ornamental decoration.

Among the many churches located in Gerace, the church of Santa Maria del Mastro is also worth visiting. It was first built in 1083, and what is interesting is that, until 1480, it was a Greek Orthodox church.

Getting to Gerace, Calabria

Gerace is a very small town with an area of just 24 sq km so the best way to move around is on foot. The main center of the town is very compact and most sightseeing attractions are located in close proximity to the center of the town. Except for the castle and a handful of other sightseeing attractions, there aren’t many places to visit so they can all be covered within a day. Visitors who have their own cars can also drive around to explore the nearby villages and the outskirts of Gerace.

Stay and Accommodation in Gerace, Calabria

Gerace is quite a small town but it has plenty of accommodation options to choose from. The town does receive its share of tourists from across Italy because of which there are plenty of good hotels, bed & breakfasts, agritourism homes and villas available. Some of the best places to stay in Gerace are Il Giardino di Gerace, La Casa nel Borgo, La Casa di Gianna, Le Contrade, Agritourismo Le Macine, Palazzo Sant’Anna, Bellavista, La Bouganville, La Sparviero and Casa Vacanze II Cavalcavia.

Eating in the town

There are several different restaurants, trattorias, and pizzerias in Gerace. Because of the rise in tourism in the area in the last couple of years, plenty of good options for eating are available. The cuisine available in most restaurants in Gerace is traditional Italian and regional dishes. One of the most well-known desserts in Gerace is Ravioli which is a type of sponge cake that is covered with sugar and cream and beaten egg whites are poured over as a dressing.