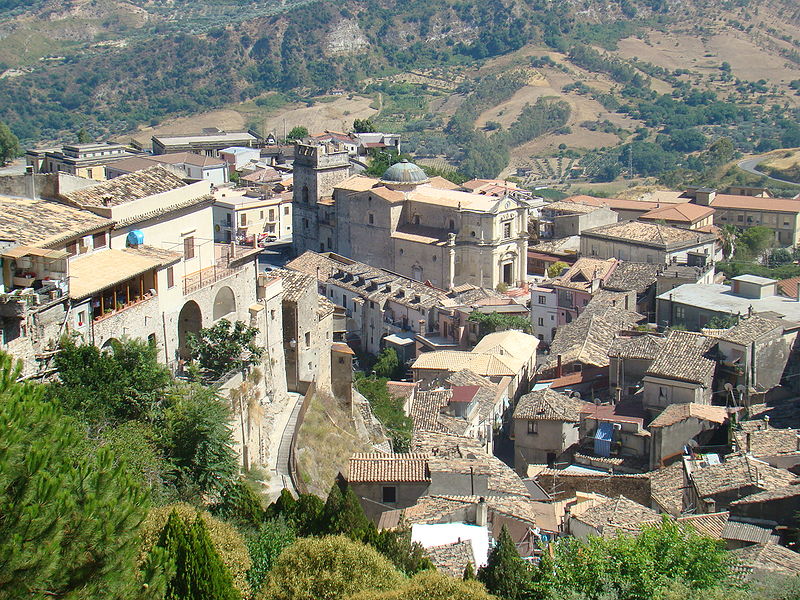 Stilo is a comune and town located in the Calabria region of Italy in the province of Reggio Calabria; it has been named one of the most beautiful hamlets of Italy. The town is Stilo is spread over an area of 78 sq km, has a population of 2800 and is located 151 km away from the city of Reggio Calabria. The economy of the region is based on agriculture, mainly the production of wine, cheese, olive oil and cereals. There are a few mines in the region for lead and iron.

The famous Cape Stilo is located only 10 km from the main town where the Battle of Punta Stilo was fought between British and Italians in 1940. It is believed that the town was first inhabited after the destruction of Kaulon, which was an ancient Greek colony.

The Cattolica in Stilo is one of the most important places to visit. It is a small temple which was first built in the 9th century. It is made in a true Byzantine style with a square design in the form of a Greek cross. There are three apses and five small domes. The natural light that floods in the building is quite fascinating; the four columns inside the building are believed to be taken from the Kaulon ruins. Inside the church are several beautiful frescoes which were only discovered in 1927. These frescoes date back to the 11th century and are a good example of Norman painting style.

The church of San Nicola da Tolentino is another beautiful church worth visiting. The church was built by the monks in Stilo and is now in a precarious condition. The size of the church is quite small and it has a beautiful trullo shaped dome which is covered by flat tiles. There are beautiful views of the sea and the surrounding hills from the church.

San Giovanni Theresti church in Stilo is built in a Baroque style and is decorated with beautiful stuccos. The church was built in 1625 and inside are the remains of the Basilian monks who dedicated the church to their saint.

The Duomo of Stilo was made in the 14th century but has been renovated extensively in the centuries after that. At one point of time the cathedral was one of the oldest Episcopal sees in the region. There are several noteworthy factors in the cathedral, the Gothic portal which is pointed and is surrounded by several small columns. Another beautiful element is the stone sculpture close to the portal which has two birds facing each other and is in the Norman style of craftsmanship. There is also a beautiful canvas Paradise from 17th century which was made by Batistello, a famous Neapolitan painter.

The Norman Castle is definitely worth a visit since it is one of the most interesting monuments in Stilo. The castle is built on top of Mount Consolino by Roger II. Visitors can reach the castle on foot through a path that provides beautiful views along the way. Only ruins of the castle remain today.

Stilo is spread over an area of 78 sq km but it is not very difficult to move around in the town. Most of the sightseeing attractions in Stilo are located close to the center of the town. The center is very compact and can be explored easily on foot within one or two hours. For travelling to the other parts of the town, visitors can use the public transport buses which are used by the locals for moving around and commuting. Visitors who have their own car can also easily drive around town since parking is not much of a problem.

There are not many accommodation options in Stilo, mainly because not many tourists stay overnight in town. Most visitors come to Stilo as a day excursion from the nearby towns and generally do not spend a night in Stilo. There are a few hotels and some agritourism residences to choose from. Two of the best known hotels in Stilo are Hotel Città del Sole and Hotel San Giorgio.

Stilo is known for its many delicious regional dishes which the visitors can sample in one of the traditional restaurants in town. The town is known for its home made fresh pasta which is made in the traditional manner and is served with several spicy sauces made from goat meat. Stuffed eggplant served with pasta is also very commonly seen in the restaurants here. Ristorante Parnasso is known to be a favorite with the locals here and serves authentic regional dishes and Italian food.

Stilo is mainly an agricultural commune so the best things to purchase here are the local food varieties for which the town is well known. Dried tomatoes, the capicolli or the soppressate pork sausages and the cumbite olives from Stilo are very well known. Visitors can also purchase various cheese varieties from Stilo like the pecorino cheese.

Ciao Maria,
Do not see any problem with that.
Mid May in Melito Porto Salvo and employees of the commune found all te records we were looking for…
Have fun and good luck.
Jacques Malaspina
Vancouver Canada

Hi
I’m from Australia and i I will be visiting Stilo early August this year. My mum was born in Stilo as were her parents, grandparents etc
I was wondering wether the public are allowed to go into the town records (commune) and search through birth, marriage records as i’m doing family research
Regards
Maria Leotta Martino