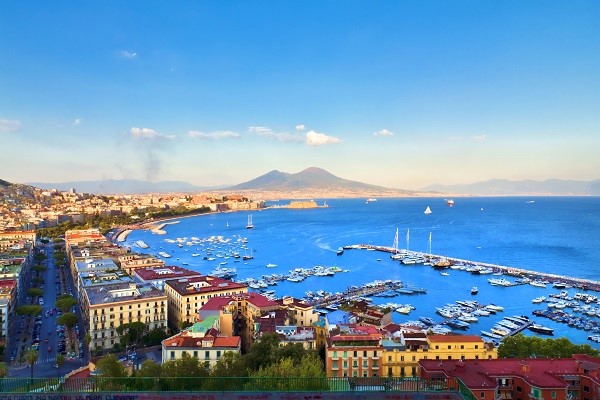 One of the most spectacular sights in the City of Naples is the Bay, a semi circular inlet on the Tyrrhenian Sea, southwest of the city. It is 32 kilometers long and 16 kilometers wide. Though small, the Bay is known for its scenic beauty, which is enhanced by the steep, volcanic hills that surround it, including Mount Vesuvius. The romantic islands of Capri and Ischia are close in proximity. Be sure to visit these while in the area, if time allows.

On one side of the Bay of Naples are Sant’ Elmo Hills and Capodimonte, while on the other lies the plain below the Vesuvius. The marvelous harbor was extensively restored in the 1990’s and is one of the most unique locations in all of Italy. There’s nothing more romantic and inspiring than viewing the Bay by moonlight. The vision will leave you in a state of wonder and enchantment, as you stroll hand in hand with that special love.

The historic city centre of Naples sits on the northern shore of the Bay. This historic city is divided into six districts. There is a lot to see and do in each. Choose carefully when planning your agenda as it’s likely you won’t have time to see everything.

The trapezoid five storey building located in the castle square is the Castel Nuovo. In 1990, it became the seat of the City Council and it is the site of the Palatina Chapel. Within this fascinating wonder is a maze of streets and alleyways that are begging to be explored.

In the early 16th century, the Quartieri Spagnoli sprang up. Today it is bordered by Via Toledo and Corso Vittorio Emanuele. Under Spanish rule, Naples was transformed with the building of palaces, churches and roads, including the extraordinary Via Toledo.

The earliest European theatre, the San Carlo, is still active today. It was attached to the Royal Palace when it was constructed to allow the royal family to enter and exit with ease. Take the time to explore the exquisite gardens of the Royal Palace.

An entrance arch to Galleria Umberto I is located in front of the theatre. It was inaugurated in 1892 as a symbol of neo-Renaissance and chosen by the new Italian State to recall the cultural and historic Age of Renaissance. The Theatre and Gallery are joined to Via Toledo. This area is rich in artistic and historical sights. Local residents love to chat and stroll here with friends and family. It’s a fascinating place to say the least.

On top of a hill to the north of Naples is the Park of Capodimonte, the largest open space in the city. The Royal Palace of Capodimonte is found within the park’s boundaries and displays paintings from the Farnese Collection. Among the masterpieces in the exhibit are works of art by such famous artists as Bellini, Botticelli, Martine, Raffaello and more.

Inside the palace tour the Gallery of Ottocento and view the collection of ceramics and porcelain from the Royal Factory in Capodimonte.

In 1738, Charles of Bourban ordered the construction of the Capodimonte Palace. The view from this building is stunning. Four thousand species of ancient trees grow in the Park’s woodland and are a spectacular feast for the eyes. In the center of the Park, stop to gaze at the Fountain of Belvedere while you listen to it sing nature’s song using the voice of gushing water.

People of the working class make their home in the districts of Vergini, Sanità and Fontanelle. Narrow streets and steps lead the way between humble residences and historic buildings, like the Palazzo Sanfelice, the Palazzo dello Spagnolo and the Astronomy Observatory. You will see historic churches, catacombs and cemeteries in this area.

The name SpaccaNapoli means “Split Naples”, and in fact splits the city from west to east. Roads 2 kilometers long and 6 meters wide, criss-cross the enormous piazzas of the area. On both sides, twisting mazes of quaint narrow alleys lead you this way and that in the old working class city. Historical architecture in the form of buildings, churches, squares and tiny artisans’ shops will delight you and take you on a trip into Naples’ past.

The Villa Floridiana was built in 1817, on the order of Ferdinand I of Bourban. It was originally built as the residence of the Dutchess of Floridia. Presently it houses the National Museum of Ceramics, which displays the private collection of the Duke of Martina. The Villa is set in a scenic park that plays host to groves, grasses, small but exquisite temples and trickling fountains. The beauty of the park will leave you breathless.

One of the most representative buildings of Neapolitan Baroque in Naples is the Charterhouse, which is dedicated to San Martino. Here you will find collections of cartographic maps, art glass, porcelain, model ships, paintings, sculptures and more. There is a particular area that is set aside for Manger Scenes which are made traditionally by local craftsmen. The Tavola Strozza, the first known depiction of Naples is the most prestigious work in the Museum.

If you wish to spend time in a setting where you can take life leisurely and relax, head to Vomero Hill. This section of Naples is home to historical coffee shops, museums, shops and monuments. Take the Montesanto cable car to the top and enjoy a panoramic view of Castle Sant’ Elmo and the Certosa di San Martino. Castle Sant’ Elmo has been exquisitely restored and today plays host to art exhibitions and cultural events. The Bureau for Artistic and Historic Works has several departments within the Castle. The building is an impressive structure in the shape of a six point star. Surrounding it is a large terrace, forts and ramparts. This is a unique and satisfying excursion for all.

Under the City of Naples is another old city where archeological dugs gave uncovered artifacts dating back 5,000 years. Magnificent funeral monuments were built by the Greeks underneath the city. Romans constructed tunnels and aqueducts. Parts of this underground block are open to the public if accompanied by a guide. Touring the underground city is an adventure that you will want to participate in.

This is one of the most important and leading archaeological museums in the world. It houses one of the most exotic collections of Roman-Greco antiques from Herculaneum, Pompeii, Stabiae and other sites from the region of Campania. Beautiful mosaics from Pompeii’s House of Faun, one depicting the Battle of Issus, fought by the Persians and Alexander the Great are on display. Delightful frescoes throughout the museum give you a glimpse into everyday life in the ancient cities, ranging from the coming of spring to the act of human sacrifice. A miniature model of Pompeii is one of the highlights of the museum.

Naples, Italy: The Birthplace of Pizza.

While in Naples, take a day trip to the Island of Capri, the playground of the rich and famous. Take a hydrofoil or ferry to the main dock, and then catch a tram to the city. Shop or enjoy a drink in famous Piazzetta Square or take a walking tour of the town to view the magnificent garden terraces, villas and historic churches.

The ruins of Pompeii are a must-see for all who love archaeology and history. The city, once a thriving town for wealthy Romans was completely buried when Mount Vesuvius erupted in 79 A.D. Pompeii is considered the most magnificent and important archaeological site in the world. The ruins give a unique view into the lives of ancient Romans. Included are amphitheatres, baths, mosaics, statues, shops, temples, homes, paintings and statues. Visiting the ruins will whisk you back in time to Ancient Rome and a lost civilization.

Caserta is only about 37 km from Naples. It has an amazing Royal Palace, the Reggia di Caserta, the Italian Versailles, with two amazing gardens, one Italian and one English.

There is no shortage of fine restaurants in Naples and they cater to all budgets. The cuisine is world famous and dining is traditionally a festive occasion. Naples is known for its cheeses, and is home to the famous mozzarella that is used in many Italian dishes. Tasty fresh seafood, delicious pastries and gelato is on every menu.

There is much to see and do in Naples. Be sure to take along a guidebook to aid you in choosing your daily excursions. It’s the vacation of a lifetime and one that will remain in your memory forever.