Have you ever wondered what Romans used to do in their spare time? Where would Roman Senators and nobility go during the hot, summer months? They all fled to Rome’s best-kept secret, a place called Stabiae.

Located on a panoramic bluff overlooking the Bay of Naples, only three miles from its famous neighbors Pompeii and Herculaneum, lies Stabiae, a little known jewel in the shadow of Mount Vesuvius. Here, powerful Romans built villas of extraordinary proportions, where they spent the summer months, away from Rome’s unbearable heat, and gathered to enternain, discuss politics, society  and, sometimes, to plot against each other. All happened over lavish dinners and exuberant feasts. The villas were filled with everything their hearts desired: from splashing fountains and pools, to saunas and indoor bath complexes. They spent their summer days walking along shaded porticoes and gardens where they could admire the breathtaking views of the Sorrento-Amalfi Coast.

These villas were filled with stunning art collections and every wall, ceiling and floor was covered in beautiful frescoes and mosaics. But one hot summer day in August 79 AD,  Mount Vesuvius unleashed its fury and silenced these marvellous estates for ever. The same violent volcanic eruption destroyed Pompeii and Herculaneum, and buried everything and everyone in its path: Stabiae, along with its legendary villas, was lost for almost 2000 years.

It was not until the eighteenth century that Stabiae’s beauty resurfaced. The town was partially excavated by the Bourbons (Spanish Kings of Naples who took over the south of Italy from 1734-1861): their archaeologists dug trenches and tunnels throughout the villas, grotesquely removing many of the most beautiful frescoes, which were sent to Spain and became part of the King’s private art collection. Because of the changing political climate, the lack of funding and the concomitant rise in interest in nearby Pompeii, excavations ceased in 1782. Trenches were soon buried, maps were stored in private libraries, and traces of Stabiae were once again forgotten.

Almost 200 years later, a local high school principal named Libero D’Orsi, a native of the modern day city of Castellammare di Stabia, and an avid historian, began excavations on the site with the help of the school’s janitor and an unemployed mechanic.

Thanks to their passion, they gained permission from the Superintendancy of Archaeology of Pompeii, which oversees all archeological sites in the Bay of Naples, to declare Stabiae a protected area and continue excavating. The 1950s’ excavations brought to light several enormous villas with porticoes, gardens and bold frescoes, but most of the 150-acre site is still largely unexcavated and unexplored.

The questions is: could the treasures of ancient Stabiae be unearthed from the ashes they have been lying under for the past 2000 years? An Italian-American foundation is trying to do just that. The Restoring Ancient Stabiae (RAS) Foundation is at the forefront of this ambitious project: to excavate the rest of the town and its villas. RAS, a cultural non-profit foundation in the US and in Italy (Fondazione Onlus) has been granted the right to complete the excavations of the spectacular Stabiae’s seaside villas, and transform the site into one of the largest archeological parks to date, bringing the site  back to its original glory. The archeological park project would cost an estimated at $190 million, two thirds of which would be funded by the European Union, if the remaining third could be raised through private funds.

Though the site is open to the public, and visitors are welcome to walk through the splendid villas, the plan for the archeological park at Stabiae includes extensive new excavations, as well as a visitor center, an onsite museum, public amenities, restaurants, walkways and an interconnecting transit system that allows tourists to reach Pompeii in only a few minutes. Trial trenches in June 2006 revealed a 300 meter-long columned courtyard. In Febraury 2007, further excavations have revealed the entrance to one of the villas.

In 2008, the Villa of San Marco and the Villa Arianna underwent extensive excavations, which brought to life large garden areas and cubiculae. The same year also witnessed the birth of the Museo Diocesano Sorrentino-Stabiese (the Museum of the Sorrento-Stabia diocese), where many artefacts from the Stabiae’s necropolis and villas are kept. This was an important moment in the history of Stabiae’s excavations, as the majority of the archaeological finds from the area have been disseminated all over the national territory (mostly in the National Museum of Antiquity in Naples), but very little could be viewed locally.

Further excavations (2009) have unearthed a road parallel to the northern walls of the Villa of San Marco, which used to join the town of Stabiae to the beaches. On the road, the remnants of one of Stabiae’s door have been discovered. Also in 2009, a perfectly preserved garden was discovered within the perimeter of Villa Arianna. More discoveries (a 1st century AD villa) have been made in 2010, during construction works for a local railway line. In 2012, a round of conservation works have provided new protection for some of the excavated areas.

The relevance of the project, however,  would not only save the vast artistic and cultural patrimony at Stabiae, but would integrate it actively within the area it belongs to, that of Castellammare di Stabia. This would certainly open new opportunities for tourism, cultural activities, and could well improve the economic development of the area itself.

However, it is essential to act quickly. The Stabiae area is, unfortunately, plagued by illegal building sites, which grow exponentially every year. In the long run, abusive building will no longer allow for excavations to take place. Even more painfully, anything left still to discover may be irremediably destroyed by builders and bulldozers. For this reason, it is truly important to support excavations with all means and immediately.

Join Us in Bringing Endangered Frescoes Back to Life!

A unique opportunity to help is offered by RAS’ own ‘Adopt-a-Fresco’ initiative.

A major part of the project involves saving the vibrant frescoes found at Stabiae. Amazingly, and thanks to the ashes that sealed the villas for so long, most of the frescoes are still on the walls and are extremely well preserved. Some of the most imperiled and delicate paintings have been detached for safe-keeping: they are, nevertheless, still in danger. Because of the immediate need to restore these unique pieces of art, RAS has selected a series of frescoes to be helped as soon as possible, also through the support of the general public. This is the first time the public has been asked to support RAS’ cultural mission. 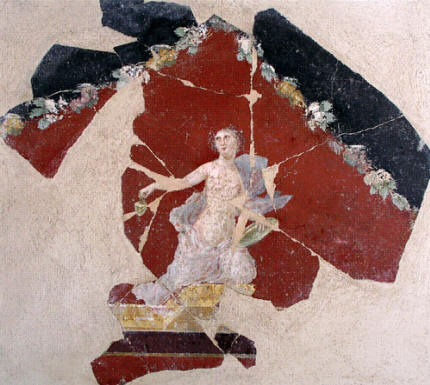 Sponsorship of a fresco would help restore it to the highest possible standards, it would free it from unstable backings, and make it easier and safer to transport. It would also provide  insurance coverage and help obtain archival space and maintenance. The donor(s) would then receive a mounted photograph of the restored fresco upon completion, as well as a plaque recognizing the donor’s name. The fresco will be accompanied by the donor’s name throughout RAS sponsored exhibitions around the world. Furthermore, the donor(s) would also be recognized as a beneficiary to the project with a plaque in their honor displayed at the on-site visitor center when the archeological park is realized.