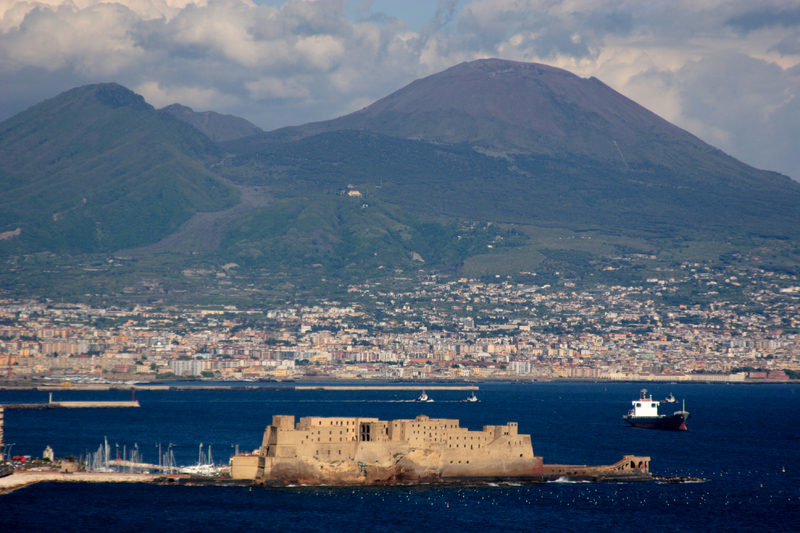 Goethe once said once you’ve seen Naples you can die. Whether or not this is true, is of course, debatable. However, what is certain is that one can’t appreciate the unique characteristics of the city or its people without taking into account that they live in the shadow of a mighty volcano. Mount Vesuvius, the destroyer of Pompeii, is still active today and the Vesuvio National Park was created in part to safeguard this famous volcano.

The park is also committed to promoting scientific research and environmental education in the area of Vesuvius, which is so rich in historical and geological interest. The territory of the national park has a unique natural and historical importance and produces agriculture unlike any other part of Italy. We must highlight here the most delicious tomato of Italy, the Sorrentine tomato!

Mount Vesuvius is located in the Campania plain and has two morphological structures, the Vesuvius Great Cone and Somma Caldera. The highest point of the Somma Caldera is Punta Nason, which reaches 1,132 meters. This also represents the remains of an ancient volcano, which was active more than 30,000 years ago. Valle del Gigante is a large depression that is divided by the Valle dell’Inferno and Atrio del Cavallo, which represents the inner parts of the old caldera. The great cone of Vesuvio is located within this space.

Mount Somma originated at the beginning of the Quaternary period and erupted several times from 6,000 to 3,000 BC. After a long period of dormancy, Somma began to tremble in 63 AD and again erupted in 79 AD destroying the towns of Stabia, Pompeii, and Ercolano. These three towns were completely buried under thick layers of ash and lava and are now one of the biggest tourist draws in the world. The structures and people preserved by the ash show an unparalleled glimpse into the lives of the citizens of the area at the time of the destruction.

According to various scientists, it was this eruption that gave rise to the Grand Cone of Vesuvius. Several other eruptions took place in the years 202, 472, 685, 1036, and 1139 AD and a very violent eruption occurred in 1631 when all of the villages located at the foot of the mountain were destroyed as the lava billowed into the sea, killing over 40,000 people.

Mount Vesuvius has been active in 1822, 1858, 1861, and 1872. These eruptions completely changed the profile of the land in the surrounding areas. 1906 saw another violent eruption before the last one, in 1944, which also destroyed many villages with ashes from the blast reaching as far as Albania.

Thankfully the volcano has not erupted since, although there have been various seismic phenomena that took place and prove Vesuvio is still quite active. In recent years the volcano has been studied very closely and various forecasts for future eruptions have been made. The observatory of Volcanology is located in the observatory zone in Ercolano, within the territory of the national park. The observatory was built in the 19th century and was the first of its kind in the world. The first-ever volcanological and seismic research took place here.

Flora and Fauna in the Vesuvio National Park

The slopes of Mount Somma and Mount Vesuvius are quite different from each other in terms of what lives and grows here. While Mount Vesuvius is dry and has been partly reforested in order to help stop landslides, the slope of Mount Somma is wetter and covered with woods. Many studies have been done in the area which shows that this area is home to more than 900 different species, a great portion of which are unique to the Mediterranean.

The fauna of the Vesuvius National Park is also quite interesting and rich. The oaken mouse is a very rare species of mammal, not found in other parts of the country. The other mammals found here include hares, wild rabbits, foxes, beech martens, and the dormouse. More than 100 different types of birds can also be found here, everything from the Coal Tit to the Raven. Birds like siskin, song thrush, wryneck, black redstart, and the woodcock can be found in the park during the winter months.

During migratory times birds like the nightjar, bee-eater, golden oriole, wood warbler, black-eared wheatear, redstart, pied flycatcher, subalpine warbler and garden warbler can be found travelling all across this region. There are also several types of reptiles, invertebrates, and amphibians in the region like green lizards, whip snakes, disc fingered geckos, green toads, and nocturnal and diurnal butterflies.

Each year several thousand visitors visit the Vesuvius National Park to see one of the most active volcanoes in the world. The national park is not only famous for its volcano but is also a place rich in flora and fauna. There are many other interesting things to do in the park-like hiking, biking, and visiting various museums.

There are two official trails for bikers: the first takes you from the Forest Reserve Tirone Alto Vesuvio to the ancient road leading to the volcano from Trecase, while the second route departs from the Observatory in Ercolano on to Mount Somma, which gives stunning views of the territory between S. Anastasia and Somma Vesuviana. If you prefer to walk, the park offers 15 interconnected trails including the Inferno Valley, Cognoli, Mount Somma, Tirone Reserve, Great Cone, Matrone Road, Vallone della Profica, Rack Train, and Lava River trails.

Local products you shouldn’t miss include the Catalanesca Grape, Del Monte Cherry, and Vesuvio Apricots. You should also try the local honey, a Nocillo, and Piennolo cherry tomatoes (as well as one of Naples’ famous pizzas). Also delicious are the area’s seafood and pasta.