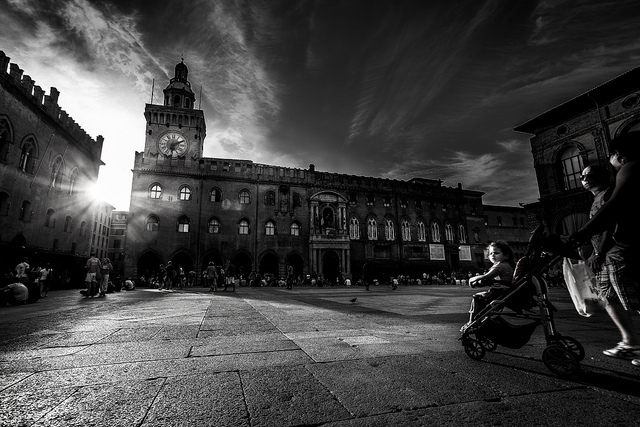 Bologna, chief town of the Italian region of Emilia-Romagna, has been given three nicknames:

“La dotta”, erudite, because of its well-known medieval University. The University of Bologna, founded in 1088 probably by a board of intellectuals led by the famous Italian writer Giosuè Carducci, is the most ancient Western academy.  People from all over Europe (among whom Dante Alighieri, Thomas Becket, Albrecht Dürer and Nicolò Copernico) have always come to Bologna to study with the best representatives from all fields so that the town became a more multicultural place, famous for the hospitality of its citizens.

The nickname “la rossa”, red, is due to the color of its roofs, the most amazing way to see them is from the tower “degli Asinelli”. The symbol of Bologna is made, in fact, of two towers, Garisenda and Asinelli; both towers were built around 1110 by the families who gave them their names. A legend says that the two families were fighting for supremacy so they decided that whoever built the highest tower would gain the power of the City. It is also called “la rossa” because, excluding short pauses, it has historically been politically towards the left, with its mayors coming from the communist or left wing parties.

Bologna is also called “la grassa” which means fat because of its delicious cuisine. If you visit, make sure you go to one of the many “trattorie”: they are cheap, cozy and old fashioned restaurants where you can taste all traditional Bolognese plates such as tortellini, lasagne, mortadella and many more. “Tortellini” is a delicious kind of pasta invented in Bologna, they are said to be made trying to imitate the shape of Venus’s navel; when the goddess stopped in an inn between Bologna and Modena the cook was impressed by her incredible beauty and created the first “tortellino” as homage to her. If you wish to try cooking a nice Italian dish you can buy a recipe book in one of the many libraries in the centre and find some typical products at the medieval market called “Mercato di mezzo” nearby the main square Piazza Maggiore, the quality and the prices are the best in town.

Piazza Maggiore has always been the centre of Bologna’s political, religious and economical life and offers a breathtaking view of the most important buildings. The unfinished San Petronio‘s Basilica, dedicated to the patron, Palazzo D’Accursio, the town hall with its wonderful merlons, Palazzo Re Enzo, Palazzo dei Notai, Palazzo dei Banchi and the famous Fontaine of the Neptune, are all symbols of Bologna. Twelve main streets starting from Piazza Maggiore arrive to the twelve ancient doors of the town connecting one to another from the “viali” that make a circle around the historical centre; these gates are Porta San Vitale, Porta Maggiore, Porta Santo Stefano, Porta Castiglione, Porta Saragozza, Porta San Felice, Porta delle Lame, Porta Galliera, Porta Mascarella e Porta San Donato, Porta Sant’Isaia and Porta San Mamolo. The “porte” were built during many centuries and also had moats and drawbridges but unfortunately Porta San Mamolo and Porta Sant’Isaia no longer exist. The twelve doors were also said to correspond to the twelve signs of the zodiac.

Bologna is renowned for its porticoes, you can see the most famous one, the Pavaglione east of the Basilica; nothing is better than having a walk under it and shopping without worrying about the rain! Some shops still have old wooden signs and amazing frescos on their ceilings, but from there you can also easily walk to the Galleria Cavour and buy clothes and accessories of the most fashionable Italian brands such as Armani, Prada, Fendi, La Perla and Gucci.

If you don’t feel like spending too much money and you’re more interested in arts, don’t miss:

– Museo dell’Archiginnasio: here you can see 7,000 heraldic armorial bearings and find the first book with the recipe of “tortellini”, a collection of Bolognese recipes of the year 1570.

– Museo Morandi: this museum holds the greatest collection of the painter’s works. Morandi is famous for his still life paintings produced in the early 20th century in Bologna.

– Pinacoteca Nazionale di Bologna: many incredible works of the best painters of the 14th century such as Vitale da Bologna and Gandolfi and of the 17th century like Carracci, Guido Reni and Guercino are laid out in its rooms: a great joy for all art-lovers!

Another interesting portico is in Strada Maggiore, close to the two towers, if you watch it carefully you will see three arrows stuck in the dark-wooden portico of Casa Isolani. The story says that a nobleman decided to have his wife killed because of her infidelities, when the hired killers arrived she showed up naked so that they missed the target shooting the arrow towards the portico!

During the Middle Ages, the rivers of the surrounding area were diverted to many artificial channels in order to make merchant navigation possible connecting Bologna to the Adriatic Sea. Today, you can visit the restored waterways underground thanks to some very interesting and fascinating tours by day or by night. A tiny little window that overlooks the Moline Channel called the “finestrella di via Piella” is surely worth a visit, Bologna looks like a little Venice if you watch it through this picturesque “finestrella”!

Bologna is not only a town to be visited for its historical and cultural interest, for its amazing churches (don’t miss the Chiesa di Santo Stefano also called the Seven Churches because of its seven chapels and the Chiesa di San Luca with its 666 porticos and its view on Bologna from the hills), but also for its nightlife. After having a delicious dinner you can go dancing in one of the discos in the centre, or listen to some good jazz in via Mascarella or even decide to go to one of the ancient theatres that offer a number of different shows, concerts and plays. So, if you are planning a trip to Italy, spend a couple of days in Bologna and you’re sure to have romantic and exciting memories of this town forever.