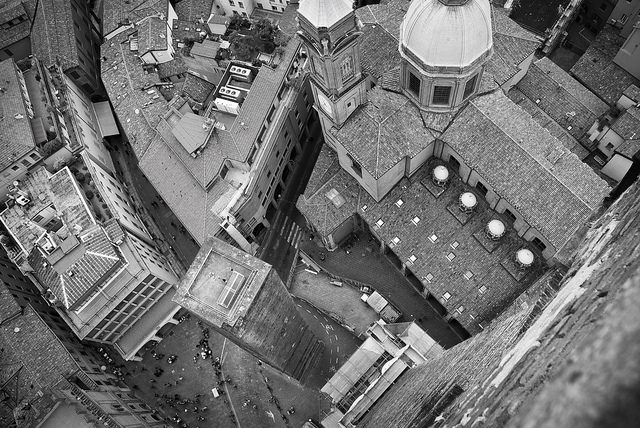 Where in all of Italy can you go when you can’t afford the prices in Rome and Milan? If you can’t stand the crowds in Florence and Siena, and the heat in Naples? The answer is Bologna! The greatest overlooked city in Italy.

Well, it depends on what you want really – but if you’re looking for plentiful cultural offerings, a vibrant nightlife, wonderful cuisine, and a beautiful, historic, and wonderfully unique city, there’s no better city to fit the bill than Bologna.

Beyond the Tourist Hordes

Despite a name that would make many Americans do a double-take and think Oscar Mayer, Bologna has a lot of attractions for the visitor. Not least among its attractions is the fact that there are far fewer tourists in the city than in its neighbors, Florence and Siena.

Bologna lacks the draw of heavily promoted tourist attractions that pull most of the package tours to the other cities. For the locals, this suits them just fine. They’re happy to live in a city that isn’t overrun by tour buses, and it’s a blessing for the visitor too, as it leaves the city free to be explored without the annoyance of big crowds and long lines.

One of Bologna’s charms is its sheer physical beauty. Much of the city comprises graceful brick buildings from every century of the Italian past, whose red-tiled roofs and ochre-colored walls gave the city its nickname of ‘Bologna the Red’. The city is also home to some magnificent palazzos and churches, wonderful examples of the wealth and prestige the nobles and the Church enjoyed in days past. And of course, there are the famous porticoes.

Bologna is famous for its gracious porticoes which serve as the arteries of the city, under which an endless stream of humans hurry along their way day and night. The porticoes were originally the city’s solution to an acute housing shortage during the medieval ages (most of the porticoes have rooms built above them for renting out) but over the years, they have also completely altered the face and character of the city.

The porticoes make the city wonderfully pedestrian-friendly, providing shade from the heat and rain. They also separate the foot traffic from the motored traffic on the streets – and considering the hazardous nature of Italian traffic, the speeding drivers, reckless motorcyclists, and lunatic truck drivers – that’s just as well.

To the Center of Bologna

Today, walking under the porticoes is the Bolognese way, as a symbol of the city as a gondola is to Venice. A visit to Bologna without a walk under the porticoes is unthinkable, and if you’re anywhere in the city center, almost impossible too. The porticoes run everywhere, even climbing the steep hilltop to the Santuario de Madonna di San Luca above the city, and Bologna is proud to say that it holds the record for the greatest length of porticoes in the world – some 40 km’s worth of covered walkways.

Once under the porticoes, a walk along Bologna’s main street, the Via Rizzoli, will inevitably lead you to the heart of the city, which is centered on the twin piazzas, Maggiore and Nettuno. The squares are framed on all sides by the grandeur of regal palazzos and the elegant structure of the Basilica San Petronio. The squares also serve as the parade ground of the Bolognese, where they come to meet friends, drink coffee in the cafes, do their shopping, and of course, to see and be seen, even in the coldest winter months. It is here that the visitor will go to do their people-watching and to sit in one of the cafes and enjoy the dolce vita alongside the Bolognesi.

If people-watching palls, off the squares, are a hodgepodge of alleys and quiet streets, filled with churches and worn down palazzos, quiet cafes and street markets, bars and restaurants. The area is charming for its medieval character – so medieval in fact that you almost expect a swordfight to break out around the corner – and is a pleasant place to get lost in for an hour or two.

If getting lost isn’t your cup of tea, then maybe a bird’ eye view of the city will be more interesting. For a breathtaking panorama, you can climb the Torre degli Asinelli, one of the two towers in the city center which picks up on the general leaning tower theme that Italy is so famous for. The tower was built to immortalize the Asinelli family, one of the prominent clans in the city. It stands 100 meters tall and climbing the innumerable stairs is definitely not for the faint-hearted. The view at the top is worth the effort however and from there, you can also admire the Torre della Garisenda. A bit less than half the height of the Torre degli Asinelli, this tower leans so much that no one is allowed to ascend it, for fear they might bring down the tower.

Vibrant Culture in a Radical City

Once you’re back on the ground, it’s time to see what else Bologna offers, and it is at this point that the city’s true appeal becomes apparent. What Bologna lacks in big-ticket tourist attractions, it more than makes up for in a vibrant, modern culture. In Bologna, the true sites of interest aren’t in museums or ruins – though it has a lot of those – but in the bars and the restaurants, in the art houses and theatres, the galleries and clubs and anywhere else where people might gather and express themselves.

Bologna is Italy’s most radical, most alternative city, the only one to have ever voted in a communist government in free elections (another reason for the ‘Bologna the Red’ sobriquet). The ingrained culture of free expression and experimentation has also created a freewheeling, complex, and vibrant political, intellectual, and artistic atmosphere, where opinions fly freely and find their expression in plays, songs, movies, and every other outlet imaginable.

Bologna is also the world’s first university town, famed for its universities which produced such students as Thomas Aquinas, Dante, Petrarch, and Torquato Tasso, and give the city its more dignified title, Bologna the Learned. The constant influx of students inevitably results in a plentiful of nighttime diversions, with bars, clubs, and other entertainments easily matching anything offered in the more crowded cities.

Bologna, a city of gastronomy

Of course, no visit to Italy is complete without trying the famed cuisine, and Bologna is certainly the place to gain an appreciation of Italian food. Not for nothing is the city also known as Bologna the Fat. Bologna is famed for its cuisine, which can be sampled in any of the plentiful restaurants, cafes, markets, and if you’re lucky, even in private homes.

Bologna is Italy’s gastronomic center, proud to boast that students from all around the world come to the city to learn Italian cooking at the various Italian cooking schools. The restaurants, cafes, and bakeries are just as proud to serve the best food they can prepare, and one of the most pleasant pastimes to engage in while exploring Bologna is to pop into any cafe that seems interesting and sample a dish from the menu. It’s an excellent way to experience Italian cuisine, but unfortunately, it’s horrible for the waistline. The best part is trying to decide which restaurant you like the most – there are enough good eating spots to make the choice a real challenge.

What with its historic charms, its vibrant culture, and mouth-watering cuisine, it’s a shame that Bologna isn’t better known than it is today, for it certainly has just as much to offer the visitor as its more glamorous sister-cities. Of course, the lack of promotions is also good for the visitor. After all, why share such a gem of a city when you can have it all to yourself?