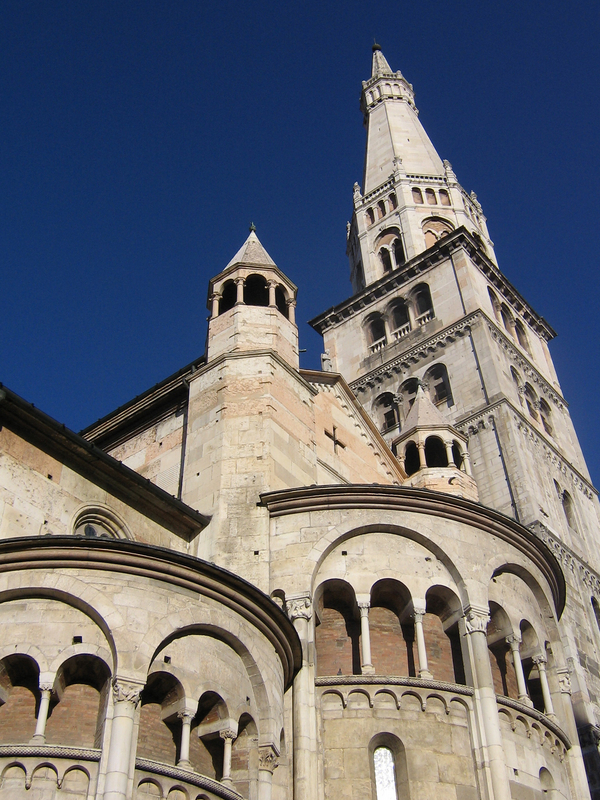 Modena is located in the Emilia Romagna region of Italy and is known for its various magnificent buildings and majestic monuments. A university town known as the “capital of engines” due to the luxury car makers based in or near the city, Modena effortlessly mixes the modern and the antique to great effect. Most famous for it its marvelous cathedral, or duomo, which was added to the UNESCO World Heritage list in 1997 along with the city’s Torre Civica and Piazza Grande, Modena is a city of beauty, architecture and culture that is sure to impress any visitor.

The cathedral of Modena is a Romanesque building that was consecrated in 1184 and is known to be one of the most important examples of Romanesque architecture in Europe. There were two churches previously built on the same location and subsequently destroyed. The construction of the current cathedral began in 1099 under the direction of Countess Matilda of Tuscany and is largely the work of two famous artists of the day, Lanfranco and Wiligelmus. Built over the sepulcher of Saint Geminianus, the patron saint of Modena, the duomo is a testatment to the genius of these two men and remains a must see for any visitor to the city. Centuries later the funeral of another of the city’s famous native sons, Luciano Pavarotti, was held in this cathedral.

While visiting the cathedral one will notice that the façade features various different architectural styles. This is due to the fact that following Lanfranco more details were added to the building by Anselmo da Campione in the 13th century, such as the cathedral’s famous rose window. An even rarer site are the two lions near the entrance to the duomo that date back to the Roman Age, thought to have been discovered while the foundations of the cathedral were being laid. One cannot visit the cathedral without marvelling at the reliefs on the façade, beautiful portraits of prophets and Biblical stories, created by Wiligelmus.

If the outside of the duomo is beautiful, the inside holds even more delightful surprises. The cathedral has three naves–a marble parapet between the crypt and the central nave, which displays the Passion of the Christ and the Last Supper. The pulpit is decorated with small statues made in terracotta and the noteworthy wooden crucifix dates back to the 14th century. The cathedral has two beautiful nativity scenes, which were created by two of the town’s best known artists, Guido Mazzoni and Antonio Begarelli.

The entrance on the northern corner of the cathedral, known as the Porta della Pescheria, has carvings on marble that showcase secular scenes and one famous carving in particular features life in the early Arthurian age. The carving on this archivolt has various inscriptions that have identified the work as one of the earliest sculptures showcasing the Arthurian legend.

The catherdral’s bell tower, also known as the Torre della Ghirlandina, stands 86.12 meters tall and over the years has become an important landmark in Modena. The tower can be seen from any part of the town as well as from outside the city.  The two marble railings at the top of the tower, or ghirlande, are the source of its name.

Originally built in 1179 the tower has five floors and was originally named Torre di San Geminiano. Various outstanding architectural details, such as the octagonal cusp, were added later.

Slip inside the tower to the beautiful Sala Della Secchia room to gaze at its 15th century frescoes, including a copy of the Secchia Rapita, created to memorialize the tower’s previous incarnation as the town’s treasury. On the fifth floor is the Sala dei Torresani hall, easily one of the most beautiful rooms in the tower and not to be missed.

The tower was under serious restoration from December 2007 to September 2011. During the restoration work, the scaffolding was hidden by a beautiful screen produced by Italian artist Mimmo Paladino.

The Piazza Grande is the location where the magnificent Cathedral of Modena and the Torre Civica are located. This grand piazza is the main square of the town and is known to be one of the best piazzas in Italy. The piazza itself has been a World Heritage Site since 1997 since it is the location of two extremely important architectural structures.

Any visitor to Modena would be pleased by the sightseeing to be had at the Piazza Grande, flanked on one side by the magnificent cathedral and on the other side by the intimidating Town Hall. Those interested in people watching will also love the Piazza Grande as it is one of the busiest places in Modena especially during peak tourist season. The piazza is also a favorite meeting place for the locals and a visitor to the city can join in with the natives on nightly walks, or passegiata.

Modena is a city that combines the new and old, the modern and the ancient, and beautiful monuments with great art. Nestled in the bustling Piazza Grande, the Cathedral of Modena and its bell tower are sights not to be missed.