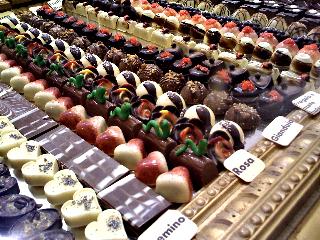 For the tenth consecutive year, Bologna, the culinary epicenter of Italy, has hosted an event on the magic of chocolate: the CioccoShow. Between the 18th and the 22nd of November 2009, all the best chocolate sellers of Italy gathered in this wonderful medieval town to showcase the many ways to taste chocolate. For those who missed this year’s event, not to worry, there is plenty of time to plan for the 6th annual CioccoShow in 2010. All chocolate lovers can discover the wonders of Bologna while visiting the many stands selling chocolate of all types that cover more than 2.300 square meters.

Bologna’s Palazzo Re Enzo, in the main square of Piazza Maggiore, hosts a Chocolate Lab where it is possible to discover all the secrets of this lovely food. In this Lab, there is an area dedicated to children where they are taught everything about chocolate and where they can try to make cakes and bring them to their families. During these sweet days, your children can also see the muppet show with the main characters of the Bolognese Commedia dell’Arte and many jugglers and magicians performing in the streets and squares of the historical center.

Don’t miss La Disfida della Sacher Torte, which is the challenge of Sacher Torte, one of the most famous and ancient pastries of Bologna. The Pasticceria Gamberini, challenges the well-known original Sacher Torte from Austria with its own version, who is going to make the most delicious cake? Listen to the music of the most famous Radio stations in Bologna (Latte e Miele Radio and Radio Nettuno) and find out about Italy’s Paths of Chocolate at the event called Cioccolato e Turismo, there are many Italian Spas and Hotels that offer chocolate treatments.

Do you feel like trying something very special? Join the Nero CioccoShow – CioccoShow in the Dark. Enter a totally dark room and let your senses go while discovering a sculpture of chocolate with the help of a blind guide who teaches you to pay more attention to all of your senses.

If you are a fashion addict, the Corte Isolani hosts the Fashion and Chocolate exhibition. Here you can see the fashionable creations made of chocolate by the Italian stylist Annamaria Magagnoli, such as hats, shoes, and jewelry.

Do you prefer arts? The CioccoShow has it too! Visit the photo exhibition Bologna la Golosa, Bologna la Sensuale hosted at the Biblioteca Comunale dell’Archiginnasio. The Ciocco Ciak in Galleria Cavour is where you can see chocolate reproductions of some objects of the cult movies of all times like the hat of Indiana Jones, the crystal shoe of Cinderella, the sunglasses of the Blues Brothers, the shoes of the Wizard of Oz, Rocky’s boxing gloves and many more. The Emporio della Cultura is where you can see the chocolate masters of Bologna reproduce the famous bottles that the Bolognese artist Giorgio Morandi represented in its paintings.

If there is any topic that is deeply connected to chocolate, it is with no doubt eroticism. At the Ciocco-Hot-Show you can taste the aphrodisiac chocolate made by the Maitre Chocolatiers of Bologna and see the chocolate reproduction of the bustier that La Perla created for Victoria Beckham. As your days of chocolate turn into nights have no fear of being left stranded. Your explorations into the best of Italian chocolate continue at night because the stands and the exhibitions stay open until late on Saturday for CioccoNight and all the best musicians and performers from Ferrara are in Bologna to bring some more fun!

Are you ready for the next CioccoShow? Bologna is waiting for you!