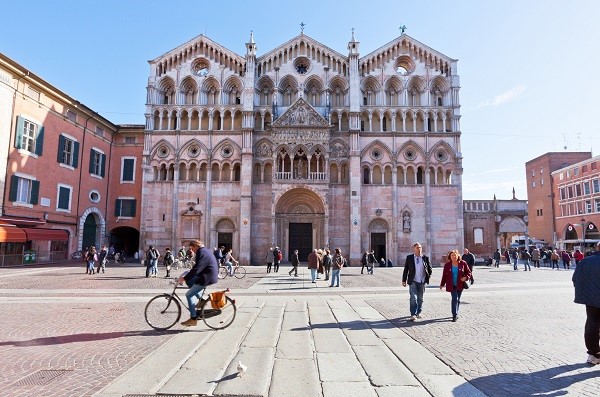 Ferrara is located in the Emilia-Romagna region of Italy, a few km away from the city of Bologna.

The town developed on a ford over the Po river and became a center for art and culture, which attracted several artists and intellectuals, especially in the 15th and the 16th centuries. The famous House of Este in Ferrara had been decorated by well known artists like Andrea Mantegna, Jacopo Bellini and Piero della Francesca. Here, the concept of an ideal city became a reality, and can be especially seen in the neighborhoods  developed in the 15th century by Biagio Rossetti.

Ferrara has been included in the list of world heritage sites by UNESCO, for its exceptional beauty and its important place in the culture and art of Italy. In 2006, Ferrara has also been made headquarter for the prestigious Italian Hermitage Museum,  because of its historical relevance. It is only the fifth city which has been able to have its name linked with this prestigious museum. The Hermitage Italy Foundation was formed based on this union.

The town in all its beauty

Here are some of the best known monuments and landmarks of the city.

The Castel Estense or the House of Este

The House of Este is also known as the Castle of Saint Michele or the Castle Estense and is one of the most important buildings in Ferrara. It is a medieval structure with a moat and is located in the center of the town. The castle is a quadrangular compound formed by several buildings, protected on their four corners by towers.

The architecture of the House of Este

The façade of the castle represents the vision of Girolamo da Carpi, who designed it in the 16th century. The structure is surrounded by a moat and has drawbridges and three entrances. The draw bridges are flanked with brick work ravelins. According to the original design there had to be a fourth entrance, but it was never made to allow enough room for the kitchen rooms.

The building still looks like a medieval fortress, especially at its bottom. Higher than that, the battlements were replaced with balconies which were elegantly made with white stone. Another storey was added and was covered with a skew roof. The towers were then improved and were made graceful with their roof top terraces.

The courtyard of the castle is quite austere, but has been frescoed. There were beautiful portraits of the ancestors of the Este family. Only a few of those frescoes still survive today and have been removed and placed under the castle’s portico. The castle is mainly known for its beautiful interiors and its many elegant rooms.

These are four beautiful living rooms, collectively known as the Gothic Rooms: they have beautiful cross-vaulted ceilings and the first one is the most noteworthy of them all, in name of the beautiful decorations that run all along the vaults. The portrait of Nicola II d’Este has been placed facing the entrance, and the room has been dedicated to him.

At its centre lies a scale model of the castle as it looked in the earlier years of its construction. The remaining three Gothic Rooms have been dedicated to Borso, Leonello and Alberto d’Este.

Beautiful views of the Castello Estense

The Loggia was converted to its current characteristics and its present day size by Alfonso I, and it evokes a strong sense of ancient day court. The walls of the hanging gardens were constructed based on the design of Girolamo da Carpi. Various old documents were found, which have good observations about the gardens and had allowed the recreation of their details, down to  the arrangements of their large flowerbeds and the small paths leading up to them. In the original 18th century design, only citrus plants were included.

The chapel inside the castle is known as the Ducal Chapel and is a small, elegant room which has geometric designs and lines. It is believed the room had been commissioned by Duchess Renée of France, who originally did not think of it in a religious light at all. However, the ceiling of the room has paintings of the Four Evangelists and a white eagle,  the symbol of the Este family.

Apart from the House of Este, Ferrara is also known for its many Renaissance palaces. Many of these still have terracotta decorations and there are not many towns in Italy to have such a large collection. Those in  the northern quarter of the town, the so called Addizione Erculea, since it was added by Ercole I in the 15th century, are particularly noteworthy. Among them, the Palazzo dei Diamanti is certainly the most famous.

The Diamond palace or the Palazzo dei Diamanti was named so because of the diamond points in which the stones of the façade have been cut. The National Picture Gallery is now housed in it, and has a large collection of art works of the 15th century School of Ferrara, which included names as Dossa Dossi, Girolamo da Carpi, Benvenuto Tisi and Lorenzo Costa.

One of the best preserved Renaissance homes in town is Casa Romei. The building was the residence of the famous Giovanni Romei, a relative of the d’Este family. The building was inherited by nuns, who lived in it and, for this reason it has been well preserved. Many of the decorations inside the palace have been saved.

There are several beautiful frescoes, especially in the Room of the Sibyls: the room has an original fireplace made from terracotta and bears the town’s coat of arms. The Room of the Prophets takes its name from the presence of several paintings of  Biblical scenes. The majority of the frescoes and painting within the palace were commissioned by Ippolito d’Este to Cesare Filippi in the 16th century.

Ferrara can be easily reached by car, from the Motorway A13 that connects Bologna to Padova and Venice. There are many parking places and then you can walk around town or rent a bike.

The train station is close to the city centre; the trains connect you directly to Padova (50 minutes), Venice or Bologna (30 minutes), from where you can get other trains to Milan, Firenze, Rome, Rimini, etc.

There are many options in Ferrara to stay overnight. The best hotels are:

Corte Estense in Via Correggiari 4A, in the town centre near the Town Hall

Corte dei Gioghi, a Bed & Breakfast and Agriturismo at 1 km from the Walls and 2.5 km from the town centre.