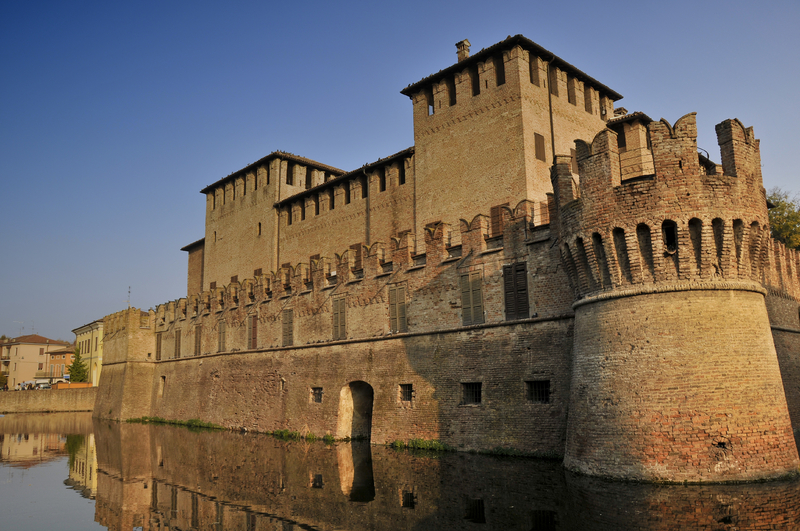 Fontanellato is a comune and a small town located in the Emilia-Romagna region of Italy in the province of Parma. The town is located close to the cities of Piacenza and Parma on the plains of the Po River. According to scholars the town was first founded around the 15th century and was built around the Rocca Sanvitale, the fortified home to the Sanvitale family.

However, the land where the town stands today has an older history. The area was already inhabited during the Bronze Age as several wooden pile dwellings of the Terramare culture had been found from the region in the 19th century.

The most important place to visit in Fontanellato is the castle which covers the medieval streets, lined with several small shops under wooden arcades. The castle is still surrounded by a large moat which is quite elegant and in fact sets it apart from most castles found in the region. The castle was originally built for defense in the 14th century on a square plan. Around the central courtyard are several arched windows built in gothic style of architecture.

There are several churches in Fontanellato, and Chiesa di San Croce is one of the most important. The church was originally built in 1447 and renovated in the 16th century. The valuable wooden baroque decorations were all added in 1673-1682. The bell tower of the church is late baroque style and the interiors are beautifully decorated with several art works and wooden carvings.

The sanctuary of the Madonna of the Rosary is a large complex that was built between 1641 to 1660. The sanctuary was built at the location of an older cloister. Much of the present day façade of late baroque was done in 1913 based on the designs of Ettore Ximenes. Inside the sanctuary are several beautiful frescoes which were made in the 18th century by Pietro Rubies. One of the most noteworthy aspects of the sanctuary is the wooden image of Madonna of the Rosary from 1615 and a large organ dating back to 1699.

Orotario Dell Assunta was built in 1572 and was completely redone in 1720. The interior was decorated by Antonio Bresciani in 1790 with several monochrome varieties and splendid vestry wooden masterpiece of late Baroque style which dates back to 1720. There are several important art works inside the building, most of which date back to the 17th and the 18th centuries.

There is no airport in Fontanellato, the nearest airports are in Bologna and Parma. Visitors can take a flight to either of these cities and reach Fontanellato either by bus or taxi. Visitors can also reach the town by state buses from the nearby towns. Buses depart a few times every day from Piacenza, Parma and Bologna as well as from other smaller towns of the province for Fontanellato. Tickets are available from the main bus stations and the buses are generally quite punctual. Those who have their own cars can also easily drive down to town.

Fontanellato is quite a small town; there are only a few places to visit that include the castle and a few churches. Most of the attractions are all located close to the center of the town so they can all be easily visited on foot. The center of the town is quite compact and the older sections all have narrow streets which can only be visited on foot. Visitors can also drive around the town to explore some of the other quarters or use local public buses which are mostly used by the locals for commuting. Many tourists also rent mopeds or scooters to explore the town as well as some of the nearby areas.

Fontanellato is quite a small town and except for a handful of tourists, not many people who visit stay in the town. Most people visit Fontanellato as day excursions from the nearby cities of Parma and Bologna. There are a few good hotels in Fontanellato, however most of them are basic hotels and not luxury accommodations. There are also some Bed & Breakfasts in Fontanellato that provide comfortable rooms at low rates. Due to the rise in agritourism in the region in the past few years, several country homes and villas are also provided on rent for visitors who want to experience authentic country living. Some of the best hotels in Fontanellato are Hotel Tre Pozzi, Albergo La Cascina and Le Notti in Villa B&B.

Fontanellato has quite a lot of good restaurants and pizzerias to choose from. Most restaurants in town serve local dishes and Italian cuisine; however, there are a few that also serve other European cuisines. The best thing to do is to choose some of the smaller restaurants in the older section of the town where the locals like to eat. There are also a few taverns and bars in town where visitors can get good wines and light appetizers. There are also many bakeries and cafés in Fontanellato where good traditional pastries are available. Some of the best restaurants in town are Culatelleria, Ristorante Europa, Trattoria Teatro, Ristorante Mezzadri and Osteria di Casalbarbato.

There are only a few places in Fontanellato where visitors can shop. The older section of the town has plenty of good shops where visitors can purchase handicrafts and some good antiques. The streets located close to the castle also have quite a lot of shops too, but most of these have expensive items. There are several good bakeries in town which sell good traditional desserts and pasteries. Visitors can also purchase local cheese and good quality olive oil from many of the food shops in town. There are also quite a lot of good wine shops where good quality local wines are available.