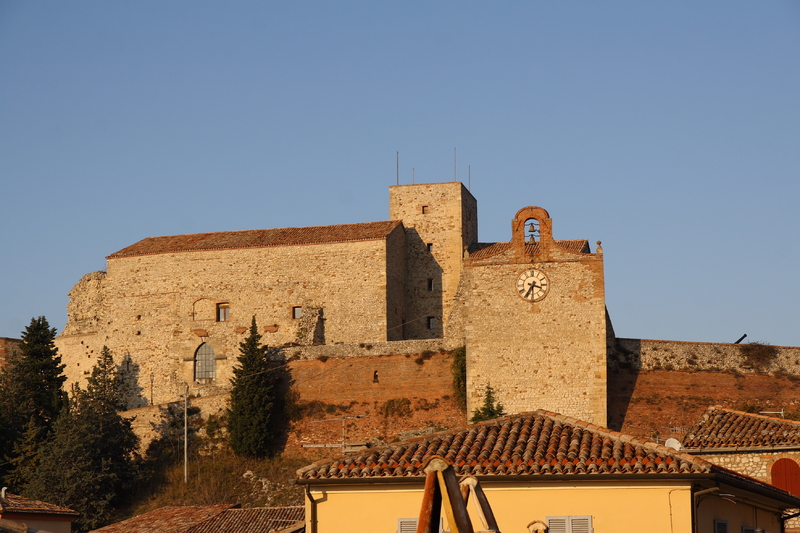 Verucchio is a small town and commune located in the Italian region of Emilia-Romagna, in the province of Rimini. The town overlooks the valley of the River Marecchia and is located close to the city of Rimini.

The history of Verucchio goes back to the 12th century BC when a settlement had been founded in Verucchio. The region had then been under the Etruscans. The town is located in a strategically important position, offering good views of the coast of Romagna and the surrounding countryside. The town is also famous as the birthplace of Malatesta da Verucchio and had been fortified by his successors.

Verucchio is located close to the cities of Bologna and Rimini. The easiest way to reach the town is by road. Visitors can reach Bologna or Rimini by train and then reach Verucchio by bus or by car. The bus stations in these cities have plenty of buses departing regularly for Verucchio. Tickets are inexpensive are easily available at the main bus stations. The closest airport is in Bologna so visitors coming from other countries or from other parts of Italy can take a flight to Bologna and then reach Verucchio. Tourists who have their own cars can also easily drive down to the town from Bologna and Rimini.

Except for the main castle and a few churches, there aren’t many places to visit in Verucchio. The center of the town and the older sections of Verucchio are quite compact and can be easily explored on foot. Also, these sections of Verucchio are characterized by narrow streets so navigating cars around them can be quite difficult. Visitors who have a car can explore the outskirts of the town and the neighboring villages by car. There is a local bus service that operates in Verucchio, but it would generally not be needed for exploring the town.

Malatesta fortress or Rocca Malatestiana is a large medieval complex. The complex is a collection of various buildings which were built over different centuries between the 12th and 16th centuries. The fortress is located at the highest position in the region on top of a rock and offers good views of the surrounding landscape. The castle had once belonged to the Malatesti family at the end of the 12th century. Quite a lot of the buildings in the complex have already been destroyed; however, the ruins of the main fortress and a 13th-century tower can be visited by tourists. There are several interesting rooms within the complex including the Great Hall where several items are kept on display. The dungeon and the top of the tower are also open to the public.

The archaeological museum of Verucchio has a small but interesting collection of objects and artifacts which have been found in the region during various excavations that have been conducted in the region over the years. Some of the objects on display date back to the Roman and Etruscan ages.

The Pieve of Verucchio was built around 990 AD originally and has an interesting mix of gothic and Romanesque architecture. The Romanesque style of architecture in the building is quite common to Medieval Europe with semi-circular arches, pointed arches, and other features. Although it is still not clear when these additions and renovations were done to the main building, it is estimated that would be from the 6th to 10th centuries. The Pieve has large columns, sturdy walls, and beautiful decorative arcades. The interior of the building is also well preserved and has been beautifully decorated.

The Franciscan convent of Verucchio is known to be the oldest in the Romagna region. The convent dates back to 1215 and has interesting architecture. Inside the church is a 13th-century painting that represents the crucifixion and is believed to be from the Rimenese School of painting. Outside the building is a very high cypress which according to the locals was planted by Saint Francis himself.

Verucchio is quite a small town and it only attracts few tourists each year. Most tourists visit Verucchio as a day trip from the neighboring cities of the province and do not generally spend the night in the town since there are only a few sightseeing attractions. However, there are a few hotels in the town that are mainly located close to the center of the town. Most of these hotels are quite small and offer comfortable rooms at low prices.

However, none of them are fancy or luxurious. Visitors can also stay in Bologna or Modena since there are many accommodation options available in those cities. Some of the best known hotels in Verucchio are Hotel Oste Del Castello, Gestioni Turistiche Sas Hotel Kennedy, Hotel The Colombarina, Hotel Al Poggio, Hotel Magnoli and Villa Fiore. There are also a few farmhouses located on the outskirts as well as some old villas located within the town which can be rented by tourists that plan to stay longer in Verucchio.

There are ample numbers of options for eating out in Verucchio. The town has a few good restaurants, pizzerias, and trattorias in Verucchio which serve simple home-style cooking at low rates. Food in Verucchio is quite wholesome and simple and is mostly traditional dishes and Italian cuisine. There are also a few bars in the town that serve good wine and traditional appetizers. Some of the best-known restaurants in town are Zaganti, Ro and Buni Hostaria, Pinela, Casa Zanni, and Alla Rocca.

Except for the markets where the locals do their daily shopping, there aren’t many places in the town where visitors can shop. The old markets in town have several shops that sell various food items, things for daily requirements, dairy products, and some handicraft items made by the locals. Verucchio has quite a lot of good bakeries where visitors can sample and purchase good pastries and desserts as well as local bread and cheese.