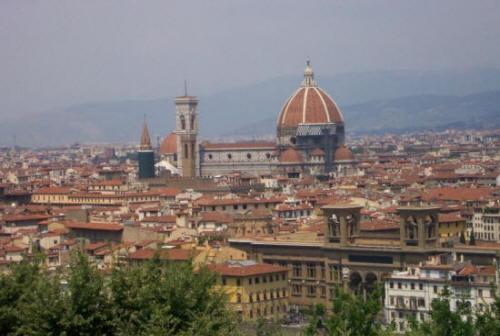 For tourists, the best months to visit the breathtaking city of Florence are May, June, September, and October. That is because the days are warm and long. Let’s see now some hidden gems of Florence you must see!

July and August are very humid, to the point that even Florentines tend to leave the city and seek the cool of the Apennines or the coast. This means that, very often, many restaurants and shops are closed: not the perfect situation to have while you’re on holiday on the other side of the Atlantic.

Florence is the largest town in Tuscany, of which is also Capoluogo di Provincia, and home to some of the most prestigious museums in the world (think of the Uffizi or the Galleria dell’Accademia, for instance). Its beauty, however, transcends the magnificence of its art, its architecture, its cuisine. Florence has a truly awe-inspiring touch. A touch that grabs you around sundown, when the entire city embraces its visitors with its amber-tinted glow: this alone is worth the trip.

If you plan a visit to Italy in the next months and Florence is part of your itinerary, we suggest you take a look at these special locations, where the beauty and the magic of this city reach their apex. Ready to explore some hidden gems in Florence?

This building, which is believed to have been Dante’s dwelling, is today a museum dedicated to the poet and his work.  Many photographs, papers, and other important works by and about the poet are housed in this museum, the Casa di Dante. Interesting as it may be as a museum, the casa is also at the center of diatribes because, in fact, there is little evidence Dante ever lived here: some believe he was born in its rooms, others that he moved in after getting married. No one seems to be quite sure how Dante’s House is tied into the poet’s life.

However, it is one of the most respected and admired tourist spots in the whole of Italy.

Dante’s House is definitely a must-see of the hiddem gems in Florence!

The museum is organized on three floors, corresponding to the different phases of the poet’s life.

The first floor has documents on Dante’s childhood, the second floor is dedicated to his exile, which started in 1301, and the scandal that caused it, and the third floor deals with Dante’s iconography and his fortune and fame as a writer and poet. It is located in the medieval area of Via Santa Margherita.

Full-price tickets are 4 euro (about 5.00 USD), but there are several reductions and children under 6 can visit for free. Opening times for the Summer months (April to the 31st of October) are 10-18, 7 days a week. During the rest of the year, Dante’s House is open Tuesdays to Fridays 10-17, Saturday and Sunday 10-18. You can find more information on the museum’s official website, where there are also plenty of details on events and exhibitions associated with the museum itself.

This estate was bought in the mid-1500s by the De Medici family and the construction of the park began under the supervision of Cosimo de Medici in 1563. It was at first designed for cattle raising but was later demolished and made into a courtyard garden around the second half of the 18th century. It is always open and the entrance is free. It’s a wonderful little step back in time to a farming estate that became a tourist attraction.

The Galleria dell’Accademia is one of the best-known museums in Florence. It houses Michelangelo’s David, Pietà of Palestrina, and The Four Prisoners. There is an art school right next door to the gallery. This is one stop that should not be missed when visiting the city. Opening hours are the same throughout the year: 8.15-18.50, from Tuesday to Sunday (in Summer it’s also open Tuesdays and Thursdays 7-10 pm). The only days the museum closes are Mondays, Christmas Day, and January First. Ticket prices change, but an adult ticket is 6.50 euro (about 8 USD).

The Basilica of San Lorenzo

The Basilica of San Lorenzo is the oldest church in Florence, and it’s also one of those hidden gems in Florence that don’t get enough attention! St. Ambrose, Father of the Church, consecrated this church, back in 393. The present structure of the basilica dates to 1423 and was built by Brunelleschi. This church houses works by Rosso Fiorentino and Donatello who, already in his seventies, sculpted two pulpits, the Pulpito della Passione (Pulpit of the Passion) and the Pulpito della Resurrezione (the Pulpit of the Resurrection), breathtaking in  their appearance.

Step outside the church and you’ll find the Biblioteca Laurenziana, the Laurentian Library, designed by Michelangelo by order of the de Medici family who simply wanted storage for their grand book collection. Today, the Laurenziana is home to some of the rarest manuscript documents in the history of Mankind. The library is used by academics and students alike and is regularly open throughout the year. Don’t forget that a whole section of the building, the so-called settore monumentale (monumental area) hosts several art exhibitions. Between the many other things you can see in the renaissance city, these hidden gems in Florence are definitely must-see!